We are happy to invite you to join the colloquium by MIT Professor – Kamal Youcef-Toumi. 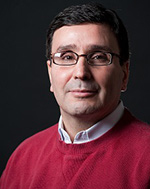 Kamal Youcef-Toumi joined the MIT Mechanical Engineering Department faculty in 1985. He earned his advanced degrees (M.S. 1981 and Sc.D. 1985) in Mechanical Engineering from MIT. His undergraduate degree (B.S. in Mechanical Engineering awarded in 1979) is from the University of Cincinnati. Professor Youcef-Toumi’s research has focused primarily on design, modeling, simulation, instrumentation, and control theory. The applications have included manufacturing, robotics, automation, metrology and nano/biotechnology. He teaches courses in the fields of dynamic systems; robotics; precision machine design and automatic control systems. Professor Youcef-Toumi was selected as a National Science Foundation Presidential Young Investigator “in recognition of research and teaching accomplishments and academic potential.” He served as a member on several professional committees of The National Science Foundation, Chairman of the Information Technology program within The Arab Science and Technology Foundation, Member of the review committee for European Union funded Network of Excellence for Innovative Production Machines and Systems, Member of the Scientific Committee for Qatar Foundation Annual Research Forum, Head of the Controls, Instrumentation and Robotics Area in the Mechanical Engineering Department at MIT, Member of the MIT Council for International Programs, and Research and Strategy Advisor for Qatar Computing Research Institute. He is the Co-Director of the Center for Clean Water and Clean Energy at MIT and KFUPM. Professor Youcef-Toumi has served as a consultant for a several companies including AT&T Bell Laboratories, EDO Corporation, Varian Radiation Division, Gillette Corp., Delta Search Laboratories, Jentek Sensors, Morgan Stanley Co., General Electric, TEKES – National Technology Agency of Finland, Jordan Hospital, Mitsubishi Electric Corp. Penn State University-College of Medicine – Cancer Institute. He is a member of IEEE and an ASME Fellow. He served as Chairman of the ASME Dynamics Systems & Control Division Robotics Panel. He was an Associate Editor of the ASME Journal of Dynamic Systems Measurement and Controls, the International Program Committee Chairman for the 2010 IFAC Symposium on Mechatronic Systems, and an Associate editor of the ASME’s Dynamic Systems and Control Division (DSCD) Conference Editorial Board. He has served as Editor of several symposia/conference proceedings. Professor Youcef-Toumi is the author of over 200 publications, including a textbook on the theory and practice of direct-drive robots. He holds over 30 registered/pending patents. Professor Youcef-Toumi has been an invited lecturer at over 160 seminars at companies, research centers and universities throughout the world.