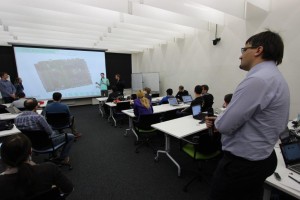 When you go to the beach, don’t forget to take with you a bathing suit, a towel, sunscreen and a robot. Why would you take a robot with you to the beach, you ask? It could save you some sand-castle-building and shell-digging time, so you can just relax, swim and get tanned. Does this sound far-fetched? Well, a team of Skoltech students is working exactly on that. This team is the representative of Skoltech to next year’s Eurobot competition which will be beach-themed. 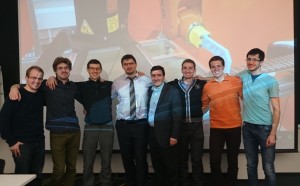 This team presented the current stage of their work in the final presentations of the Robotics course, under the guidance of Professor Dzmitry Tsetserukou. In the final
presentations six teams showed the fruits of their work, in different aspects of robot usage – from the beach-bots that were mentioned earlier, to the wearable haptic display assisting in nurse training. There was also a project that we cannot write about, because it’s a commercial secret (well, we can give you a hint – it’s a novel climbing robot). A special guest at the presentations was MIT Professor Kamal Youcef-Toumi, and he also participated in the assessment of the presentations and projects. At the end, the best project was awarded to the team who employed an existing robot – the industrial “Kuka” robotic arm – to manufacture the aircraft wing from composite material. Robot was programmed to form the arbitrary 3D shape from the aluminum plate of 0.5 mm thickness. Even more, industrial robot can play the guitar with music from “Rage Against the Machine”. 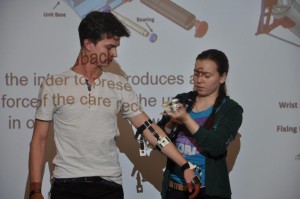 After the presentations were over, we asked Prof. Tsetserukou what he thinks of his students’ work: “this event shows that Skoltech passed the challenge and became a real world-level technical university,” he said, “Our projects also show the potential of our students. They had only ten days to accomplish these great projects, after a course of only 6 weeks – that’s why it’s so impressive. Honestly, I didn’t expect these results. It’s unbelievable”.

“We need to give them such projects, in which they can show all their skills,” he adds, “Professor Youcef-Toumi told me it was a wonderful, amazing and great event. I would say that probably even in MIT they never had such great projects in such short periods. They have longer lectures, less intensive projects, and in our case it’s absolutely impressive, in terms of technological innovation, IT skills, ideas of the projects and so we are really on the stage of technological innovation. We became very competitive. “ 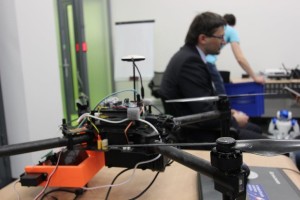 But the students’ capabilities is just one factor of success. They also need the infrastructure to put their skills into effect. And this is exactly what they got with the new robotics lab. Prof. Tsetserukou told us about it: “In Intelligent Space Robotics Lab we have almost all the stuff we need – we have the best 3D printer in Skoltech; the humanoid robot NAO, and we will buy one more; we have several drones – DJI Matrice, Phantom 3, the best drones on the market which is a platform on which you can put anything; we also have the Phantom omni haptic device with to 6 degrees of freedom; and of course we have all sorts of equipment, soldering stations, screws, and tools. Apart from one project, all the prototypes you saw today in the presentations were done here”. 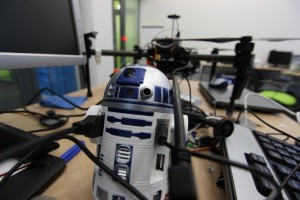 When we ask what’s going to be in the next room, he smiles widely and proudly “In the next room we will have the first lab in Russia to simulate the swarm of drones. There are very few of those in the world. It will be a little like a space station operation room”. 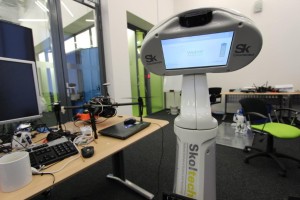 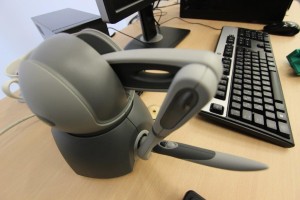 The “phantom omni” haptic device, which gets to 6 degrees of freedom