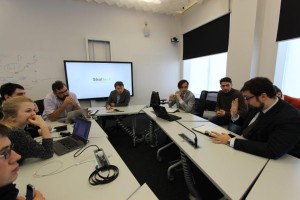 Skoltech’s Concurrent Engineering Design Laboratory (CEDL) hosted a workshop, titled “Skoltech Nano-satellite Workshop”, which was based on the opportunity for Skoltech to launch a 6U nano-satellite, or a constellation of smaller units, on-board a Progress launch vehicle headed to the International Space Station. This opportunity offered to Skoltech by the Skolkovo Foundation. The participants included members of the Skolkovo foundation space cluster, representatives from the industry – Skolkovo participant companies Dauria and Sputnix – and of course, Skoltech professors and students from the Space Center. 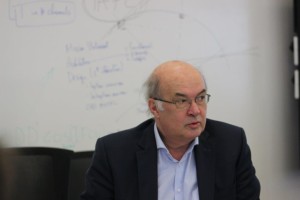 The goal of today’s workshop was to assess potential opportunities, define objectives for the mission, and to draw the roadmap for implementing the mission (the earliest launch opportunity is available on late 2017). The objectives were supposed to be relevant to the goals of entrepreneurship innovation of Skoltech’s Space Center and the Skolkovo Foundation. The scope and architecture of the mission will be subject of a feasibility study that will start in the following days. 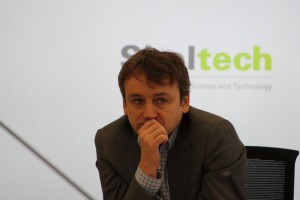 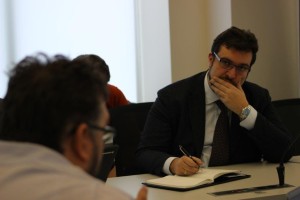 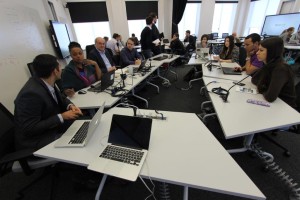 Discussing different aspects of the mission

Prior to the workshop, Prof. Alessandro Golkar, associate director of the Space Center, laid a clear vision of a promising future: “It will allow Skoltech to offer Russian and international partners the opportunity to collaborate with other nanosatellite missions occurring at the same time, creating the first open ‘space cloud’ in the world aimed at solving terrestrial problems and generating new business from space assets”.

The workshop began with a description of the launch opportunity, given by the director of the Skolkovo foundation space cluster, Alexey Belyakov. Afterwards, the participants divided to thinking groups and discussed different aspects of the mission, with emphasis on consolidating the mission objectives. The discussions were active and lively, and the atmosphere was positive.

The workshop ended with all parties satisfied. Prof. Golkar said at the end: “The workshop was very fruitful. We sketched a tentative plan, and we want to start a feasibility study for it soon. The participants were very enthusiastic about it, and the Foundation is eager to work with us on this project, so we are willing to collaborate in a closer way in space”.

Prof. Rupert Gerzer, director of the Space Center, shared his impressions from the workshop: “There were intensive discussions on strategy, mission scenarios, purposes, innovation potential etc. I especially liked the group discussions and the real workshop environment, where everybody, whether first year master student, professor or industry partner was equal and actively participating. The positive atmosphere was very supportive to this. I learned a lot only from the discussions!
The final result was a mission scenario that is ambitious and very exciting. It is great for the students: now the space CREI can offer them more and more actual projects and involve them in the ups and downs of “real life”. The workshop was also very helpful to get closer contacts with the Skolkovo Foundation, the Space Industry and Academia in Moscow”.