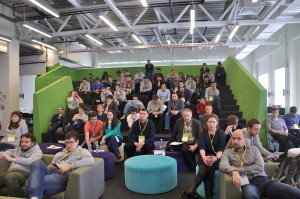 DeepHack Q & A, which is the International hackathon on deeper learning and machine intellect, took place on January 31- February 5 at MIPT. The participants tried their hand at solving the fundamental scientific problem – finding intellectual answers to questions about the world around. 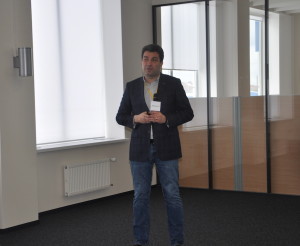 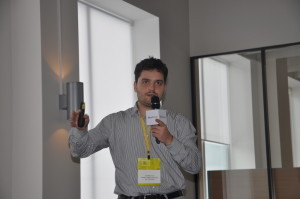 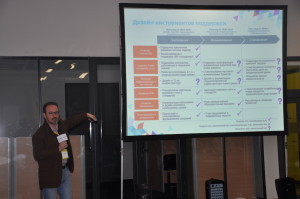 On February 6, the final day of the Hackathon, the event started with a presentation by Alexei Sitnikov, Skoltech’s Vice-President for Institutional and Resource Development, who welcomed the experts and participants in the institute, and then told the audience about Skoltech. “We make smart folks rich! We not only teach, but also explain how this knowledge should be used in practice”, said Sitnikov, “Any class you choose concludes with a practical application, making a prototype, a project, something that you can touch, see, and evaluate its effectiveness. This is one of the elements of the innovative approach to education at Skoltech. ”

The program of the final day of the Hackathon featured an abundance of scientific lectures and presentations. For example, in the morning Skoltech prof. Victor Lempitsky delivered a scientific and educational lecture. Lempitsky spoke about the Computer Vision group projects, which he has been leading at Skoltech, and appealed to all the hackathon participants interested in research and work in this area, to apply to Skoltech. Among the speakers in the second half of the day was especially memorable Evgeny Kuznetsov, Deputy General Director – Program Director, Member of the Board of OJSC “RVC”, who delivered a talk on how neuroscience will change the world and how one can participate in this. He also emphasized that the “start-up-related activities in Russia today are better developed than anywhere else in the world. It’s a nice overview of the number of start-ups, foundations and investments. However, whether it is necessary to change the higher education system radically, or rather increase the number of institutes to maintain this level, it’s already a rhetorical question”.

The main objective of the hackathon was to gather talented students, PhD students, young scientists and IT industry professionals for brainstorming over one of the most complex issuing – intellectual answer to questions using the classical methods of working with natural language and algorithms for deep learning. The results of research obtained in recent years have shown that the neural algorithms of deep learning significantly exceed the classical methods of working with natural language in tasks such as speech recognition, machine translation, definition of tones in sentences and parts of speech. But in the field of dialogue and question & answer systems, many problems still remain unsolved. 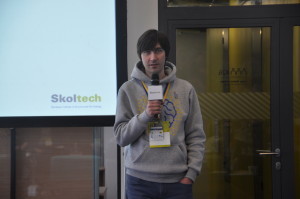 Mikhail Burtsev, PhD, organizer of the scientific school of the hackathon.

“We realized that those fundamental tasks that our team can solve, as practice shows, can be quickly implemented in the form of business products. And Skolkovo is just a place that allows you to establish an interface between scientific research and the final product”, Mikhail Burtsev, PhD, organizer of the scientific school of the hackathon shared the details of organizing this event, “In this regard, we came together and decided to make the hackathon in two parts. The first part consists of a research program, and the second one, the final day, is practical, when folks can present their projects and receive evaluation and support of Skolkovo”.
“However, the projects presented today”, added Burtsev, “won’t be related to the task that the team has been working on through the week. These projects have been created separately, but with the use of the deep learning technology.”

50 people were selected to participate in the hackathon, as they split into 12 teams. Their main task was to surpass the best world achievements in the question-answer systems to address The Allen AI Science Challenge – a topical scientific issue, published by the Microsoft’s Institute for Artificial Intelligence co-founder Paul Allen, on Kaggle (international competitive platform for machine learning). To this end, the participants developed an algorithm to produce software that can learn on its own to answer the questions of the level of the 8th grade of American schools. Within the hackathon’s scientific school, the world’s leading experts from Google Deepmind, Facebook AI Research, openAI, Skoltech and other research institutes delivered lectures on deep learning and its application to issues in natural language processing. As a result, all 12 teams that participated in hackathon, made it to top 50 out of the 700 teams, registered at Kaggle. 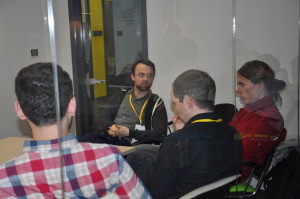 “I am grateful for the opportunity to participate in Hackathon and to be here today”, Rob Fergus, lead researcher at Facebook AI Research welcomed everyone, “It was very interesting to work with teams, folks asked good questions and offered exceptional solutions to set tasks. We look forward to seeing these people on a summer internship at Facebook AI Research”.

Unique prizes were prepared for the winning teams – a tour to the international NVIDIA GTC 2016 science & tech conference, an opportunity to get a mini-grant from the Skolkovo Foundation for the team, who would offer the most interesting business idea on the basis of scientific developments, a possibility of passing a summer internship at Facebook AI Research and more. 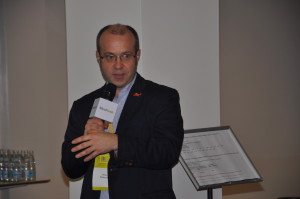 “Deep learning of neural networks is the most important direction of development of artificial intelligence technologies, which robotics needs so much. Therefore, it is very important for us to identify all the people who deal with this topic. We will offer them new, interesting challenges, solving specific application problems”, said Albert Efimov, Head of the Skolkovo Robotics Center, “As a special prize from Skolkovo, we decided to give the winning team a chance to receive a 5 million rubbles grant. This will allow the team to focus on the development of the project. Recognition by the expert community is an important step on the path to success. ”

The event was the second in a series of neural network hackathons, held by DeepHackLab and fundamentally differed from standard hackathons in its scientific orientation and the presence of the scientific school, and the final day boasted an unforgettable atmosphere. The general partners of the DeepHack Q & A Hackathon were Skolkovo Foundation, Skolkovo Robotics Center, Rostelecom, Segmento, NVIDIA, RVC, YADRO, LiveTech. Support also came from Vikium, Promobot, NVR, AnyWalker, Deloitte, Dataliticsolutions and the Moscow Institute of Technology. 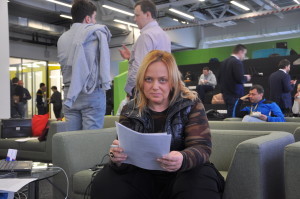 “I’ve visited similar events around the world – from California to Singapore – and would like to say that the level of the event, which organizers have demonstrated today, is definitely not lower than at other hackathons, and the emotional intensity of guys is even higher. The task of Skolkovo, in my opinion, is primarily to create an environment that will cultivate professionals. Such an environment, or even call it ‘soil’, has already emerged”, Olga Uskov, President of Cognitive Technologies group of companies, shared her impressions, “With regard to the projects themselves, we liked one especially, we will not say its name, but we have already suggested that the project drivers collaborate with us.”

Hackathon winners, who took the first place, was the team called Generation Gap. They got the opportunity to go to the international NVIDIA GTC 2016 science & tech conference and the right to be auditioned for the summer internship at Facebook AI Research. The runner-up was the 5vision team. A special Skolkovo Foundation prize has been granted to the “Ashmanov’s Neural Networks” team for their http://puzzle.ru project.

Stanislav Ashmanov, one of the creators of “Ashmanov’s Neural Networks”: “We are making a program that can conceive what is depicted in the photos and videos. Moreover, it can describe it in a language understandable by humans.  With the help of this program, it’s possible to automatize the video surveillance or social networking tasks. For example, by those images that a person posted to his or her profile on social networks, one can see what he or she loves, where he or she goes, what he or she wears, if he or she has a pet, etc. This information is useful for increasing the advertising conversion due to a better understanding of the client. Our software is based on the deep learning technology, neural networks that can rapidly process the image”.