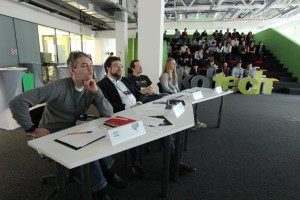 the panel of the judges and the crowd.

Oleg is at the red square and he needs to get to Skoltech. At the same time, Daria needs to get from the Bolshoi theatre (which is not far from the red square) to the Skolkovo golf club (which is pretty close to Skoltech). The question is what is the most efficient and economical way to take Oleg and Daria in one car? This challenge was presented to a crowd of 48 IT students from top universities in the Moscow region, in the Skoltech Hack race that was held today.

But this was only on the second stage of the day. At first, these students came organized in 13 teams. A week ago, these teams received a different technical-algorithmic problem, which they had to solve. Today, at the first stage, each team had 3 minutes to present its solution to the problem in front of a panel of Skoltech judges: Bram Caplan – Director for Student Affairs, Anna Nikolaeva – Manager for Student Outreach, Alessandro Golkar – Assistant Professor at the Space center, and Dmitry Vetrov – Assistant Professor at the Center for Computational and Data-Intensive Science and Engineering. 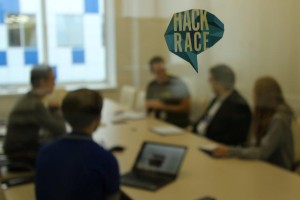 The judges move to the “aquarium” to decide which team won the first stage. 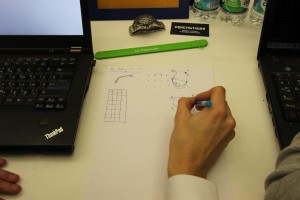 Trying to solve the second challenge.

The first prize of this stage went to the “MIPT hackathon gang”, a team of four young guys, who could easily be confused with a brit-pop band. The second prize went to their fellow MIPTians “AlphaTeam”. The third prize went to a mixed group of students from MEPI, HSE and MSU, named “Han shoot first”. Each of these three winning teams will win a dinner with one of Skoltech leaders.

After a lunch break, the teams gather in a different room to meet their next challenge, presented above. They are seated in pairs, deliberately reshuffled so no one sits with his/her team-mate. Boris Urman, Skoltech graduate and co-founder of Sharxi, delivers them the details of their challenge. They all have two hacking-hours to come up with the best result. The winners of this stage will also get a prize, a different one: a fast track to Skoltech’s selection weekend.

Anna Nikolaeva explains that the purpose of this Hack race is to attract students to Skoltech’s selection process before the deadline of February 22nd. “We try to evaluate their solutions, the scientific part of it, but we also evaluate their presentation”, she says, “We are looking for talented students who can become part of our start-up university”. If you think that you are talented enough to study in Skoltech, be sure to visit our application page, and apply before the 22nd.