We are glad to invite you to a seminar by Dr. Alexander Rudnev, titled “Synopsis of My Past and Current Research. Future Directions in the Field of Electrocatalytic Co2 Reduction” 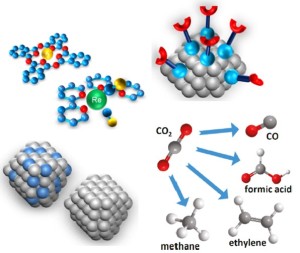 Currently, my research is structured along two main research areas: (i) molecular electronics and (ii) electrocatalysis. First I will talk about my current study on charge transport through individual organic molecules embedded between two electrodes. Numerous measurements of the conductance of single molecules were conducted when the molecules were in contact with gold electrodes. However, the usage of sp2-carbon-based electrodes is scarce. I will present our recent achievements on the measurements of asymmetric Au/molecule/graphite junctions. These junctions display rectification, and the conductance strongly depends of bias-voltage due to a non-constant graphite density of states near the Fermi level.

In the second part of the talk, I will present the current status of my work on electrocatalytic reduction of carbon dioxide (CO2) and the plan for a future work. CO2 is a cheap source of carbon, and the development of economically viable technologies for CO2-conversion is very beneficial. My research plan is relied on implementation of inexpensive nanostructured electrodes (Zn- and Sn-based catalysts for CO and formic acid production, respectively) and metal organic frameworks as catalyst materials for CO2 electroreduction. 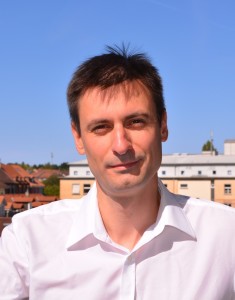 Dr. Alexander Rudnev completed his education (Engineer diploma) in Mendeleyev University of Chemical Technology of Russia in 2004 and started his PhD at the Frumkin Institute of Physical Chemistry and Electrochemistry, Russian Academy of Science (Moscow, Russia) under the supervision of Dr. Alexei Danilov. After PhD defense in 2007, Dr. A. Rudnev worked in the Frumkin institute as a senior scientist and in parallel at the NT-MDT Company (Zelenograd, Russia). In 2009, he joined as a postdoc the Electrochemical Nanoscience Group headed by Prof. Thomas Wandlowski, at University of Bern. In 2014, Alexander and his international collaborators were awarded with an EU research grant (FP7, FET Young Explorers), and he started working on his 3-year project (http://acmolproject.eu/) as a junior principal investigator.