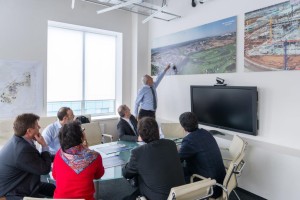 As young as it is, Skoltech managed to attract to its faculty numerous Russian professors who worked abroad, yet still a lot of Russian scientists work outside of their motherland. These scientists and researchers are scattered all over the world, but they don’t forget their origin. In 2008 they decided to found the Russian speaking Academic Science Association (RASA) in order to maintain, strengthen and develop common intellectual and cultural space of the Russian-speaking scientific community. Today the international association includes three continental associations: RASA-USA, RASA-Europe and the new RASA-Asia. The association brings together scientists, educators, graduate students and other scientific and technical professionals from universities and industry, as well as innovators and entrepreneurs in science and technology from the former Soviet Union, who are currently working or studying outside the Russian Federation.

Today Skoltech hosted a RASA conference under the title “Skoltech: Point of Access”. Four RASA representatives came to meet with Skoltech’s new President, Prof. Alexander Kuleshov, and to expose Skoltech’s students and faculty to the association, its structure and the opportunities it opens for Russian-speaking scientists. The small group contained some big names: Prof. Vladimir Shiltsev, RASA president, Director of Accelerator Physics Center at Fermi National Accelerator Laboratory (Batavia, IL, USA), member of CERN Machine Advisory Committee; Nikolay V. Vasilyev, MD, President of the Russian American Science Association (RASA-USA), Staff Scientist at the Department of Cardiac Surgery at Boston Children’s Hospital, Instructor in Surgery at the Department of Surgery at Harvard Medical School; Prof. Gleb Sukhorukov, President of RASA-Europe, Chair in Biopolymers at School of Engineering and Materials Science, Queen Mary University of London; and Prof. Elena Atochina-Vasserman, Adjunct Assistant Professor of Medicine at the Pulmonary, Allergy, and Critical Care Division of the University of Pennsylvania School of Medicine, who is also the director of the RASA center at Tomsk Polytechnic University. 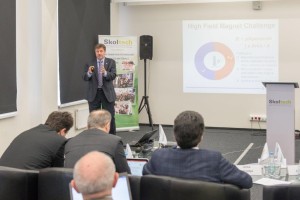 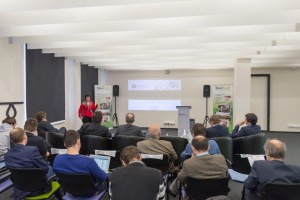 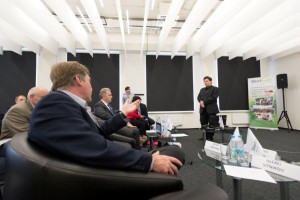 The professors presented the association and its networks, as well as their connections with the Russian federal government and with universities across the country. As an example for such cooperation, Prof. Atochina-Vasserman presented the structure of the RASA center at Tomsk Polytechnic University. After Speaking about the association, each of them presented their research, and answered questions from the audience.

In the light of the conference title, “Skoltech: Point of Access”, we asked RASA’s President, Prof. Shiltsev about the relations between the association and Skoltech. “We knew about Skoltech and we (many people from RASA association) made proposals for Skoltech CREIs, when their creation was just discussed. So that from the very beginning we communicated and knew what Skoltech is. Now Skoltech is undergoing a new step, because a new president was appointed recently. That is why we came here, in order to get acquainted and also discuss the mutual points of interest. Expat community may be a good resource for Skoltech. For example, Prof. Oganov, who was the President of American RASA sector, while he worked in the USA, and now he is Professor at Skoltech. We want to understand and find the possible ways of cooperation between Skoltech and RASA.
From our side we can also support Skoltech in finding professors and teachers for the university programs, courses and lectures. It could be a good way of mutual cooperation. Skolkovo is appearing on the global science map and we are happy to help and support”.

Prof. Atochina-Vasserman told us what are the advantages RASA can offer our Russian-speaking students: “At the current moment, RASA is open for scientists who work abroad. What I can recommend for the students of Skoltech is that if they are going to work or study outside of Russia, we will have a program for “young scientists” to work with RASA association. For them it will be great networking. They come and they meet people who already been there, who knows something, and they can ask questions. We have a network of many people who we know, and we can provide them the information. Knowledge is power and we have that knowledge to deliver to them”.