Alexander Kuleshov, the new president of Skoltech, officially took over from the four-year-old research university’s founding president, U.S. professor Edward Crawley, last month. In an interview with Mikhail Baklanov, chief editor of Sk.ru, Kuleshov – an expert in IT and mathematical modelling who has served on Skoltech’s board since it was founded – talked about his plans for the university, the difficulty of applying the U.S. model in Russia and the secret of creating innovations. A longer version of the interview is available in Russian here. 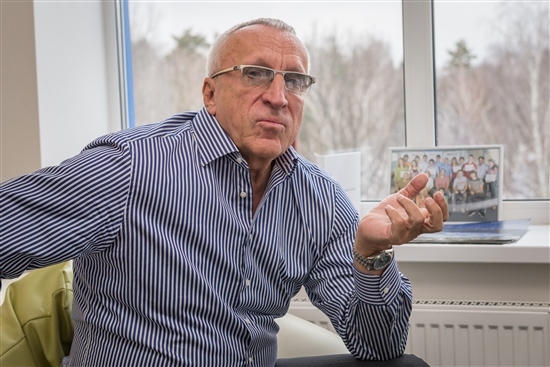 Academician Alexander Kuleshov has seved on Skoltech’s board since it was founded in 2011. Photo: Sk.ru

On the founding of Skoltech

In Russia, we had to build something from scratch. Why couldn’t Skoltech be created on the foundations of the Moscow Institute of Physics and Technology or Moscow State University or another existing university, since we have some excellent institutes? For precisely the same reasons that Peter the Great did not found his army on the foundations of the Streltsy [guardsmen] regiments, but launched his own regiments. The reason is quite obvious: there are certain umbilical cords that connect us with the past. The fewer there are of them, the greater the chance of achieving success.

On his plans for his presidency

I want to say right away that there will certainly not be any kind of revolution. A huge amount of work has been done, and I believe the first stage of Skoltech’s development has been successfully completed. Naturally, as with anything, there are certain questions, some glitches, some things to change: that’s a completely normally working process.

What success means in Skoltech’s case is absolutely clear. In the last 25 years, our [Russia’s] education, and to some extent science, has undoubtedly seriously deteriorated and has even entered something of a dead-end. In the 1950s and ‘60s, we had the best education in the world, everyone remembers how [U.S. President Dwight D.] Eisenhower, in response to the launch of Sputnik [in 1957], announced an overhaul of the American education system. And that was a natural response, because everything hangs on education, including science. Of course, science and education are inseparably linked, but education is primary. Though it’s true that there can be no education without science.

On the U.S. example

The beginning has been made, despite a lot of criticism, and this criticism of Skoltech was largely objective. I myself have been known to criticize certain aspects of it. We wanted to take the American education system, using [Skoltech’s partner university] the Massachusetts Institute of Technology as an example, and transfer it fully onto Russian soil. Maybe that’s not the right thing to do. Of course the basic parameters have to be adopted, the key approaches, the main basic principles, but perhaps it’s not worth trying to transfer everything 100 percent. But this only became clear when the theory was put into practice.

On the aims of a university

What is the task a university should aim to accomplish? That’s the eternal question: what’s more important, skills or knowledge? What proportions should they be assigned in? I’ve always had a clear answer on this issue: we need to teach a maximum of knowledge with a minimal focus on skills. Experience has shown that people with an extensive degree of knowledge and minimal skills can pick up other skills quite quickly, but not, unfortunately, the other way around.

On the age of learning

On talent in the regions

If previously, Moscow sucked up all the best scientists like a giant vacuum cleaner, now that’s not the case at all. It’s important to look at the provinces. In Moscow, the prestige of science has fallen dramatically, but the situation is better in the provinces. We need to refocus, and stop looking only at Moscow, St. Petersburg and Novosibirsk, and we are already taking steps to correct this. We have connections with Ufa, with the Far East, with Krasnoyarsk, Novosibirsk, St. Petersburg, in particular with Zhores Alferov’s academic university and so on. Incidentally, [Nobel laureate] Zhores Alferov’s saying that “Skolkovo is not the territory, but the ideology” has a lot of truth in it. The state gave Skoltech a lot, and we have to use that not just to create a small quantity of elite graduates, but to spread the new ideology of how to build the educational process. That’s very important. And to make it happen, we can’t just sit here inside these walls. We have to attract people here, we have to go out there ourselves – that’s a very large part of our work.

On the magic combination for innovation

Engineers really should live alongside scientists. Only out of this union does anything new appear. All our [Russia’s] biggest projects that remain a source of pride to this day – our atomic industry, space exploration and so on – they were successful because engineers and scientists worked on them together.

On what Skoltech lacks

What is Skoltech lacking? That which is usually called a Center of Advanced Studies: a small quantity of people who really are at the top of their field; genuine stars who nurture a small number of smaller stars around them. This would provide a certain flavor, benchmarking for the university as a whole.