Skoltech Institute of Science and Technology, University of Texas at Austin, and Massachusetts Institute of Technology scientists report the discovery of a new catalyst that significantly improves the efficiency of water electrolysis in alkaline conditions. The electrolysis of water to oxygen and hydrogen, is a reaction that is crucial to enabling emerging renewable energy technologies for the production of hydrogen. Their results were recently published in the journal Nature Communications.

Currently, there are a number of challenges for widespread adoption of water electrolyzers including high energy consumption, high cost and limited durability. For instance, the use of expensive precious metals like platinum and iridium limits implementation at large scale.

“The generation of oxygen from water remains a significant bottleneck to development of water electrolyzers and also in the development of fuel cell and metal-air battery technologies. If we could develop catalysts made with Earth abundant materials that could reversibly and efficiently electrolyze water into hydrogen and oxygen, we could have affordable hydrogen generation from renewables; and with that the possibility of electric cars that run on water with ranges similar to gas powered cars,” said graduate student and lead author of the study Tyler Mefford. “To develop these catalysts, we need to understand at the atomic level how these processes proceed and what factors of the catalysts influence their performance.” 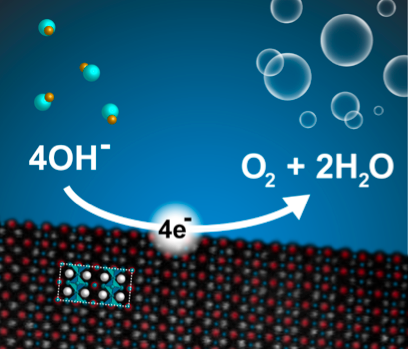 To overcome the limitations of current materials, the team led by Prof. Keith Stevenson, synthesized a series of cobalt based perovskite oxide catalysts where the properties of the materials could be controllably modified by the substitution of the element strontium into the catalyst structure. Through collaborations with researchers at the Massachusetts Institute of Technology (Prof. Alexei Kolpak) and the Skolkovo Institute of Technology (Prof. Artem Abakumov), the team was able to precisely measure the surface and bulk properties of the catalysts and model how the alkaline water electrolysis reaction proceeds based on these insights. Two crucial parameters were identified as important to the performance of the resultant catalysts—the covalency of the cobalt-oxygen bond, or how close in energy the electrons in cobalt are to the electrons in oxygen, and the amount of oxygen vacancies, sites in the crystal structure that should generally have an oxygen atom but are vacant in the very active catalysts. Using these parameters, the team developed the catalyst strontium cobalt oxide, SrCoO2.7, that can perform the water electrolysis reaction approximately twenty times better than the leading industrial catalyst, IrO2, at a significantly lower cost.

The team found that the enhanced performance of the catalyst was facilitated by participation of the oxygen atoms inside of the surface of the crystal. Previously, the assumption had been that the reaction proceeded through species exclusively at the interface of the catalyst and water. Although more work needs to be done to further increase the performance of water electrolysis catalysts, the work provides a deeper mechanistic understanding of the chemistry of active catalysts. The work also clarifies materials design strategies to accelerate the discovery of additional Earth abundant non-precious metal oxide catalysts. “We now have a new archetype of an improved catalyst for alkaline water electrolysis that provides the momentum to overcome the current materials constraints that hinder the successful adoption of water electrolysis, fuel cell and battery technologies,” said Stevenson.