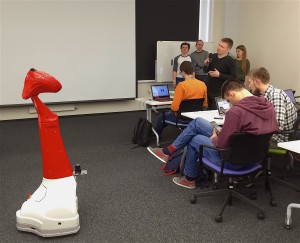 As the 3rd term of the academic year came to its end, Skoltech students presented their projects created in the robotics laboratory, at the final seminar “The Age of Intelligent Machines” of the “Dynamic systems and control” course.

The participation in the courses and the competitions is aimed to help students to develop practical skills in robotics for specific tasks. They master the design of mechanical parts, electronics, coding, but not less important is the development of teamwork skill. 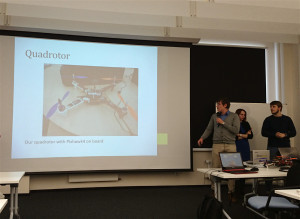 Apart from their knowledge, creativity and dedicated staff of teachers and advisors, the students had for their disposal both the new Robotics lab, and a special grant. Prof. Tsetserukou expressed his appreciation and gratitude for that: “I want to thank Igor Seleznev, Director of Research Programs. Thanks to a grant from the Unmanned Vehicle Program, one team was able to develop a guidance system based on monocular visual odometry. The system uses a web camera to determine the position quadrocopters, without the use of GPS-sensor”

At the end of all presentations, the judges announced the winning teams. As in past years, the judges took in consideration ideas and its compliance to applied robotics, as well as how the project relates to the curriculum. Apart from professor Tsetserukou and Lempitsky, the panel of judges included graduates Dmitry Suvorov and Roman Zhukov, who themselves participated in past seminars like this. 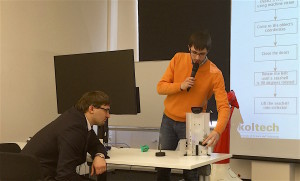 “We have seen a growing level of the participants and how they implement their projects”, said Roman Zhukov, “Three years ago, when it was just the beginning, the main part of the course was theory and calculations. On the second workshop, it was already 50:50 modeling and application development. In this current presentation we saw an even larger share of applied results. This shows that students actively use the equipment, and learn to work with it.
An important practical aspect is the teamwork on the project – during preparation for the workshops the teams has all to become a basis of future startups. For example, our technology created for participation in the Eurobot contest, formed the basis of our startup Webot“.

In this spirit, we wish great success to all the teams, hoping they will all manage to commercialize their ideas. Our congratulations go to this year’s winners: team EuroBot with their robots for future Eurobot-2016 contest, and team Autonomous Navigation of Mobile Robot. Well done and good luck!