We are glad to invite you to a seminar by Dr. Konstantin Popadin, titled “Severe Mutations in the Human Genome Help to Uncover a Functional Link Between the Genome-Wide Burden of Weak Mutations and Fitness”

Our genome is not perfect. Each of us carries thousands of slightly-deleterious or weak mutations. Even though most of these mutations individually have a small effect, their cumulative burden could substantially reduce the fitness of an individual. Despite its basic importance for medical, population and evolutionary genetics this burden of weak mutations is still poorly annotated.
In order to link the burden of weak mutations with fitness I introduce and elaborate upon a new genetic handicap approach, stating that an individual bearing an extremely severe deleterious variant (i.e. a genetic handicap) is viable at birth only if the genome-wide burden of weak mutations is sufficiently low. The rationale of this hypothesis is that only highly fit organisms, carrying a low mutational burden, are able to tolerate the effects of severely-deleterious mutations and survive.
I plan to validate this genetic handicap approach on theoretical (mathematical and computational analyses), empirical (approximation of the mutational burden in human handicap-carriers and controls) and experimental scales (proof-of-principle evolutionary genetic experiment with yeast). As main models of the genetic handicap in human population I use trisomy of chromosome 21 (Down Syndrome), rare large-scale copy number variants and consanguinity. In my talk I will focus mainly on genomic and transcriptomic data of Down Syndrome individuals, presenting several lines of evidence that live-born Down
Syndrome individuals have a decreased genome-wide burden of weak mutations as compared to control, euploid, population. 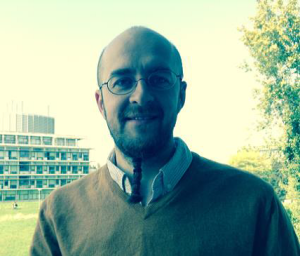 Dr. Popadin is an evolutionary biologist by training (Department of Zoology of Vertebrates, Lomonosov Moscow State University, MSU, Russia). Supplementing it by a batch of statistics and mathematics
(Department of Applied Mathematics and Cybernetics, MSU) Konstantin started to work in the field of evolutionary genetics. His main interest is a role of slightlydeleterious (weak) mutations in evolution.
During his PhD in MSU Konstantin investigated the rate of accumulation of weak mutations in different mammalian species and their potential effect on species extinction.
During his first PostDoc in USA (Harvard Medical School) and Russia (Institute for Information Transmission Problems) Dr. Popadin analyzed effect of weak mutations on human aging.
During his second PostDoc in Switzerland (Geneva Medical School and, recently, Center for Integrative Genomics in Lausanne) he analysed effects of weak mutations on human fitness. Here, Konstantin found out that carriers of severe mutations might have a deficit of weak mutations genome wide. This observation forms a backbone of his research line for several next years.