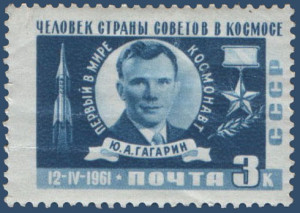 55 years ago, on April 12th 1961, Russian cosmonaut Yuri Gagarin became the first human in space, making a 108-minute orbital flight in his Vostok 1 spacecraft. We took this opportunity to ask Skoltech’s founding president, Edward F. Crawley, to tell about this event’s influence on America and on him personally. Here’s his interesting story:

“I was seven years young when Gagarin took the first flight, and I would have to say that this was the single most important event in my life, for several reasons. First, it shocked America. I have at home a copy of “Life” magazine from 1958 (see image below) that talks all about the virtue of Soviet education, and how Soviets are learning science and technology and Americans are playing baseball. The most immediate effect it had was the decision to teach foreign languages to students in schools, including Russian, which was never done there. Because of Sputnik and Gagarin I was taught French, when I was in first and second grade. Russian was introduced in high-school, when I was in tenth grade. Because of the three years I studied Russian in high-school, I continued to studying Russian in college. Russian in college was taught exactly because of these events. Basically all of my preparations that led me to my first visit in the Soviet Union, is a direct outcome of these events. 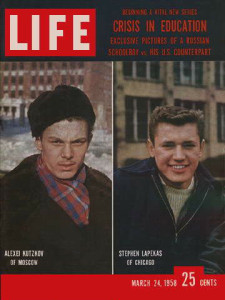 “The second thing is the space race that started with Sputnik and Gagarin – It became my life. I decided to become involved in the space business by the time I was 15 years old, and it was one of the reasons I decided to study Russian, so I could have a career in the space business and work with the Soviet space program. What I had from a very early age, for some reason, was the determination that I would try to help the Soviets and the Americans work together in space. So I learned Russian in order to be able to have a career working with the Soviet space program, and this was my motivation from the very beginning. I studied Russian, then I got to MIT, and then I studied cosmonautics, so I had all these stepping stones.

“As a junior at MIT, I came and spent one semester in the Leningrad State University, studying Russian. This is all I was allowed to study as an American in the Soviet Union. I wasn’t allowed to learn physics or anything related to space. Then I went back to MIT and became a graduate student, a young researcher and a young professor.

“In 1987 I had the first opportunity to come and be a visitor in the Russian Space Research Institute in Moscow. After that week and a half in Moscow I started going to the Moscow Aviation Institute, as a visiting professor and in fact made good contacts with the Soviet space business of that time.
Let’s skip to 1993, when I was on the presidential commission of then new president Clinton, to make a decision about what to do with the plans for the international space station. And I, along with a couple of other colleagues on that commission, pushed very strongly to the idea of a joint space station between the Americans and the Russians, which of course became the ISS. So in the spring of 1993 I more or less fulfilled my life’s ambition, which was to try and get a major joint space program between the United States and Russia.
“In the spring of 2009 I was also on a presidential commission on space flight, this time with president Obama, and I was a very strong advocate of the next step of exploration for the moon and Mars as a joint project for the United States and Russia. But the current political environment is making it a difficult one to decide on right now. I’m relatively confident that once there will be an improvement in the relationship between the United States and Russia, this would be possible.

To conclude, this event really was the most important event of my professional life. It is the reason why I had some preparation of how to become the founding president of Skoltech – because of it I have studied Russian, came to the Soviet Union and Russia a couple of times, had friends here, and worked in the space industry”.