The Moon Village – a permanent lunar base station – should be a truly international affair, and Russian villagers are more than welcome, European Space Agency head Johann-Dietrich Woerner told Skoltech professors and students on Friday during a Skype lecture devoted to his lunar dream. 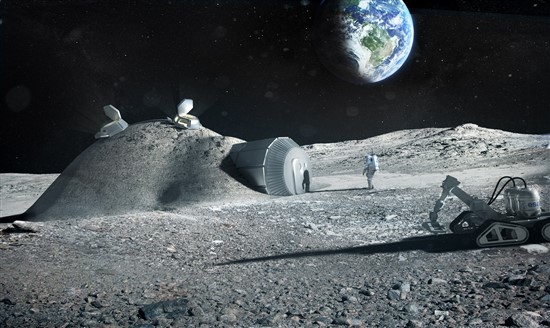 Radiation shelters for residents of the Moon Village are planned to be made from lunar resources. Photo: ESA.

The Moon Village is still very much a concept rather than a project at this stage, Woerner stressed, but nonetheless, the vision of the project is not without details.

The best location for the Moon Village is on the natural satellite’s South Pole, as there is water there and areas of permanent light, and the village structures will have to be made from the resources available on the moon, he said, speaking from Germany.

“The radiation there is very strong, so we will need to build structures, and they should not be sent from Earth. We should build them there using the materials available and 3D printing, producing radiation shelters for the astronauts. We cannot take all the stuff there – that’s in the past. We need to use the materials and resources that are there,” he emphasised.

The mission to the moon should combine human and robotic work, have multiple missions and purposes, and it should be a springboard for future deep space travel, said Woerner, a German civil engineer who has headed the agency since July 2015.

“Moon science is underdeveloped,” he said, adding that lunar tourism and commercial mining would also be possibilities offered by the Moon Village.

While in recent months, missions to Mars – both real and imaginary – have been the focus of attention, the Moon Village would be a crucial first step toward making manned missions to Mars a reality, Woerner said.

“We are on our way to Mars right now with Russia, to look for life there,” he said, referring to ExoMars, a joint mission between the ESA and Roscosmos, Russia’s state space corporation, which launched an orbiter and lander from Baikonur on March 14 to collect data on the Martian atmosphere. “But it will take seven months to get there, and to come back, the whole journey is about two years,” he said.

“That’s OK for a robot, but think about humans: If someone becomes ill on their way to Mars, there’s no way to come home earlier. To go to the moon and back takes one week. We need to start with the moon, not go directly to Mars.

“America is planning its journey to Mars, but they know they can’t get there for 20-30 years. The Moon Village is the perfect stepping stone,” he said.

This week, Roscosmos said it planned to build its own research center on the moon by 2035, and said a location had already been chosen on the edge of a crater.

Lin Industrial, a private Russian space startup and resident company of the Skolkovo’s space cluster, said last year that it could build a lunar base for 550 million rubles ($8.2 million) – also at the moon’s South Pole. 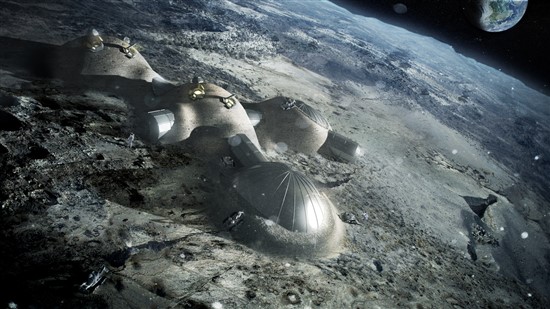 The Moon Village structures will be made using 3D-printing technology, the ESA head expects. Photo: ESA.

But Woerner is adamant that the most important thing is that different countries should work together on one unified project.

“No one should do it alone: it should be a joint project – that’s why it’s a village,” he said.

“This is what space can do,” he said, showing a photo of German astronaut Alexander Gerst, Russian cosmonaut Maxim Surayev and U.S. astronaut Gregory Wiseman waiting to take off for the International Space Station in May 2014, even as relations between the countries had plummeted at the height of the Crimean crisis.

“Even in times of crisis, we try to bridge the crisis,” said Woerner.

“Yesterday, we had the Space Race between the Soviet Union and the U.S. to get to the moon. We know the story: it was not focused on content, but on prestige. Today we’re in a totally different world,” he said.

His call for international cooperation was echoed by the representative of the ESA in Moscow, Rene Pischel, who was present in the lecture theater at Skoltech.

There are two main fields of cooperation between Russia and ESA: joint experiments on the ISS, and the ExoMars mission that recently launched from Baikonur, he said, adding that cooperation in space was strong despite international political tensions on Earth.

“Everybody is really trying to keep space out of the political equation. One reason is that space, as we have heard, is a bridge that we should use even during critical situations. The other is that space programs are very long-term, so if we always reacted to short-term political crises or difficulties, we wouldn’t get anywhere,” said Pischel.

The ESA is made up of 22 member states plus Canada.

The lecture was organised by Skoltech’s Space Center as part of Professor Rupert Gerzer’s course on Human Spaceflight.