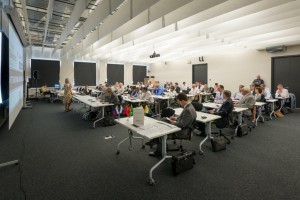 The first BRICS Conference on Photonics was opened today at Skoltech. The conference is organized in line with the Moscow Declaration and Action Plan adopted at the III BRICS Science, Technology and Innovation Ministerial Meeting on the 28th of October 2015. The new initiative on cooperation on Photonics was included with India and Russia as coordinating countries. The conference is attended by representatives of academic institutions, industry and coordinating organizations of BRICS participating countries: Russia, Brazil, India and China.

The aim of the conference is to identify the priority areas in the field of photonics which are of common interest to the BRICS member countries, as well as coordination of actions aligned with the existing competences, financial, scientific and technological resources of the participants. Another important task of the conference is to promote the establishment of partnerships between academic institutions, industries and other innovation companies of the BRICS member countries, interested in and actively involved in implementing joint industry-oriented projects. 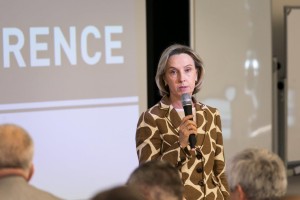 Lyudmila Ogorodova, Deputy Minister of Education and Science of the Russian Federation.

Chairman of the Organizing Committee Lyudmila Ogorodova, Deputy Minister of Education and Science of the Russian Federation, talked at the opening of the forum and pointed out that for modern Russia photonics and quantum technologies are very “vivid” and up to date part of the science: “Technologies that are emerging in these areas are cross-cutting and uniting many industries and sectors of the economy – information technology, communications, aerospace, life sciences, energy, lighting, and many others. Achievements in the field of photonics will determine how competitive a country or a group of countries will be in those technologies and those areas of the economy. Today in Russia 850 different scientific and educational organizations operate in the field of photonics, and scientists working there are well aware that photonics is not only research and development but also a rapidly growing business. Photonics market today is estimated at about 400 billion euros. In Russia, where photonics is included in a list of priority areas of research and development, a state support measures are implemented. The Russian government approved in 2013 a road map for development of photonics. The program is designed to provide a full cycle of serial production – from exploratory research to industrial production of photonic devices. A number of measures are already implemented in this program by the Ministry of Education. Four engineering centers were created at leading Russian universities, with more than 20 unique scientific facilities supported by the state in the shared centers”.

According to Artur V. Gleim, managing the Laboratory of Quantum Informatics International Institute of Photonics and optoinformatics ITMO – “The conference is a good platform for communication between representatives of science, industry, government agencies, and as a place to bring together the efforts of Russian scientists, scientists from the BRICS countries and all global cooperation in solving complex problems in the field of photonics. Scientists’ work in photonics research in various countries can lead to significant breakthroughs, but they need to capture and concentrate in superior locations, points of growth of new technologies. In my opinion, the BRICS conference area is ideal from the point of view of the formation of new markets, new standards of modern industry, connection of competence of scientists from different countries and organizations for their cooperation.
This event takes place as a forum of scientists of member countries of BRICS, it is not a “block”. It is rather a tool for interaction and the formation of market position. We are not in any way separated from the world community. Scientific communication and joint projects going on and off the BRICS, and Russia participates in this communication. For example, our University and the company “Quantum Communications” are involved in a joint project by teaching students from the United States on our technologies and systems. All our activities are in close contact with our foreign counterparts. This is very important in the promotion of methods and approaches developed in Russia. But they should be integrated into the world market – no one is interested in a “leg of the chair”, but there is demand for “the whole chair””. 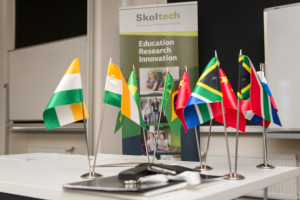 Dr. Pavel Mamyshev (IPG Photonics, the United States / Russian Federation), who spoke at the conference about ” State-of the-art in optical communications”, says that conference like this can help finally solve the old problem of the Soviet fundamental science – the gap between it, applied research and industry. “With undeniable achievements of basic science, the process of implementing its achievements have always been a weak point. I hope that now in Russia there is a new generation of scientists on one hand, and on the other – people who understand how to implement advances in real products.
The key problem of photonics now is the creation of integrated devices. In the USA and Japan they work for many years on the development of photonic integrated circuits. Without integration, photonic devices cannot be commercially produced. One of the main problems – the CPU communication with the memory. If we are talking about supercomputers, it is already clear that electronics capabilities are not enough here – optics are needed, but they should be compact, integrated, and cheap. But now photonics shows the individual components and by analogy with the electronics we’re somewhere in the period when there were only a few transistors.
The conference for me, as an American scientist, but a citizen of Russia, is very interesting as an opportunity to understand the status of Russian studies in my area – fiber optics, and help features. While the isolation is impossible and science has always been global, it is now very important for Russia to be technologically independent. This, among other things, means and have an internal program on photonics and have its own key technologies to ensure that at some time the country simply does not “turn off””.

According to Prof. Petr G. Kazansky (University of Southampton, United Kingdom), who gave a lecture titled “Seemingly unlimited lifetime optical data storage in glass”, the first BRICS conference on photonics is a great event: “to move forward in the field of science, and especially in photonics, without cooperation is impossible – There is large number of purely scientific problems that are almost unsolvable without international scientific cooperation. For the BRICS countries as third world countries, the organization of such co-operation between researchers, industry and government agencies, is one way to avoid being completely dependent on the transfer of technology and know-how from developed countries, the dangers of which correctly noted Dr. Narayanan K. Gopalakrishnan in his speech”. 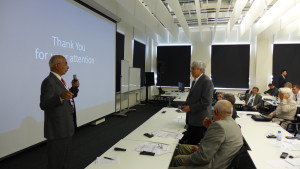 And indeed, Dr. Narayanan K. Gopalakrishnan (EE Photonics, India) says that “BRICS nations could not have chosen a better topic than photonics to begin collaboration with. Because it’s a technology which has already become mature in terms of markets and applications, and it’s of great interest to both businesses and to governments. So I think it’s a very good choice and I hope this first conference will define the problems and the various potential interests so that there will be a quick follow-up in terms of actually taking big projects”.
Dr. Gopalakrishnan described the overview report prepared in Russia as a very important document: “I’m heartened to see the enormous work that has already been done in Russia. I hope this document will get circulated amongst the other BRICS countries”.

The importance of the conference as a place to establish contacts was illustrated by another representative from India, Prof. Achanta Venu Gopal from the Tata Institute of Fundamental Research, who told us that it was at this conference at Skoltech, Russia, that he met with an Indian company, whom he didn’t know when he was in India. Now both sides are interested in cooperation.

Dr. Julio Cesar R.F.de Oliviera (BrPhotonics, Brazil) says “In our day-to-day work we are pushed by USA and Europe, and we have a good opportunity to connect with countries that have good potential, but are not so developed in the sense that they have the full manufacture developed industry. It’s very good to try to identify how to shortcut and even better than this, how to share the information, to try and to connect and to solve some problems – that today we solve completely alone in our countries – in a partnership”.
Dr. de Oliviera shared his impression from Russia, and specifically from Skoltech: “I’m very surprised about how big is this ecosystem, with a lot of people. In Brazil we have a smaller ecosystem. I’m very surprised with the environment here, trying to promote entrepreneurship and to go to the industry, because in Brazil the market conditions are not so easy for the people who would like to do that, but we are trying to do what you do here in Skoltech and in Skolkovo. I think Russia is in the right direction”.

The conference will continue tomorrow with sessions regarding “Integrated Optics”; “Biophotonics” and “Navigation & location systems”. There will also be a poster session and exhibition.