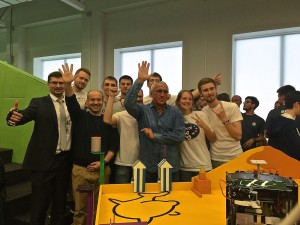 What a robotic weekend this was. It started with the Skolkovo Robotics conference on Friday, and ended with a grand crescendo of a convincing win by Skoltech’s Eurobot team in the national final stage of the Eurobot Russia competition. Skoltech’s team will participate in the international final, which will take place on the 11 to 12 June 2016, in Kremlin-Bicêtre, France.

After convincingly winning through the preliminary rounds, the team reached the final, where they met with the Russian team “Terabyte”, and a great team, “miu” from the University of Novi Sad (Serbia), which acted outside of the general results of the competition. Eventually, no team could match the skills and abilities of Skoltech reSET team, and they were announced as winners of the Russian stage of Eurobot 2016. The second place went to the “Terabyte” team, and the third place was taken by DRM Robotics. This means that on 12 June reSET will represent Skoltech and Russia at the international final of Eurobot 2016 in Paris. 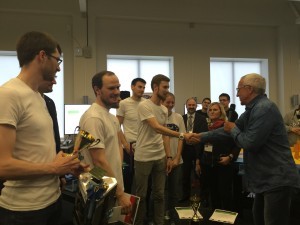 Before the final, Academician Alexander Kuleshov, Skoltech President wished success to all the teams, but did not hide that he would support reSET: “I do not believe in the validity of the expression “the main thing is not to win but to take part”. I like seeing that all teams here gathered in order to win. This is a great quality, which is nice to see in young people. I wish good luck to all the teams, but I want to see Skoltech team’s victory!”.

Prof. Dzmitry Tsetserukou noted that the current competition features a high level of command: “Our team compete with worthy opponents from Ekaterinburg, from Kuban State University, but most of all I was surprised by the level of the Serbian team from the University of Novi Sad. It says one thing – we in Russia must greatly improve the level and quality of robotics. Today’s participants of Eurobot is tomorrow’s technical elite, which will create the country’s economy. I am proud and happy for the guys. They, along with the instructor Alexei Gonnochenko done a fine job. In six months, from scratch they created an incredible team capable of winning by a large margin from the competitors and representing Russia at the international level”.
In an email he sent to the team after the victory he wrote: “You are the champions! Breath the spirit of the winners and remember it for all of your life. What you have done is amazing and unbelievable, you have not only won all  rounds but have beaten the human team. Your hard work is the example for all students of my Lab and Skoltech! Your efforts greatly lifted up the Skoltech recognition in Russia. My warm and deep regard to your work! Special thanks to Alexei Gonnochenko for the smart and productive leadership. Very proud of all of you! Please take a rest”. 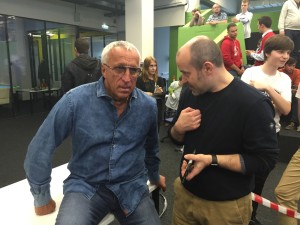 Albert Efimov, Head of “Skolkovo” Robotics Center, commented on the results of the Eurobot 2016: “Speaking of winners, I would like to mention their concentration on winning and durability. Because the strength of Skoltech is not only the support of the “Skolkovo” and all the Skolkovo ecosystem, but it is the ability of individual participants to focus and develop a strategy that led to victory. And, of course, it is impossible not to note mentoring Alexei Gonnochenko perfectly cope with the task. ”

“Our chances to be in the Top 5 in Europe is quite real,” – said Skoltech team mentor Alexei Gonnochenko.

Congratulations to the team reSET Skolkovo Tech with a victory and good luck on the European stage Eurobot 2016!