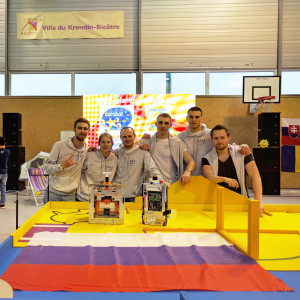 After winning the Russian national title, participating the international final in Paris and reaching the top-16 stage, Skoltech’s Eurobot team – reSET – lost to the Swiss team A.R.E.S at the 1/8 final. “This final loss was like a win”, said reSET’s team leader, head of Skoltech’s robotics lab, Prof. Dzmitry Tsetserukou.

This year the Eurobot’s competition theme was “The Beach bots”. The participating robots had to complete theme related tasks – fishing, build sandcastles, and collect shells – within 90 seconds and earn as many points as possible. The finals took place in Paris, France. Among the participants there were teams from France, Belgium, Switzerland, Serbia, Romania, Hungary, the UK, Germany, Poland, Spain, Canada, Tunisia and of course the Russian federation. Each country could send more than one team.

On the first day of the competition, reSET got a nice 105-71 win over team TURAG from Germany on the second round. On the third round reSET lost to the Swiss team RCR 65-61, and got the 14th general place.

On the first round of the second day reSET lost to the French team ESEO – Angres 65 – 61, but had a wonderful 157-109 the next match, over the Swiss (again) team RI7. After the preliminary stages it turned out that the Skoltech team is between the top 16, which according to prof. Tsetserukou “It is the first time when new team comes to this stage”. 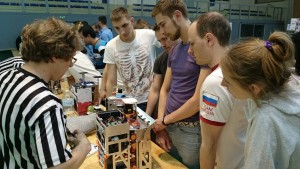 At the 1/8 final reSET met yet another Swiss team, this time it was team A.R.E.S, but lost 89-111. Prof. Tsetserukou describes what happened in the match: “The Swiss team blocked our robot, but our robot overpassed it with clever strategy. Unfortunately it could not bring sand-cubes to the designated area, but all the audience applauded us. We had a very clever robot and the most advanced”.

Oleg Shipitko stated on behalf of the reSET team: “We are quite happy, but we know that we could do better. We were quite unlucky on our way because in the randomly assigned pairs in qualification phase we didn’t have any easy opponents. Nevertheless we managed to get to the final and made our opponents very nervous there. We learned so many lessons about this competition and we will be much better prepared next year.
Also, we enjoyed sharing experience with other teams. It was a real pleasure for us that many teams with big experience were shocked by the level of technologies we used in our robots. In addition, we received many questions about Skoltech and how to apply to it. So, we expect to see familiar faces among next year’s students.
So, we are happy about the result but we are going to make it better.”

The final rank of reSET team was 13. We applaud the team, who is still the Russian champion, for the work they did and for their achievements. We also want to thank the team’s co-organizers – Skolkovo RoboCenter – and our sponsors: Phoenix Contact, Maxon motor, Rock flow dynamics and Aviton. We are looking forward to see next year’s Eurobot team at Skoltech. The theme is already known – Moon village.