At the end of July, the delegation of the Skolkovo Institute of Science and Technology (Skoltech) headed by a member of the Russian Academy of Sciences, rector Alexander Kuleshov, visited the Central AeroHydrodynamic Institute named after professor N.E. Zhukovsky (part of the National Research Center ‘Institute named after N.E.Zhukovsky‘). 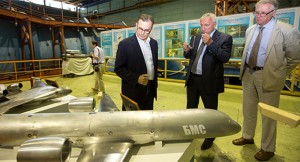 The visit was organized to become familiar with the experimental facilities of the Russian aviation science center and discuss areas of cooperation. Specifically, TsAGI’s software was considered as a potential element in the development of aircraft equipment. Among them is EWT-TsAGI — the Electronic Wind Tunnel — which is intended to conduct computational aerodynamics tests. The conversation was also focused on enhancement of high-lift system and cruise aircraft arrangement, design of aircraft preliminary configuration, etc.

One of the Institute’s principal systems for wind-tunnel tests — the transonic wind tunnel — was demonstrated to Skoltech representatives. The delegation attended the sites intended for research of aircraft strength issues — the static and endurance test rooms.

The Central Aerohydrodynamic Institute named after N.E. Zhukovsky (TsAGI) was founded on December 1, 1918 under the initiative and leadership of N.E. Zhukovsky, the father of Russian Aviation. Today TsAGI is the largest scientific research center in the world. Under the Russian Federation Government Decree No.247 of March 29, 1994 TsAGI was designated a State Research Center.