“We have a big year in front of us!” said Skoltech Dean of Education Clément Fortin to the crowed of enthusiastic students, who gathered at the cohort space for the opening of Skoltech’s 5th academic year ceremony. Whereas the first ceremony was historic in Skoltech terms, the fifth time is natural, almost a routine. 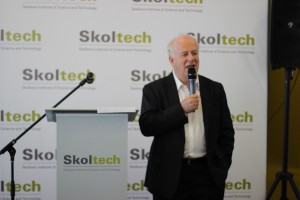 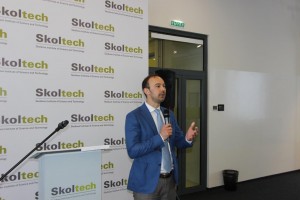 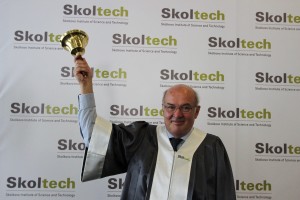 155 new postgrads, the biggest number to date, came to celebrate ‘Knowledge Day’ – or День Знаний in Russian – a little bit earlier than usual (which is September 1st). The reason for this is the intense and compressed studies that awaits the new students at Skoltech.

After Fortin’s short welcoming speech, it was the turn of Alexander Safonov, Vice President for Academic Relations, to talk to the students. “This is the first time for me too”, he told them, “You have enough courage coming here, and you will have to work harder, so good luck!”. His speech was followed by the encouraging words of their fellow student, Andrey Rykov: “At Skoltech everything is possible. Don’t be afraid of anything, never give up”.

At last, the moment that named the whole event came, as Prof. Gerzer came to the stage, and rang the bell to mark the official opening of the academic year. The ceremony was over, and it was time to go and study.

Not long afterwards, the new students had their first encounter with the Skoltech trademark – innovation workshop. They got an overview of the intensive weeks that awaits them, or as Ilia Dubinsky, Director of the Center for Entrepreneurship and Innovation, put it “we are going to squeeze for you four MIT courses into one month”.

We wish all our students, freshman and sophomore, an energetic, fruitful and innovative year!