Data Science Game (DSG) is an association that promotes the development of data science and skills related to scientific challenges addressed to students in computer science, data science, engineering, statistics and/or applied mathematics. The association holds an annual competition in the field of Data Science, and this year, the Skoltech team won the third place in the final, which was held in Paris, France. 20 teams made it to the final, among them three Russian teams. All of which won prizes. 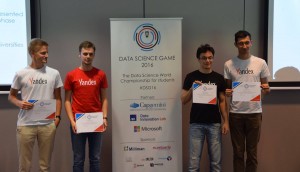 According to the competition’s rules, there can only be two PhD students in each team, and the other two must be either bachelor or master students. The members of the Skoltech team were master students Andrey Rykov and Aleksandr Anikin, PhD student Dmitry Ulyanov, all of them are IT students, supervised by Prof. Victor Lempitsky. Another member of the team is Ulyanov’s friend, MSU PhD student Dmitry Altukhov. The team has won one title even before the competition had started – the longest name.

We asked Andrey Rykov from team “We just want our name to be the longest one” to tell us about the experience and the success:

“The DSG competition consists of two phases: an online phase, which we solve at home, and then the top 20 teams go to Paris and are given one problem, which they have to solve during the weekend. We were given with some metrics and the team with the lowest metrics won”.

Q: How did you solve the problem?

A: “We had to create some features from the data. It often occurs in data science problems: we are given some kind of information, and we have to engineer other information out of it, we need to think how to combine the given features in order to have new ones. In this competition, this was the core in the solution: if the team managed to create good new features, it was in the top, and if it failed, then…” 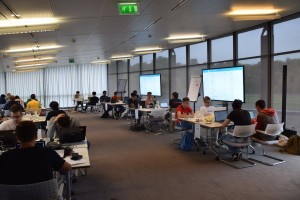 Team “We just want our name to be the longest one” (on the right) during the DSG16 final stage.

Q: How did you divide the work among the four of you?

A: “First, all of us explored the data separately. Afterward we had a brainstorming, discussing our ideas, our findings, what we have noticed etc. Then our team leader, who already had some code snippets, and he was the first to create some kind of baseline solution. Then we just improved this solution step-by-step and added more improvements. During the process, we tried different ways to solve the problem, but they were not very good, so we came back to improving the original solution, which occurred to be the best.”

Q: How did it feel to get the third place?

A: “On one hand, we were very happy, and on the other hand, it was inspiring. We became sure that we could solve quite difficult problems and get good results. Two of us are master students and it was the first competition we had, with such high level of participants. The other two team members are experienced already, they are both PhD students and Dmitry Altukhov is ranked 8th on the Kaggle platform.”

Q: how did you feel about another Russian team, from MIPT, winning the competition?

A: “One of the organizers of the competition had a joke in the opening ceremony, paraphrasing the football-related saying, that football is played for 90 minutes and at the end the Germans win. He said that the Data Science Game is a funny game, and at the end, the Russians win. That is because last year a Russian team won as well. I think we are all very proud to prove that joke. It is worth mentioning that the third Russian team, from Moscow State University, also won a prize for the most innovative solution.
In the final stage there is a restriction – only three teams from each country can participate. Happily, all three Russian teams took prizes. I think it is a great result for our country.”

Q: what is your team’s connection with Yandex*?

A: “Dmitry Ulyanov works in Yandex as a researcher parallel to his PhD studies at Skoltech. We needed some sponsorship to get to Paris and Dmitry managed to convince Yandex to sponsor us. The funny thing is that the MSU team was sponsored by Mail.ru, so we had a small sponsor-competition.”

Professor Lempitsky’s response for the students’ achievement: “I congratulate the team with their achievement, which, I must confess, was a big and positive surprise to me. Dmitry, Andrey, and Aleksandr are fully engaged into their research and innovation projects with our (Computer Vision) group, and all three of them are doing great job. I would imagine this would leave little time to train for data science competitions, and yet they have done remarkably well! Congratulations, guys!”