On February 27, 2017, on the sidelines of the Russian Investment Forum in Sochi, Skolkovo Institute of Science and Technology (Skoltech), Moscow School of Management SKOLKOVO and the New Economic School (NES) announced an official beginning of their cooperation. President of Skoltech, RAS Academician Dr. Alexander Kuleshov, President of the Moscow School of Management SKOLKOVO Andrei Sharonov and Rector of NES Shlomo Weber signed an agreement on the establishment of the Skolkovo Education Hub. Russian Deputy Prime Minister Arkady Dvorkovich was in attendance. 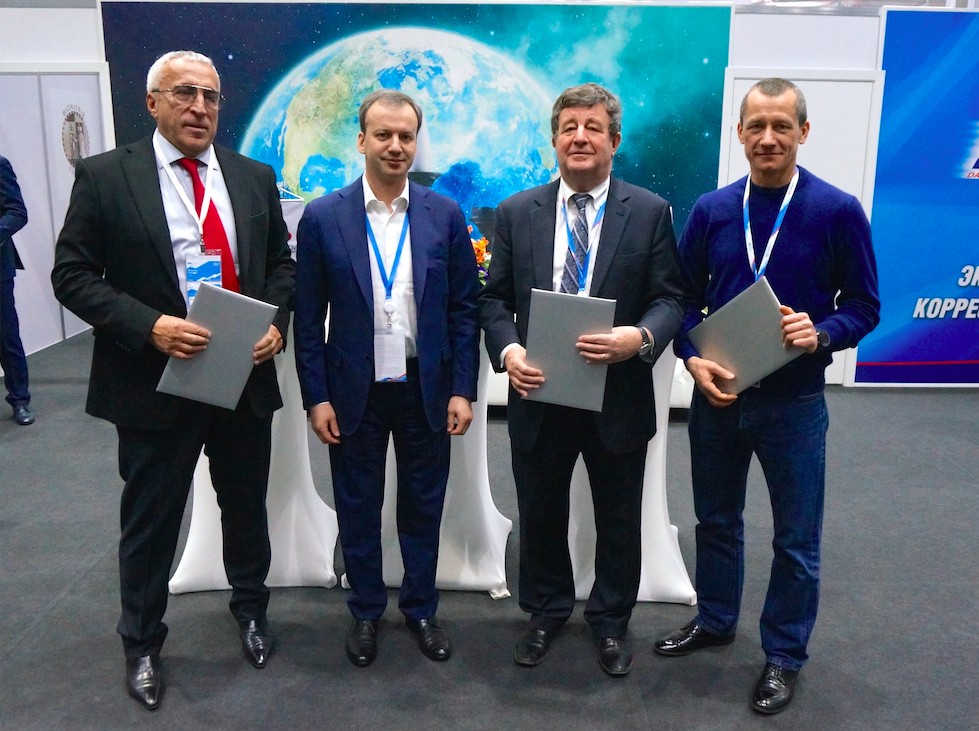 The three leading Skolkovo educational institutions have mapped out a plan for academic cooperation envisaging the development of joint educational programs and implementation of joint research projects. These educational products will aid academic activities of partner universities and enhance corporate training offered by the leading Russian industrial enterprises.

The parties place special emphasis on the joint development of infrastructure, networking and developing a single academic community for students, professors and alumni. The Skolkovo Education Hub is planning to incorporate e-learning and distance education technologies in its new programs. Leading Russian and foreign professors will be engaged in the Hub’s activities. A dedicated Coordination Council will be established with an objective to oversee the Hub’s operation.

Alexander Kuleshov, President of Skoltech, “In my opinion, today Russia is in great need of highly qualified professionals, who not only demonstrate solid knowledge in their field of expertise, but also have a profound understanding of domestic and international business processes. There are no doubts that any established physicist, engineer or biologist facing the need of managing a team of subordinates or dreaming of the establishment of an enterprise is capable of learning the basics of management and economics (as the saying goes, “It is not rocket science. Where there is a will, there is a way.”). The approach “let’s try and see”, however, has been the plague of Russia’s sustainable technological development, as it often ruined great ideas, destroyed big dreams and successful careers and sometimes chased the investors away. What would be the conclusion? We should join our forces!”

Andrei Sharonov, President of the Moscow School of Management SKOLKOVO, “Global experience clearly demonstrates that businesses prosper only if they are established based on new technologies, the entrepreneurial approach and solid understanding of global macroeconomic processes. And we see it as the core objective of cooperation of our three schools. We expect that within just a few years the synergies between the educational institutions and competencies will produce a tangible effect. Our goal is to create an educational environment fostering a practical application of knowledge and research, which, in the end, would give impetus to the development of the country’s scientific and entrepreneurial ecosystem.

Shlomo Weber, Rector of NES, “Nowadays education goes beyond just a mere trade training. And the New Economic School ensures that its students not only gain fundamental knowledge in Economics and Finance, but also learn critical thinking—a combination of skills that makes a world-class specialist, allows to make a positive contribution to the development of the national economy. A wide range of educational programs offered by NES and our colleagues from the Moscow School of Management SKOLKOVO and Skoltech creates a solid base for the development of brand new, in-demand specialty skillsets empowering graduates with cutting-edge knowledge from the fields of economy, technology and management.

*The Skolkovo Institute of Science and Technology (Skoltech) is a private graduate research university. Established in 2011 in collaboration with the Massachusetts Institute of Technology (MIT), Skoltech educates global leaders in innovation, advance scientific knowledge, and fosters new technologies to address critical issues facing Russia and the world. Skoltech conducts it work integrating the best practices of the best Russian and international educational and scientific research universities. Moreover, the university pays particular attention to entrepreneurship and innovative education. Website: https://www.skoltech.ru/

* Founded in 2006 at the initiative of the business community, the Moscow School of Management SKOLKOVO is one of the leading private business schools in Russia and the CIS. The Moscow School of Management SKOLKOVO offers a range of programs dedicated to the development of business across all stages of it growth—from a startup to a mature large corporation with international branches. All programs are built on the “learning by doing” concept and comprise theoretical modules, “hands-on” exercises, projects and international modules. www.skolkovo.ru

* Founded in 1992, the New Economic School (NES) is a private and unique education and research facility. Its mission is to provide and promote knowledge in the field of modern Economics and Finance, and to carry out advanced research for the benefit of the Russian society, its private and public sectors. The majority NES’s faculty hold PhD in Economics and Finance from the leading univarsities in the world. NES boasts an outsanding student and graduate community. Degrees earned at NES are highly valued in Russia and abroad. NES’s graduates work for reputable Russian and international companies and enroll in MBA and PhD programs at leading universities across the globe. NES is engaged in research and educational activities, corporate training, development of educational programs in the field of Economics both in Russia and in the countries of the CIS. www.nes.ru

Press secretary of the SKOLKOVO Moscow School of Management