The Skoltech scientists worked alongside their colleagues from the Russian Academy of Science’s Institute for Problems of Chemical Physics, Moscow State University and the Catholic University of Leuven’s Rega Institute for Medical Research (Belgium) to explore the reactions of chlorofullerene C60Cl6 with alcohols and hydroxy acids. Their experiments have shown that – depending on the reaction conditions – a few novel families of compounds can be prepared with high selectivity. The first water-soluble compound synthesized using these reactions demonstrated potent anti-HIV activity. Researchers anticipate that further exploration of the designed variety of fullerene derivatives may result in the development of important lead compounds that demonstrate high inhibition efficiencies against several viruses, including: HIV, influenza, herpes simplex virus and cytomegalovirus.

Fullerenes are carbon allotrope composed of cage-like molecules. They are considered to be molecular forms of carbon. The most abundant fullerene molecule consists of 60 carbon atoms. It closely resembles a soccer ball, with its 12 pentagonal and 20 hexagonal facets. Although the chemistry of fullerene C60 has been well explored, the methods allowing for the selective functionalization of certain multiple positions on the fullerene core are still under development. Fullerene molecules are highly hydrophobic and their solubilization in polar solvents and water requires the attachment of several (at least four) ionic functional groups to the carbon cage. It is difficult to carry out this type of functionalization efficiently using standard reactions by employing additions of reagents across a single C=C double bond on the carbon cage. However, this challenge can be successfully addressed using halogenated fullerenes as precursors. For instance, C60Cl6 is a thermodynamically stable chloride and can be obtained from parent C60 in minutes with a quantitative yield. Replacing chlorine atoms with different functional groups allows for the facile preparation of a wide variety of fullerene derivatives with tailored properties, including water-soluble compounds.

Pavel Troshin, one of the study’s authors and an associate professor at the Skoltech Center for Electrochemical Energy Storage said: “We have been systematically exploring the chemistry of C60Cl6 and we developed efficient pathways for the facile preparation of compounds with the C-C, C-S, C-N and C-P linkages between the organic addends and the carbon cage. Water soluble compounds of these series demonstrated diverse biological activities (antiviral, antitumor and neuroprotective properties), which were very dependent on the type of the linkage.  Such behavior inspired us to design a novel family of fullerene derivatives with C-O linkages and explore their properties. While conducting this study, we discovered several new reactions that can convert C60Cl6 to a set of different products with a C-O type of bonding between the organic addends and the fullerene cage (Figure 1). The designed water-soluble compound of this family, which bears residues of 3‑hydroxypropanoic acid, has demonstrated potent antiviral activity against HIV, as revealed by our collaborators at the Rega Institute for Medical Research. These results open new dimensions for the rational design of efficient fullerene-based antiviral pharmaceuticals, with strong potential for commercialization in the future.” 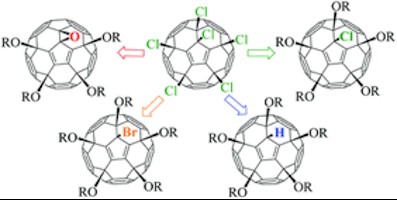 This study was published in the journal Organic and Biomolecular Chemistry, where it was featured on the cover of the issue.