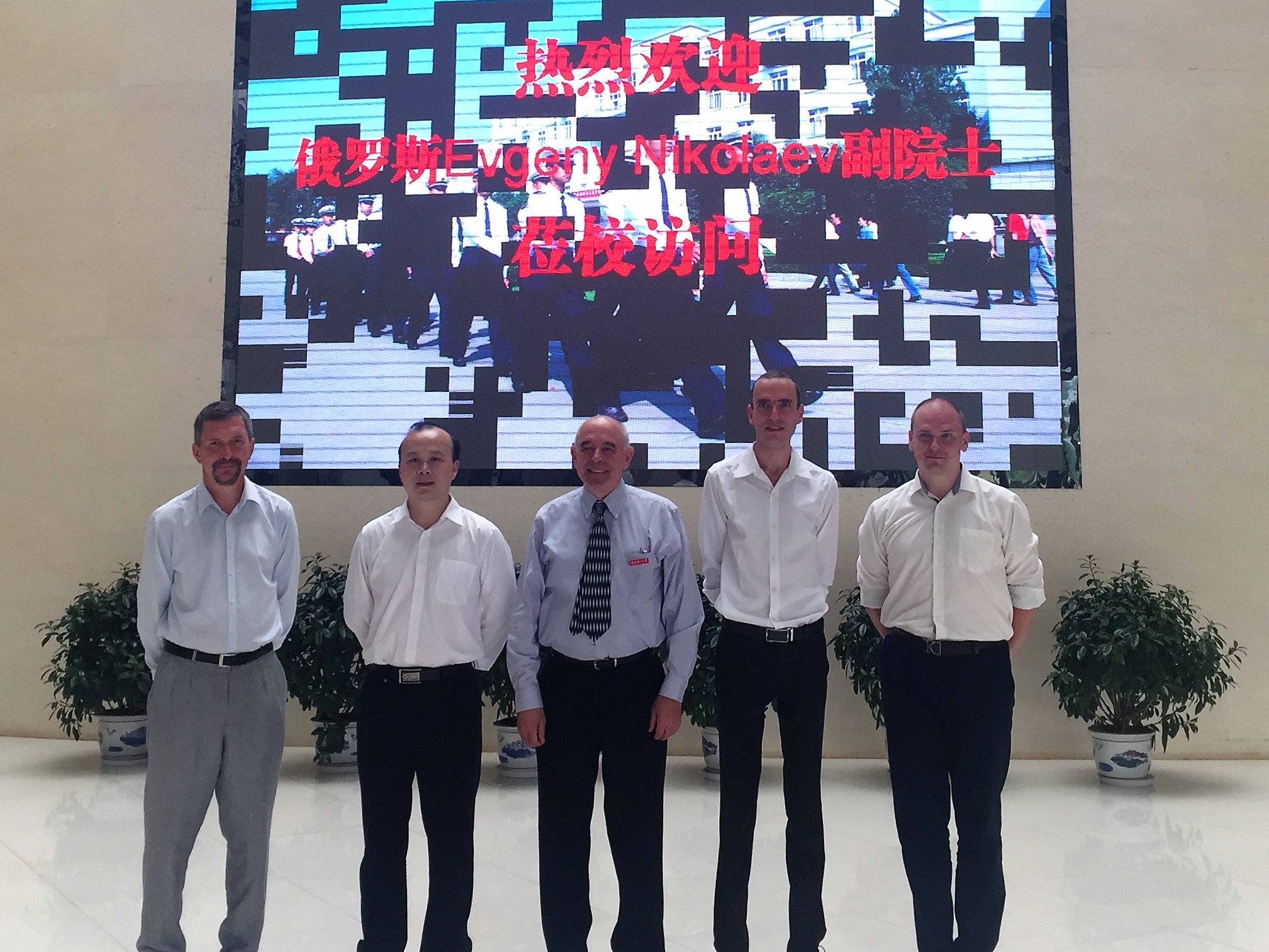 Skoltech Professor Evgeny Nikolaev, center, stands with colleagues under a screen honoring him at the East China University of Technology.

Dr. Evgeny Nikolaev, preeminent mass spectrometry expert and professor at the Skoltech Space Center, has been awarded an honorary professorship by the East China University of Technology (ECUT).

“It looks like ECUT is very much interested in what we are doing here and wants to transfer our [mass spectrometry] technology to their university,” Nikolaev said. “In November, I organized an international conference here and they were in attendance. They were impressed with the conference and invited me in response.”

Mass spectrometry is a method that can be used to measure the masses of particles and molecules, and identify the contents and chemical structures of molecules. This technology has far reaching implications for biomedical research and the practice of medicine.

Prior to joining Skoltech, Nikolaev was based at the Russian Academy of Sciences, where he continues to run three labs. In this capacity, he teamed up with medical centers to use mass spectrometry to save extremely vulnerable lives.

“In one of these labs, we were monitoring the health of prematurely born babies,” he said, noting that the babies would often come into the facility weighing little more than half a kilo. “It’s difficult to monitor their health, and using mass spectrometry, we invented a method of monitoring their health through breath and urine – non-invasive diagnostics.”

“[ECUT] is interested in this technology,” Nikolaev added. “Because it’s quite a new idea of how to monitor the health of these babies.”

“Using the mass spectrometer, it is possible to identify in new born kids more than 40 illnesses that are caused genetically,” he said, referring to the apparatus used in the practice of mass spectrometry.

He referred also to preeclampsia – a condition marked by high blood pressure in pregnant women that can be fatal. “It’s a dangerous sickness, and using a mass spectrometer, we can detect it about two weeks before physiological changes occur. And that’s important for gynecologists,” Nikolaev said, noting that two weeks can mean the difference between life and death for afflicted women.

Skoltech has two mass spectrometers in its labs, which the professor noted are to be used for medical purposes. Five more of these apparatuses are expected to arrive at Skoltech this year.

At the time he was invited to receive the ECUT award, Nikolaev had been in China to deliver a keynote lecture on recent developments in the field of mass spectrometry at the International Congress on Analytical Sciences in Hainan.

Over the course of Nikolaev’s illustrious career, he has published some 300 academic papers, obtained 51 patents and delivered more than 200 conference presentations.