In recognition of a lifetime of advancing scientific frontiers, the American Space Medicine Association (ASMA) has selected Skoltech Provost and Acting Director of the Center for Translational Biomedicine, Professor Rupert Gerzer, as the winner of a prestigious annual award.

The Jeffrey P. Sutton Scientific Achievement Award “recognizes an accomplished individual or team for distinguished scientific and/or technical achievements that advance the field of space medicine,” according to the ASMA website.

Gerzer’s professional career is replete with advances and innovations that have shaped the field of space medicine and have had a burgeoning impact on the practice of medicine on earth.

When asked what the award committee zeroed in on when selecting Gerzer as this year’s recipient, he explained that two key elements helped him stand out: a discovery his team made that altered our understanding of how salt can affect the human body, and his work as head of the world-renowned Institute of Aerospace Medicine (IAM) in Germany. 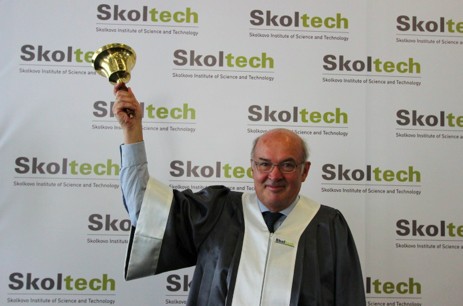 //Salt, one astronaut and a game-changing discovery

Asked which of his professional space medicine accomplishments he is most proud of, Gerzer pointed to his game-changing discovery of how the human body processes sodium and fluids.

Years ago, Gerzer’s team was running some routine tests when they found that one astronaut’s fluid and salt input and output were in disagreement – a phenomenon previously thought to be impossible.

“In the textbooks, you read that salt and water are always in parallel,” Gerzer said in a recent interview. “One astronaut stored salt, but not water during his stay in space, and this is basically not allowed.”

Rather than disregarding this as a one-off phenomenon, Gerzer wondered if this could also occur on earth.

He launched a study wherein healthy, young test subjects were fed high-sodium diets. Subsequent metabolic testing revealed that if a person eats a high-sodium diet, he or she – like the astronaut – will store sodium without storing fluid.

A colleague of Gerzer’s then performed the same experiment but with rats. After feeding them a high-sodium diet, the researcher sliced open the test subjects to determine where the sodium was stored. This study revealed that non-osmotic sodium was being stored in the skin of the rats.

The same molecular mechanism was then also identified in humans – a finding that gave rise to a flurry of medical innovations.

“By now it has turned out that the human skin is an important storage place and regulator for sodium, that sodium storage involves macrophages which in turn salt-dependently co-regulate blood pressure, that body sodium also strongly influences bone and protein metabolism, and that immune functions are also strongly influenced by sodium. In addition, the aging process appears to lead to increased body sodium storage, which in turn might influence the aging process of the human body,” Gerzer wrote in an published in the scientific journal Astra Astronautica.

“Altogether, we started a completely new field in medicine by originally only looking at one astronaut,” Gerzer said in a recorded acceptance speech that he sent to ASMA.

This discovery has opened the floodgates to a wealth of promising new medical findings. Subsequent research conducted on the issue has revealed that the finding could have considerable implications for several health struggles, including autoimmune diseases, kidney maladies and the aging process.

“I am very sure that this mechanism… will lead to the discovery of how some diseases work and also the [development] of new medications and new drugs that help humans,” Gerzer said.

Prior to joining Skoltech, Gerzer spent upwards of two decades serving as the director of the IAM in Germany, a research institution that focuses on issues related to aviation and space flight.

A key development that boosted IAM’s fame and fostered its relations with international space agencies during Gerzer’s tenure was the creation of the :envihab, a large facility that is able to replicate the atmosphere of the International Space Station (ISS), as well as those of lunar or planetary habitats. 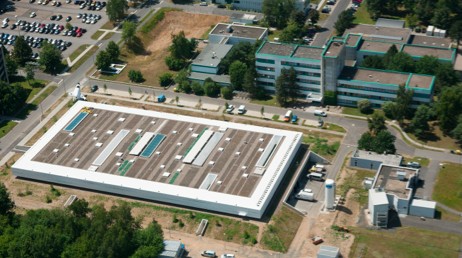 A bird’s eye view of the Institute of Aerospace Medicine in Cologne, Germany. The :envihab is the large building in the center, and the institute is seen in the top right corner.

“I succeeded in getting a major grant, so I used it to build a big new facility for space medical research,” Gerzer said.

“The whole world was doing studies on the ISS, but usually in good science when you do an investigation, you always have a basic control, because you want to know how things are changing,” he explained. “In the ISS, the pressure is not quite the same as on earth, and the carbon dioxide level is different than on earth, and we have a special psychological situation. Nobody was really doing the proper parallel studies on earth, and so when we found things in space, we never knew whether it was really the influence of weightlessness, or just psychology, or a different atmosphere, etc. So I built a facility for conducting parallel investigations, and also for preparing for planetary research, for planetary stations and for planetary flight.”

Shortly after constructing the facility, the IAM attracted the attention of the US space agency, the National Aeronautics and Space Administration (NASA).

Around that time, NASA discovered that male astronauts aged 45 and up were developing vision problems in space.

“There was no clue why this would happen,” Gerzer explained. “NASA looked into it, and it turned out the vision problems might have something to do with the atmosphere in the space station, and I had the only research station where it was possible to investigate humans in an atmosphere like on the space station.”

This was the first of many fruitful collaborations between IAM and NASA on this topic.

“When you train an astronaut, it’s usually for decades – and the training is extremely expensive,” Gerzer said. “So you want to select people who are happy in this profession, who will endure a lot of stress, who are able to work well in a group, and who do not decompensate if various complex problems arise because they want to survive when something happens on the space station and they have to repair it. So you have to really select the right persons. If you’re selecting and you’ve made your choice, and it turns out five years later that it was a mistake, it gets very expensive and places many lives at risk.”

Another crucial function the IAM performs is bed-rest studies. Gerzer explained that volunteers – many of whom include students who wish to contribute to European space exploration any way they can, or self-employed individuals who can perform their work from a confined space – will stay in bed for three months at a time. By observing these test subjects’ physiological processes, researchers are able to understand how astronauts adapt to conditions in space, and adjust training procedures accordingly.

After 23 years at the helm of the IAM, Gerzer reached the retirement age in Germany and decided to continue to work in academia. In 2015, he moved to Moscow, where he served initially as a Professor and Interim Director of the Skoltech Space Center. He became Provost in May 2016, and took on the additional role of Acting Director of Skoltech’s Center for Translational Biomedicine in March of this year.

Early in his career, as a clinical researcher with a medical degree, Gerzer was lured into the field of space medicine by his curiosity about physiological principles. In the years that have since passed, this curiosity – propelled by his entrepreneurial spirit – have cemented Gerzer’s status as a preeminent space medicine researcher, a fact made clear by his latest award.