At present, the World Health Organization ranks antibiotic resistance as among the greatest threats to global health.

With the help of two world-renowned experts and a small horde of genetically-modified mice, Skoltech MSc student Ksenia Ershova, MD, has spent much of the past year in California making advances in the fight against this threat.

“One of the main questions I had to address when I worked as a medical doctor was how to treat patients with severe nosocomial infections,” Ksenia said of her career prior to Skoltech.

A nosocomial infection is an infection acquired in a healthcare facility. Hospitals and clinics tend to contain high levels of antibiotics, thereby fostering the growth of resistant bacteria.

She pointed out that there is a certain irony at work here. “The more we use antibiotics, the more we improve the ability of bacteria to sustain them and to survive,” Ksenia said.

In the spring of 2016, Ksenia was invited to the University of Southern California (USC) to conduct research on nosocomial infections under the guidance of anesthesiologist Vladimir Zelman, MD, PHD, of Skoltech and USC and antibiotic resistance specialist Brad Spellberg, MD, of USC. 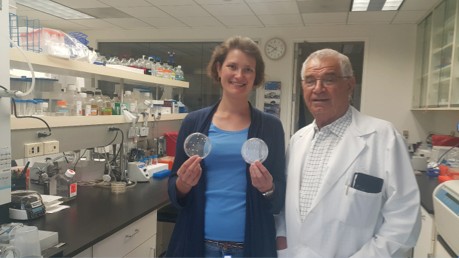 Ksenia and Professor Zelman in the Spellberg lab at USC

The results of her USC work have been eagerly received among international medical professionals.

“Nosocomial infections are a very big problem today,” Professor Zelman said in a recent interview. “The clinical idea, so to speak, is to try to find the possibility of reducing the number of infections contracted by patients during periods of hospitalization. And if they do arise – to find ways to successfully treat them.” 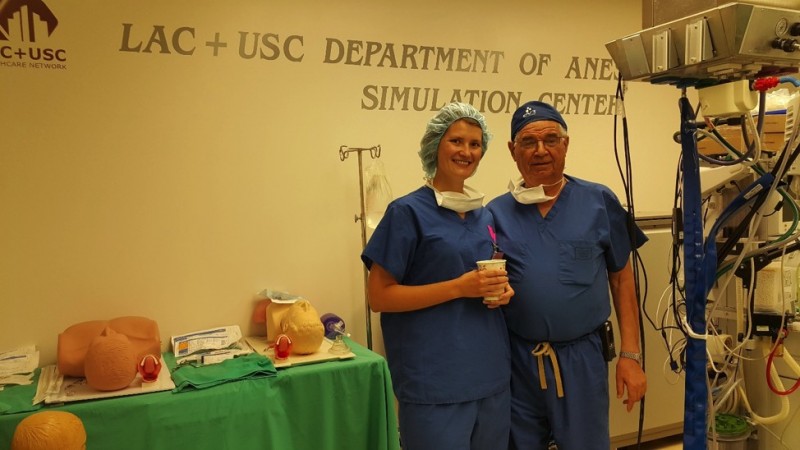 //California by way of Skoltech

As a medical student in Russia, Ksenia focused on anesthesiology and intensive care. Prior to attending Skoltech, she worked for an intensive care unit and as a medical expert for a pharmaceutical company.

“It was great to get some experience in clinical research and drug development,” she said of her time in the latter role. “I liked it very much… and wanted to improve my skills.”

This desire led her to Skoltech, and in turn to USC.

“Last Spring I discovered that Vladimir Zelman had a connection with Skoltech. And he’s an anesthesiologist, like me,” she said of the revered academic and practitioner, who serves as a professor at Skoltech’s Center for Data-Intensive Biomedicine and Biotechnology and as a clinical professor of anesthesiology at USC’s Keck School of Medicine, in addition to continuing to work with patients. After having studied medicine and started his career as a doctor in Russia, Zelman moved to the United States in 1976. His expertise is deeply respected in both countries.

“I was so excited about that,” she said. “I wrote to tell him that I’m an anesthesiologist and I would like to work together because he’s such a great scientist and he has this wonderful experience in US healthcare, and he replied and invited me to join his team.”

Ksenia was more than happy to take him up on the offer.

Professor Spellberg also proved to be a major source of inspiration during Ksenia’s time in California. In addition to serving as Chief Medical Officer of the Los Angeles County-USC Medical Center, Professor Spellberg teaches clinical medicine at USC’s Keck School of Medicine and works closely with the Infectious Diseases Society of America. “He’s one of the best specialists in antibiotic resistance and nosocomial infections in the United States,” she said. 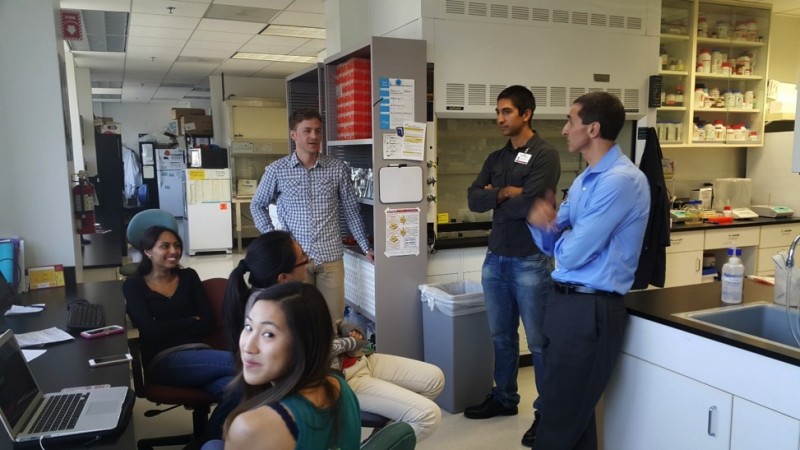 Researchers attend a meeting at the Spellberg Lab

//Mice on the front lines in the battle against antibiotic resistance

“The idea was to imitate the infectious disease in mice, and then to apply our new inventions to this disease to test their efficacy,” she said.

In conducting her tests, she combined human recombinant transferrin with one of two antibiotics – either Meropenem or Ciprofloxacin. Not an everyday word, a transferrin is a glycoprotein that binds with and transports iron in blood serum. By maintaining very low iron levels within organisms, it plays an important role in resistance to bacterial infections.

Working with her colleagues in the Spellberg lab, Ksenia found that the transferrin was able to decrease the emergence of resistance to antibiotics.

“Each and every experiment required so much effort, and as usual, 95% of all efforts went directly to the trash bin,” she explained.

But her persistence paid off.

“With the mouse experiments, I was so excited to see that we cured them, that we cured these little animals,” she said. “And they survived because of our treatments, and despite this deadly infection. And then we analyzed the processes in organs and blood and molecules, and looked at the number of bacteria inside, and we clearly saw a difference. We saw that our treatment was helping.”

In addition to serving as a key part of her Skoltech Master’s thesis, Ksenia’s research has attracted the attention of physicians in the United States, Russia and beyond.

“At the end of my research course, I did a presentation about my research for residents at USC’s anesthesiology department and it was great because people face this problem everyday – how to treat those patients with antibiotic resistant infections,” Ksenia said. “I talked about the mouse experiments… to build a comprehensive picture – to show the medical doctors how the science in this area actually works.”

She followed up with two similar presentations in April: one at Skoltech, and another at an international congress of anesthesiologists and intensive care doctors in Astana, Kazakhstan.

Professor Zelman expressed pride in Ksenia’s approach to her research, noting that she arrived at USC with a clear vision of what she wanted to accomplish and a wealth of theoretical knowledge to facilitate her efforts. “Practically from the first day she became a member of the laboratory team, performing alongside them all of the work that the laboratory was engaged in,” he said. 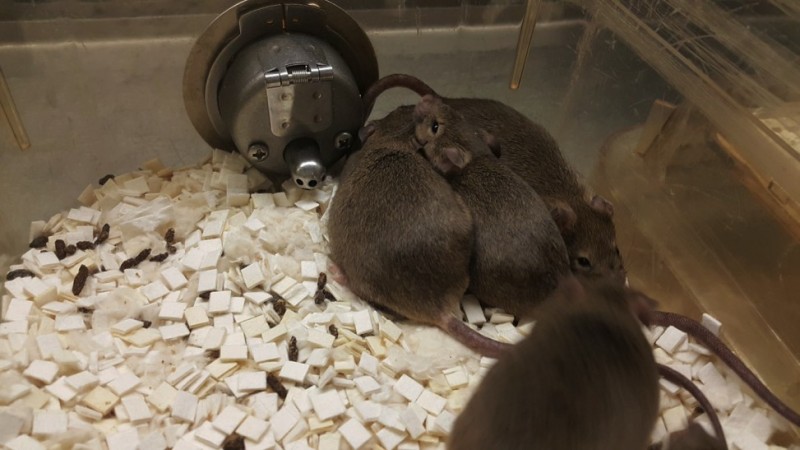 The mice that participated in Ksenia’s research

Ksenia is glad to be back at Skoltech, her excellent experience in California having fueled her desire to participate in joint Russian-American scientific research going forward. She lauded the logistical efficiency and the bountiful resources provided by the Spellberg lab. “Once you need something, you can simply order it, and then you get it the next morning,” she said. “It makes your work so efficient.”

One thing she was struck by was the readiness of the faculty, employees and students at USC and the hospital to provide a helping hand.

“You can even talk to people you don’t know and just tell them your scientific problem and they are happy to answer; they are happy to help you. Most people are very open minded and very friendly and inspired by the work they do. They really care about what they do,” she said.

The energy and focus of the people she worked with inspired her to work tirelessly through 11-hour days at the hospital.

“For some reason, it was not exhausting at all,” she said of her typical workday, which involved waking up between 4:30 and 5:00 a.m., arriving at the hospital by 6:00 a.m., and then attending lectures and conducting lab research until about 5:00 p.m.

Professor Zelman seems to share this sentiment; despite being in his early 80s, he continues to embrace marathon workdays. He says, “Thank God I became a doctor. This is my life, this is my profession. This is, to some extent, an internal need – to work this way. I think that the medical specialty is distinct from many others in that you are with your patients practically around the clock.”

He also attributes his vigor to having worked for interesting clinics in Russia and the United States throughout the course of his career, which has spanned 58 years thus far. “My rhythm is such that I cannot imagine it any other way. It still brings me tremendous satisfaction and pleasure and keeps me young. So, God willing, I will continue to work with such strength for as long as I can.”

Speaking about the potential of future Skoltech students conducting research at USC, Professor Zelman said that such prospects were bright as long as the candidates share some of Ksenia’s attributes, in particular her knowledge, capabilities and drive, “which set her apart from day one.” 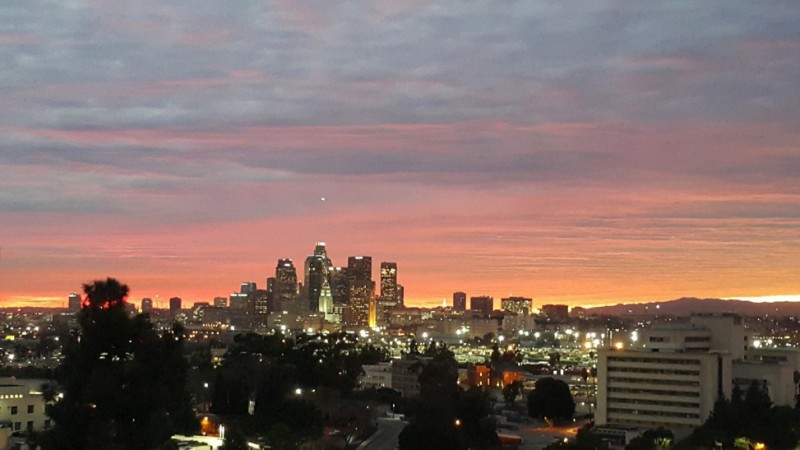 The skyline of downtown Los Angeles, as viewed from the lab

The exterior of the old medical center building