A blend of excitement and anxiety was palpable on Friday as about 170 MSc hopefuls from around the world gathered at Skoltech to endure high-stress interviews, comprehensive exams and a challenge inspired by the late, great Nikola Tesla.

Selection Days – which runs from Friday morning to Saturday afternoon – marks the final round of the institute’s admissions gauntlet.

For the past several months, these candidates have exposed themselves to stringent reviews of their professional and academic records. The crème de la crème was invited to participate in Selection Days. This is no easy feat; in all, Skoltech receives about 15 applications for every student slot. They have now arrived at the final hurdle that stands between them and a fully funded, world-class MSc program. But they still face an uphill battle.

“The selection process at Skoltech is unique among Russian universities,” said Denis Stolyarov, Head of Student Recruitment. “The reason we implement a multi-stage application process is because we want not only to evaluate the professional and academic achievements of the candidate; we also want to look at their motivation. The key thing here is we want to understand why they want to study at Skoltech, where they see themselves in two years, what their professional track will be after graduation – whether they want to enter industry or academia, or launch their own tech startup.”

Stolyarov explained that motivation is crucial at Skoltech because academic success at the institute requires a strong personal drive and a deeply ingrained sense of responsibility. 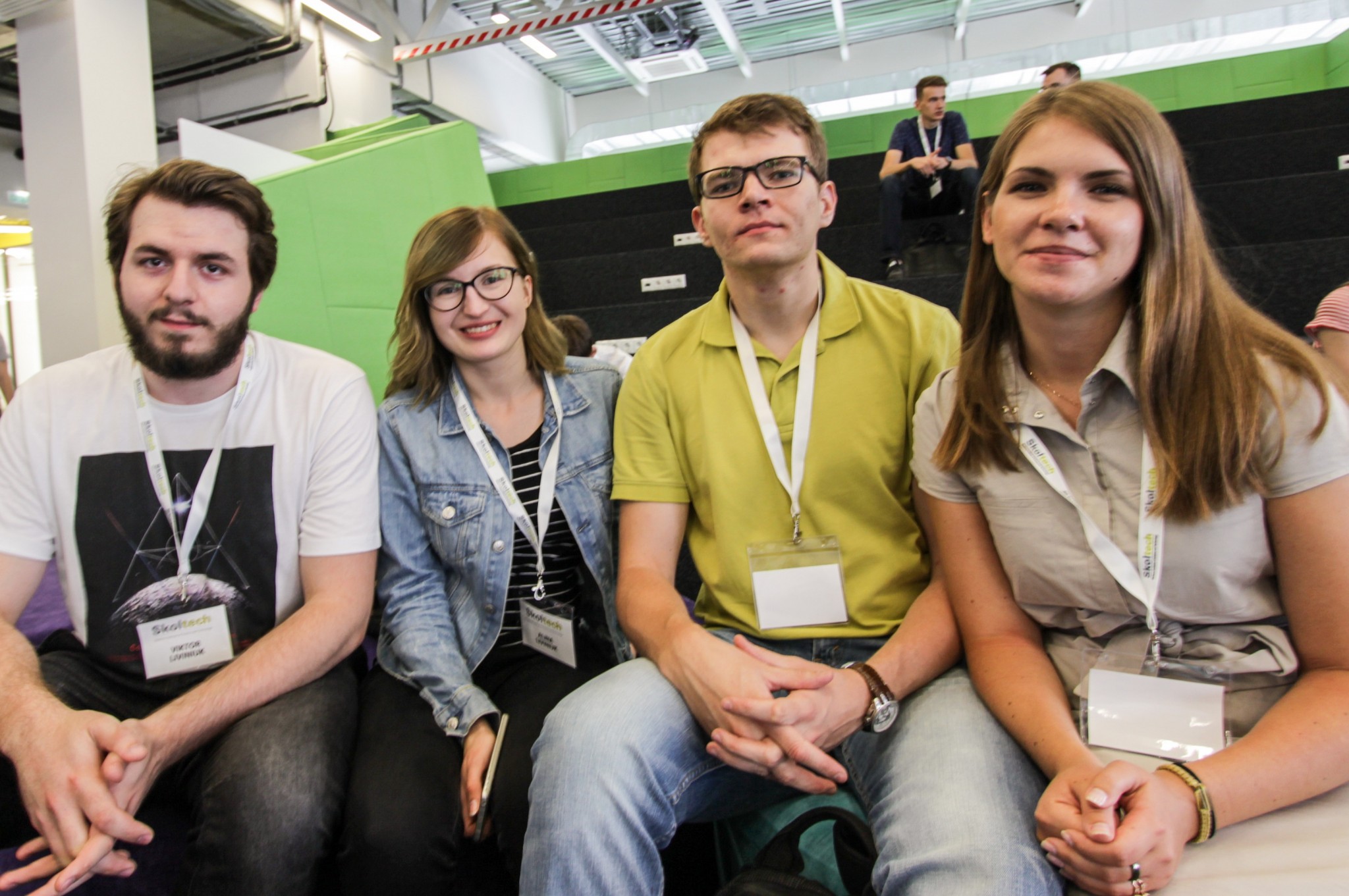 A walk past some of the interview rooms in the morning revealed student after student being peppered with questions that would have been complex in any language – a process made all the more dramatic by the fact that these interviews were being held in English – Skoltech’s official operating language –  which many candidates speak as a second language with varying degrees of proficiency.

Most MSc applicants sat for exams covering a broad range of topics, from calculus to matrix functions to probability theory. A few students – specifically those who hope to enter Skoltech’s Space track – took exams more specific to their field of study.

An informal survey of students milling around the event revealed that while many felt calm about the written exam, nerves ran high when it came to the interviews.

Stolyarov explained that the students who have made it through the initial rounds of admissions have strong academic records, thus putting them at ease about the exams.

The interview panels, on the other hand, tend to prove stressful due to the intimidating qualifications of many of the professors comprising them.

That said, not all applicants were nervous. “I’m not super worried, because it will just be about expressing myself, and showing them what I’m capable of,” one student said as he waited for his interview to begin.

For their part, many of the panelists we spoke with were impressed with the level of the MSc candidates they had interviewed.

“So far we have had really strong candidates. Everyone I’ve spoken with has had a very impressive background,” said Leyla Ismailova, a research scientist with Skoltech’s Hydrocarbon Recovery Center, who was on the selection committee for the MSc program in Petroleum Engineering. 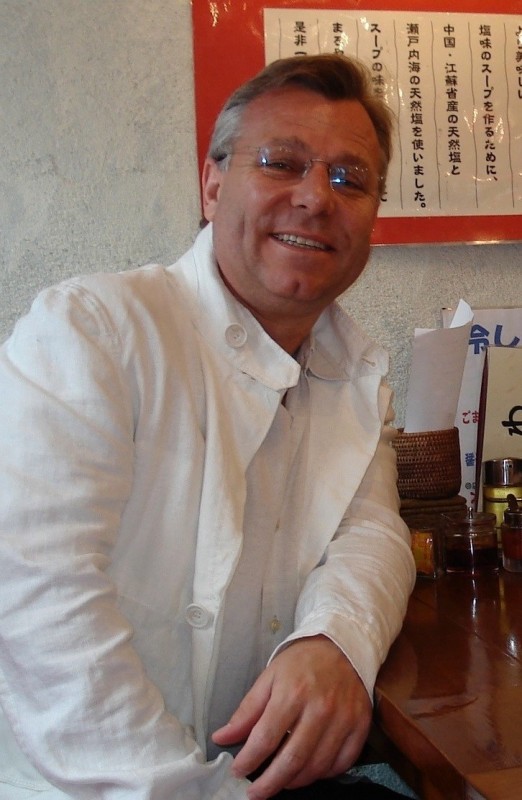 In addition to proving their hard science and presentation skills, MSc hopefuls participated in a challenge designed to assess their skills of negotiation – a challenge inspired by legendary Serbian-American physicist and inventor Nikola Tesla.

“[The billionaire entrepreneur] Elon Musk is a model of innovation, and his car company [Tesla Inc.] is named after Nikola Tesla, who is one of the greatest physicists of the 20th century,” said Professor Kelvin Willoughby of Skoltech’s Center for Entrepreneurship and Innovation. “He worked in a highly scientific and systematic way, and this came to the attention of Thomas Edison, who was possibly the greatest inventor of the late 19th and early 20th centuries.”

As explained by Willoughby, Edison had a wealth of practical engineering skills, as well as a knack for commercialization. In contrast, Tesla was devoted primarily to pure science – a loyalty that came at the cost of negotiation skills and ultimately perpetuated his lonely, penniless demise.

“Tesla pioneered direct current technologies that Edison in turn commercialized, and Tesla was an employee of Edison. So Tesla the brilliant scientist and Edison the brilliant businessman worked together, which led to the success of direct current. Edison got rich, but Tesla did not, because Tesla did not negotiate a good deal for himself,” said Willoughby.

While working for Edison, Tesla was also a pioneering inventor of the concept of alternating current electricity, which would eventually become the standard type of electrical distribution system used around the world.

Edison’s wealth continued to spiral, while the fruits of Tesla’s labor failed to materialize in his own bank account. Finally, the physicist severed ties with Edison in disgust.

Industrialist George Westinghouse then expressed an interest in Tesla’s alternating current technology. Though he negotiated a better deal with Westinghouse than he had with Edison, history repeated itself. Westinghouse’s fortune exploded while Tesla continued to live in squalor, moving from hotel to hotel, leaving a trail of debt in his wake with each relocation, his central sense of companionship in life coming from the pigeons that he walked to the park every day to feed.

He died indigent and alone in a hotel room in 1943.

The moral of the story?

“You may be a great scientist, but you need to know how to negotiate, and how to enter into partnerships with others,” Willoughby said. “Tesla, despite being brilliant, died in poverty and desolation. Edison and Westinghouse died rich.” 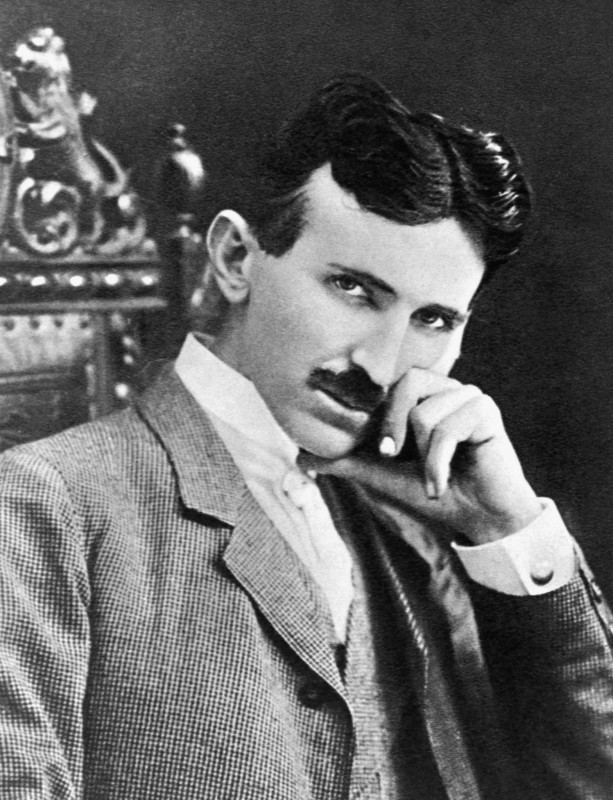 While Skoltech is a science institute at its core, its faculty recognizes the imperative of teaching students the soft skills required to make an impact without being taken advantage of.

To assess potential students’ negotiation skills, Willoughby led a three-hour negotiation challenge on Friday, during which candidates were split up into hip hop groups and record companies. Each group was given a competing set of demands. The students then faced off, advocating for their own interests while also striving to strike a mutually beneficial deal. Volunteers wandered the room, ranking students on a variety of criteria.

As explained by Shreya Santra, a current MSc student in Skoltech’s Space track who served as a volunteer monitor of the challenge: “We’ll be grading them from zero to five depending on how well they negotiate their deals, what sorts of advantages they derive for their team and how proactive they are in negotiating, as proactivity is important to success as a Skoltech student.”

Willoughby explained that this all boils down to ensuring that Skoltech’s graduates won’t suffer a fate similar to Tesla’s.

“You come to Skoltech to study science, but science alone is not enough,” he said. “Skoltech teaches students to be innovators. So this game we’re playing today is practice for what it’s like to negotiate deals amid uneven playing fields. Skill in negotiating deals is one part of being a successful innovator.”

Recruitment director Stolyarov added that in addition to evaluating their soft skills, the challenge aims to ease tensions and foster a sense of camaraderie between MSc hopefuls. “This gives them a great opportunity to communicate, to get to know each other, to build a team, and this helps them to cope with the stress otherwise involved in Selection Days,” he said.

In addition to completing science exams, interviews and a challenge, students will return on Saturday to complete TOEFL exams to prove their proficiency in English.

Once all of this data has been collected, the review committees will make their final decisions in the coming week. 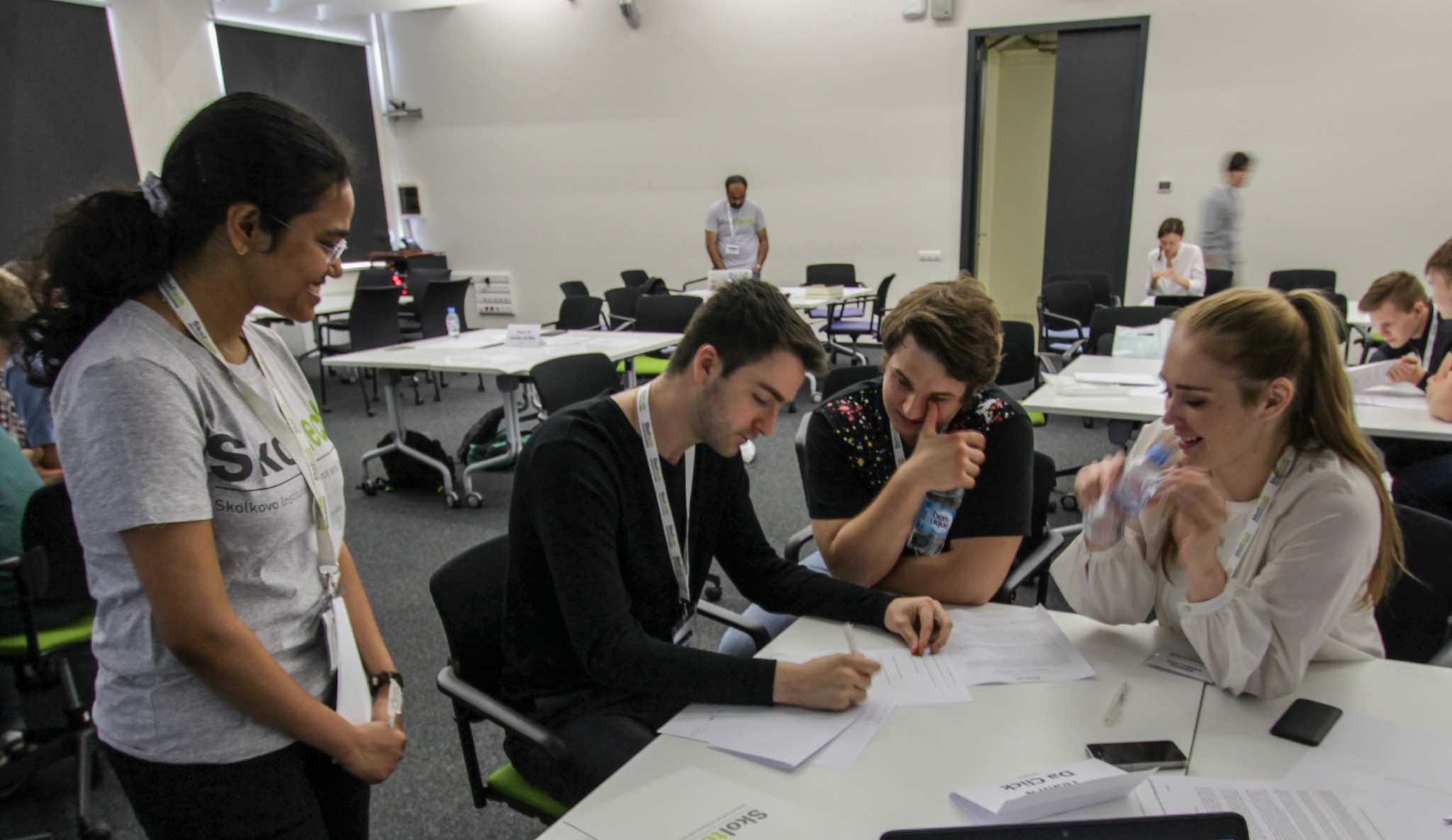 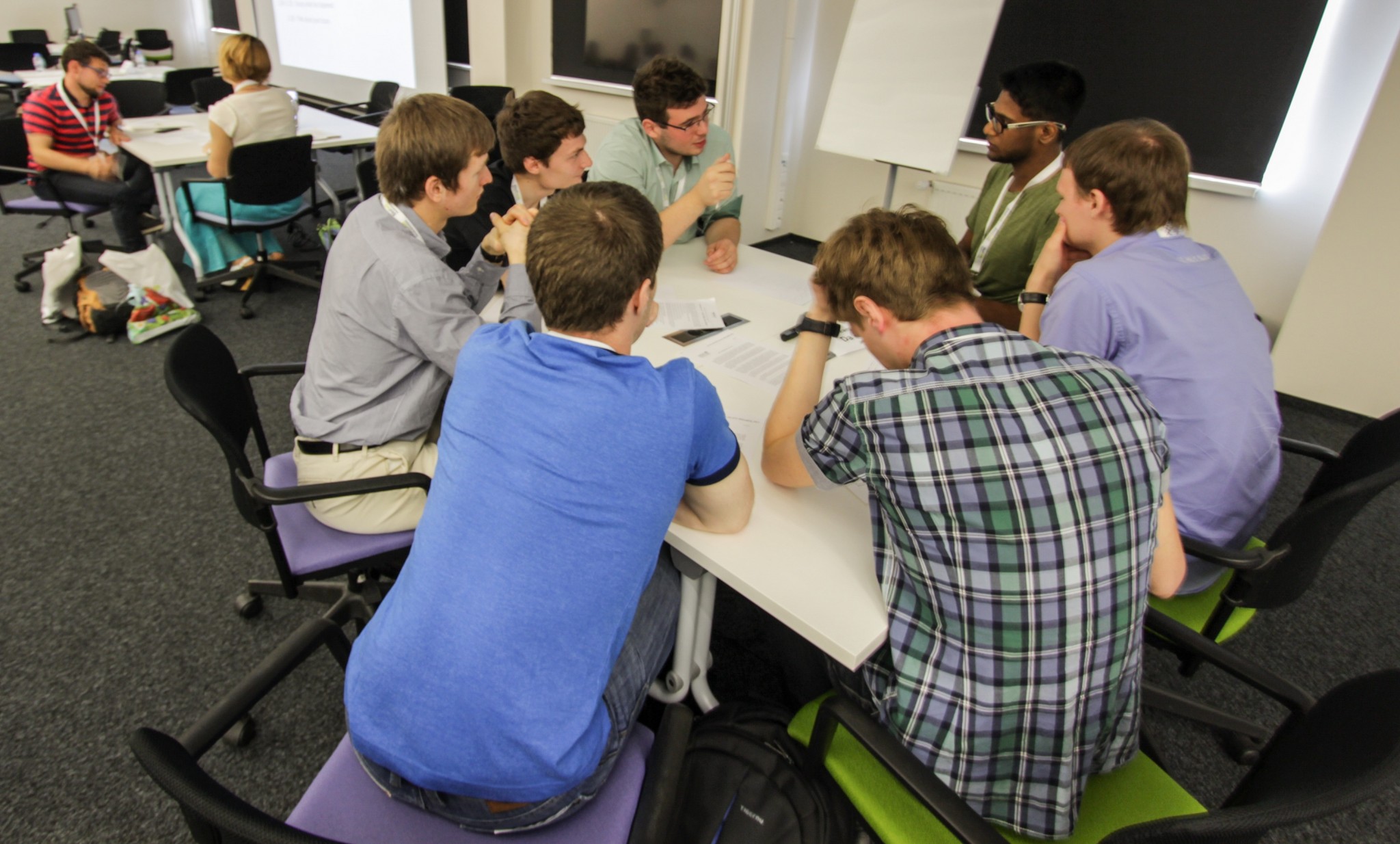 MSc hopefuls struggle to reach a compromise that will benefit all sides during the challenge. Photo: Skoltech.