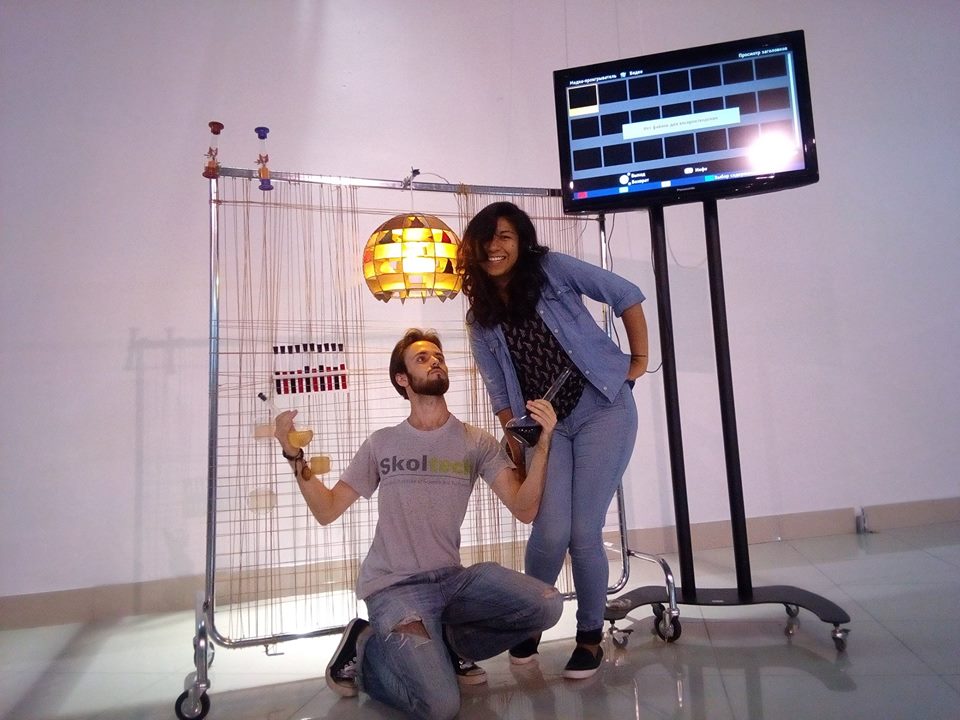 Skoltech MSc students Anton Krotov and Laura Elidedt Rodriguez pose with a lamp that was built as part of their bioart project at the Sirius Center for Gifted Education. Photo: Anton Krotov // Skoltech.

What do a painter, a flautist and a couple of figure skaters have in common?

Having completed a summer science camp under the tutelage of a team of Skoltech MSc students: they all now share the unique capability of crafting environmentally friendly leather from yeast and bacteria.

In 2015, Russian President Vladimir Putin spearheaded the establishment of the Sirius Center for Gifted Education (Sirius) in the southern Russian resort area of Sochi. The center’s goal, according to a statement issued by the Kremlin, is to detect and develop talent in secondary school students from across Russia, with a particular emphasis on the natural sciences, arts, sports and technical creativity.

Each month since its inception, Sirius has provided hundreds of talented children and teens – aged 10 to 17 – with the opportunity to gain an in-depth education in their chosen field from leading experts and professionals.

Invited teachers hale from the upper echelons of a broad range of fields and disciplines – from biotechnology to ballet. After completing their core lessons, students are given the opportunity to immerse themselves in a different field of their choice.

Toward that end, Skoltech MSc students Anton Krotov, Laura Elidedt Rodriguez, Evgenia Alekseeva, Kira Koshkareva and Varvara Verkhova spent part of their summer holidays this year expanding the scientific horizons of gifted artists and athletes. They did this as part of a new program inaugurated by Center for Data-Intensive Biomedicine and Biotechnology (CDIBB), led by Professor Konstantin Severinov, that enables Skoltech MSc students to gain pedagogical experience while fostering a passion for science in school-aged kids. 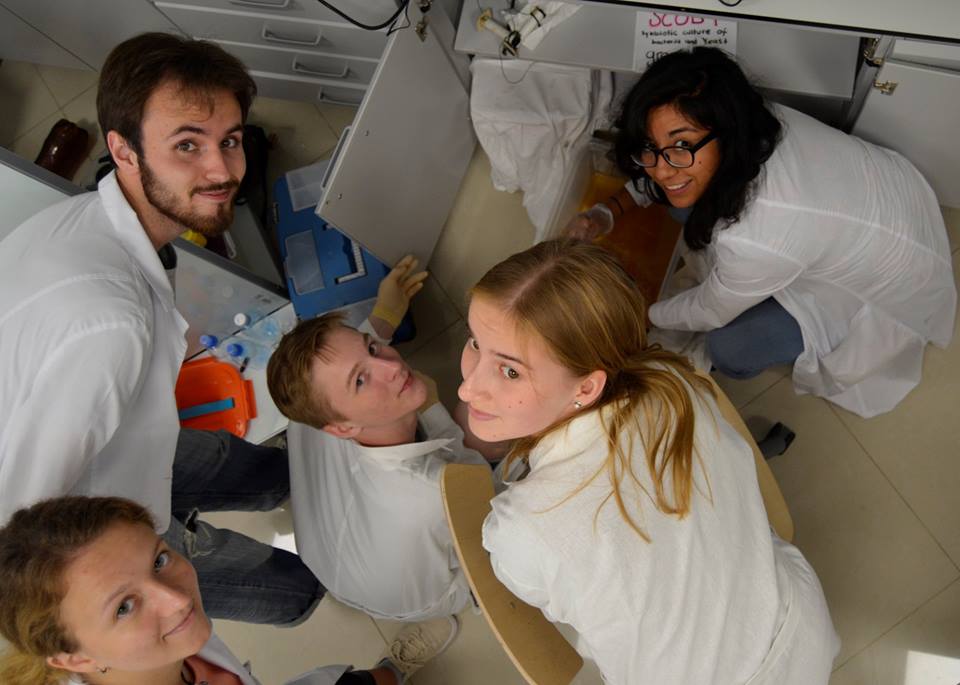 “Sirius provided us with a unique opportunity to become part of a laboratory team and to participate in projects developed by kids who have excelled in absolutely different fields,” Krotov said in a recent interview, noting that the dozens of youth science projects he and his team oversaw this summer ranged from an investigation of novel sources of electricity to the development of a robotics system for biomedical research.

A project that centered on growing artificial leather in a laboratory, which proved particularly popular among students from a variety of disciplines, was the brainchild of Skoltech’s Elidedt Rodriguez.

“I am deeply interested in the bioart field, which is emerging rapidly at the intersection of nature, science and creativity,” said Elidedt Rodriguez.

She cites Brooklyn-based fashion designer Suzanne Lee as her inspiration for the project. Lee is the creator of Biocouture – a company that specializes in creating wearable fashion from biological matter such as yeast, bacteria, fungi and algae. In an interview with TED, Lee explained that this method has the potential to mitigate the pressing environmental and social issues presently associated with the mass-manufacturing of clothing.

“Scientists have emerged as the new artists, and cells are the canvas of this field,” Elidedt Rodriguez said. “We are living the biological revolution, and soon it will be reflected not only in our healthcare and medical treatments, but also in facets of our lifestyles like diet and clothing.”

To create their leather, the Sirius students took the symbiotic cultures of yeast and bacteria and then let them ferment for about three weeks. The fermentation process bred a form of bacterial cellulose that resembled leather in appearance.

Once their swaths of cellulose were complete, the students cut them up and dyed them with henna, ultimately creating lampshades that can best be described as avant-garde. 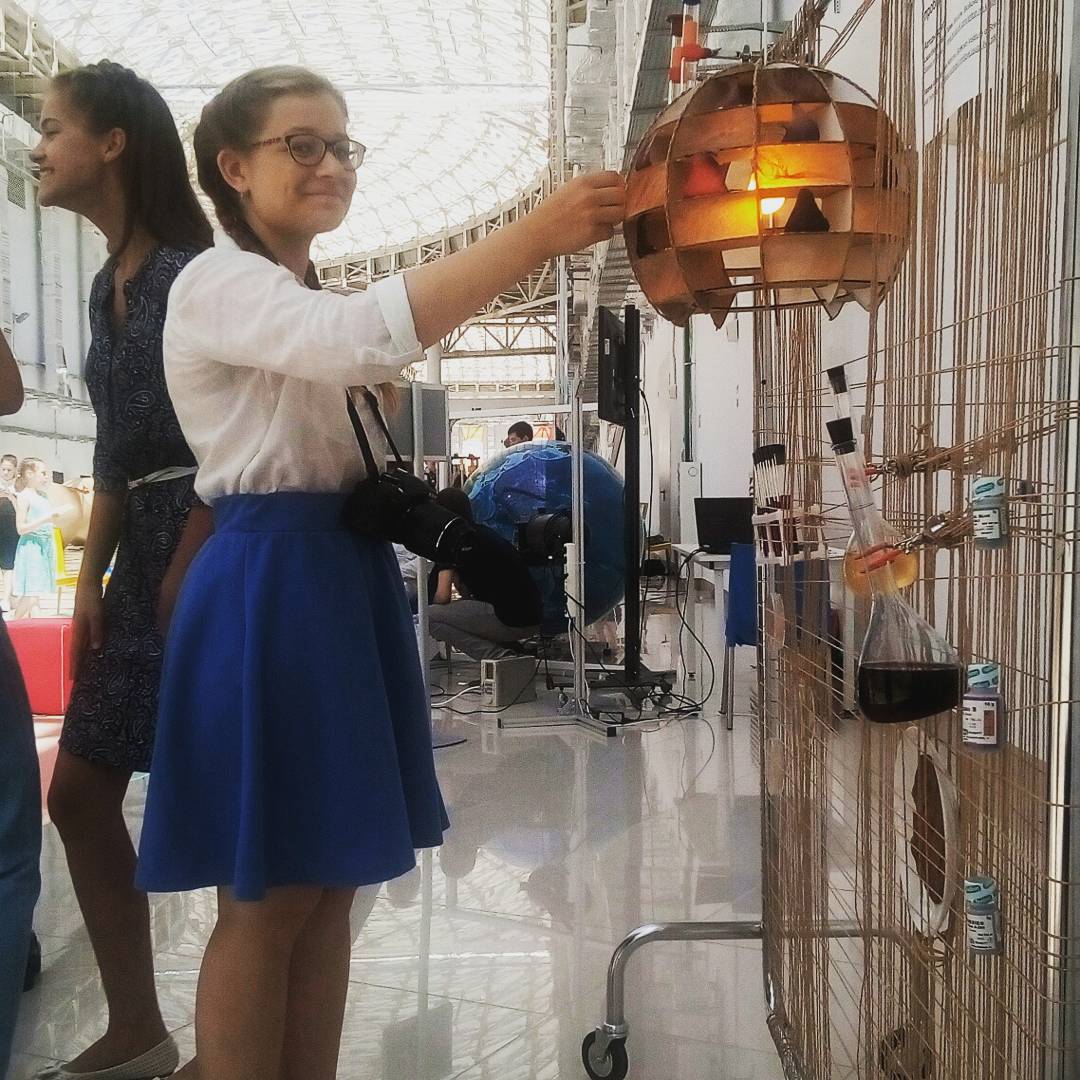 Krotov said that the decision to focus on lampshades was motivated by a desire to create the coolest product possible within a limited timeframe. “Time is the most valuable and necessary resource here, because growing the material takes weeks,” he said.

In preparing the project, Elidedt Rodriguez focused on creating conditions conducive to work outside of a laboratory; she wanted to ensure that the students would be able to continue honing their crafts after leaving Sirius.

And at least one of her students can’t wait to recreate the project at home, but with a slightly unorthodox goal. Sixteen-year-old figure skater Sonia wants to harvest bacterial cellulose as a means of ornamenting her skating competition costumes.

Krotov explained that he and Elidedt plan to stay in touch with Sonia via Skype to advise her from afar as she attempts to create a host of new and increasingly complex cellulose accessories, ranging from costume adornments to wallets to boots.

Elidedt Rodriguez is proud that Sonia has embraced bioart with a fervor that mirrors her own. “She is completely excited with this idea and we are extremely happy to try this fusion of art and science,” Elidedt Rodriguez said.

Sonia was so moved by her experience with bioart that she plans to deliver a speech on creating leather from bacteria and yeast at an upcoming scientific conference in her hometown of Orenburg.

The summer session left a lasting impact on gifted students from a wealth of other disciplines as well.

Anton, a 14-year-old flautist, said he was immediately drawn to the idea of creating fabric from biological matter. “Everything we did with our hands was very interesting, but I’d say the most memorable experience was when we painted pieces of cellulose, since no one else really knew what would happen to them or how they would react,” he said.

Sixteen-year-old painter Yulia G. said that upon learning it was possible to grow wearable materials, she knew she would regret it if she didn’t attend the course.

Yulia A., a 13-year-old figure skater, said that she was drawn to the club because – despite having excelled in dance as a child – her ultimate goal in life is to become a doctor. She was drawn to the opportunity to spend her free time studying biology, and creating her lamp – which she nicknamed “Scoobie” – was a highlight of the Sirius experience for her.

Some of the Sirius students who participated in the bioart project (from left): Sonia, Anton, Yulia G. and Yulia A. Photo: Skoltech.

Looking back on the summer, Krotov is satisfied with the work he and his team completed. “Now that all is said and done, I can say with confidence that we gained a wealth of experience that will enable us to make good recommendations for the Skoltech students and professors who choose to participate in Sirius next summer,” he said.

As a Mexican student living in Moscow, Elidedt Rodriguez praised Sirius and the surrounding community for greeting her with open arms and good weather. “I come from Latin America, so the summer in Sochi has been like paradise – a breath of warm weather is revitalizing for me. The people and businesses in the area are also very friendly to non-Russian speakers,” she said.

Of the many impressions Sirius and Sochi left on her, the strongest may be of the opportunities that the center provides its youngest participants.

“You see the students are always busy and happy; they are always training, painting, reading or building something and making friends who share their passion for the arts or sciences,” she said. “These children meet here from different tracks and cities throughout Russia and together they create wonderful projects and build their networks. For the students, Sirius is the first step toward fulfilling their own dreams, and I am really grateful to Skoltech and Sirius for letting me be part of this wonderful process.”

In addition to Skoltech’s involvement in Sirius described above, the institute’s robotics and energy professors, PhD students and researchers acted as jurors in evaluating scientific essays submitted by Sirius natural science applicants from across Russia. The winners of this contest attended Skoltech’s Start Up Village in June 2017.