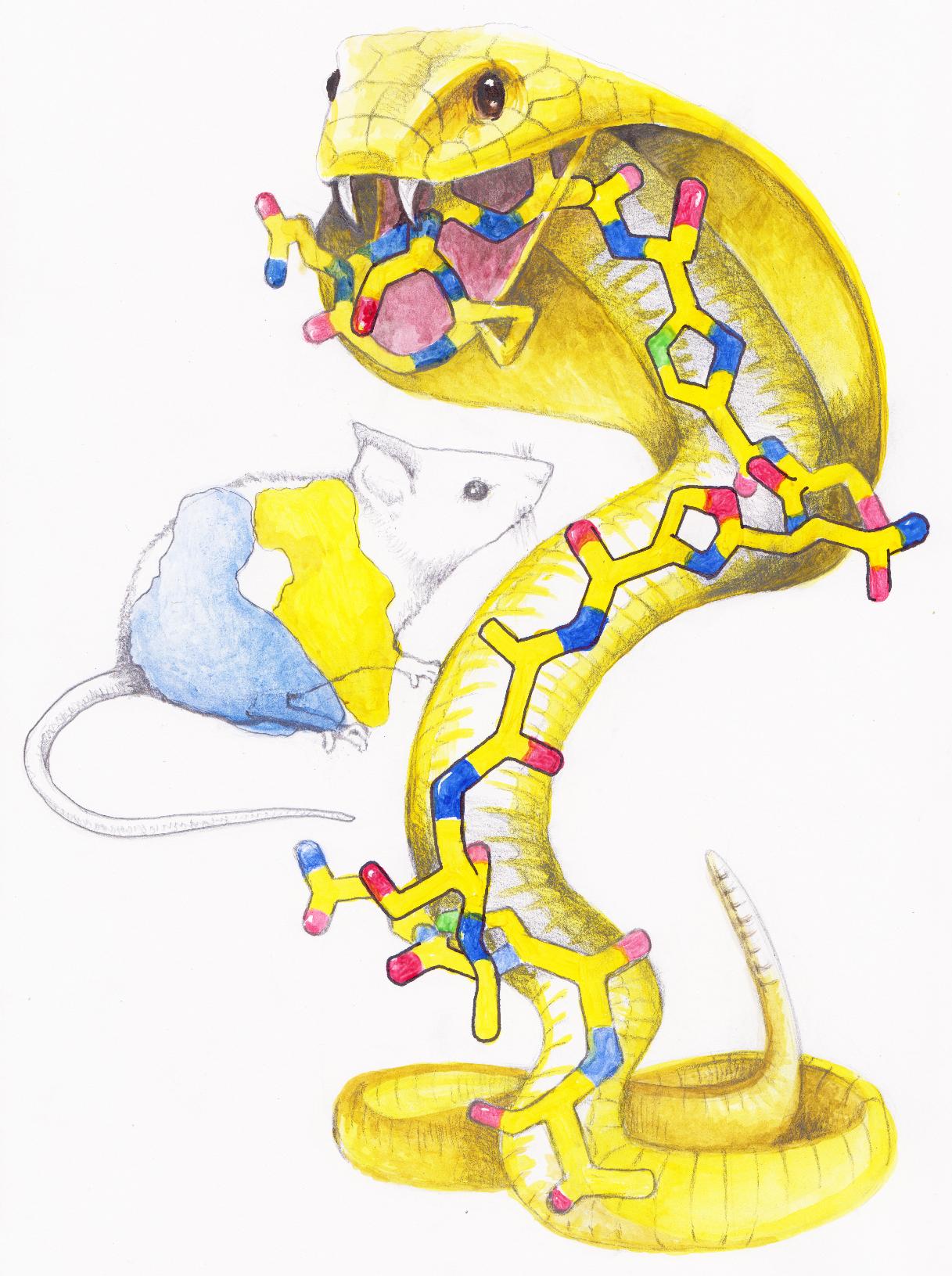 In this artistic rendition of the KLB antibiotic action, the KLB molecule, which has a snake-like appearance and is drawn as a cobra, is posed to attack a ribosome, drawn as a stunned mouse. In actuality, the ribisome is much larger in size than the KLB molecule. Illustration: Maxim Svetlov.

A team of Russian and American researchers led by Skoltech research scientist Mikhail Metelev has discovered and characterized a new antibiotic that is able to stop the growth of bacteria by stalling the biological process of translation.

During translation, proteins are synthesized in the cells: ribosomes – the cellular machines responsible for protein synthesis – connect amino acids – the building blocks of a protein – one by one to produce long chains as instructed by genes. Newly synthesized protein molecules exit the ribosome via a narrow peptide exit tunnel. Mature proteins are released and perform most functions of the cell.

The new antibiotic – named klebsazolicin (KLB) – inhibits protein synthesis by blocking the ribosome exit tunnel, as would a cork in a bottle. When ribosomes try to create new bacterial proteins in the presence of KLB, they cannot add more than two to three amino acids, and thus protein synthesis becomes impossible. Without newly synthesized proteins, bacteria stop growing and eventually die.

To find KLB, the team used bioinformatics, which relies on a large-scale database, statistics and computer analyses to sift through tons of genetic information and predict genes that may be involved in antibiotic synthesis.

Study co-author Professor Konstantin Severinov says: “The most unexpected finding here is that we never really thought that the compound we predicted would target the ribosome. At its core, the bioinformatics-driven approach is designed to find things that are similar to things we already know. The compound that we found is not novel in the sense that it is chemically similar to known antibiotics, but they all inhibit a completely different enzyme, not the ribosome. Our findings highlight just how versatile nature is and how it can creatively adapt similar chemical scaffolds to target unrelated biochemical pathways.”

The team’s findings were published in Nature Chemical Biology.