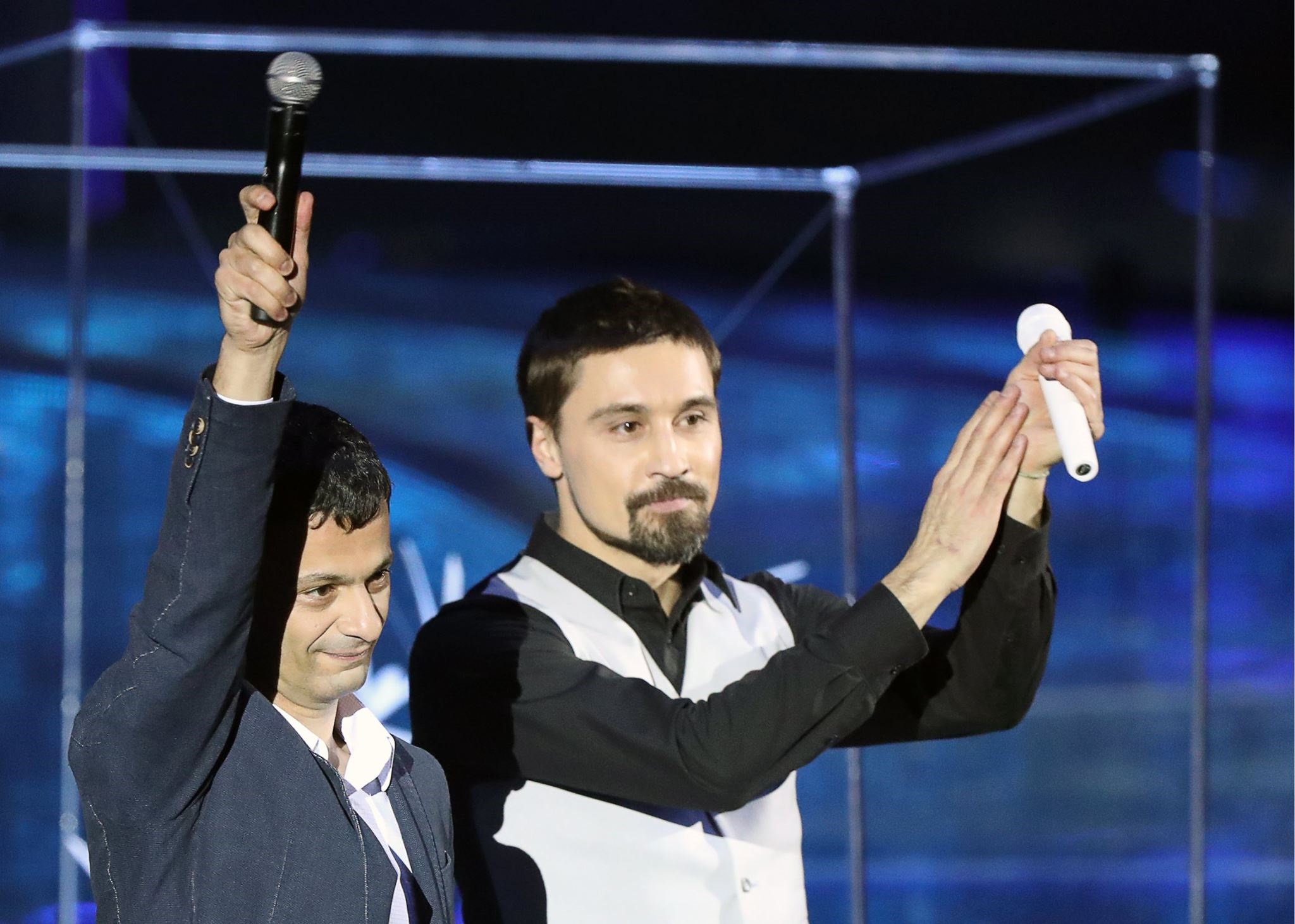 Professor Artem Oganov (left) waves to the audience alongside popstart Dima Bilan during the opening ceremony of the World Festival of Youth and Students in Sochi. Photo: Francesca Nesterenko // Facebook.

Skoltech Professor Artem Oganov was honored in Chicago on Saturday at the award ceremony for the prestigious George Gamow Prize.

Oganov was chosen as among this year’s winners for his seminal work on crystal structure prediction.

The award, established by the Russian-American Science Association, was created to honor the legacy of renowned theoretical physicist and cosmologist George Gamow (1904-1968).

This is only the latest in a whirlwind of high-profile events Oganov has been involved in this fall.

In October, he participated in a meeting with President Vladimir Putin on the sidelines of the World Festival of Youth and Students 2017​ in Sochi.

Oganov explained to the Russian president why he decided to return to Russia after years spent studying and working abroad.

“I left Russia in late 1998 because at the time there was no future for a scientific career generally, nor prospects in my situation,” Oganov explained. “I went to do a PhD in the United Kingdom and afterwards worked there as a postdoc. Then I moved to Switzerland as a leading researcher and then to the United States as a professor. At that time, I believed that I would spend my whole life there. I must say, the West was very kind to me. Later, a chance to work in Russia appeared, and I won a mega-grant, which allowed me to work in Russia four months per year. I liked it so much that I decided to move back to Russia and reunite with my life in a country that was truly mine. My dream is that the day will come when top-level Russian scientists will return to their home country on a large scale – we see dozens or perhaps hundreds of such cases now, but we need more. The country needs them back.”

While visiting the festival, Oganov also had the opportunity to join pop icon Dima Bilan​ on stage during the opening ceremony, host a TED lecture on the discovery of computational materials, and conduct a session of the Russian Academy of Sciences​ on the future of science.

Check out a video of the event, as released by RT and published on the Russkaya Muzyka YouTube account:

In September he became a member of Academia Europea​, an elite pan-European academy of sciences.