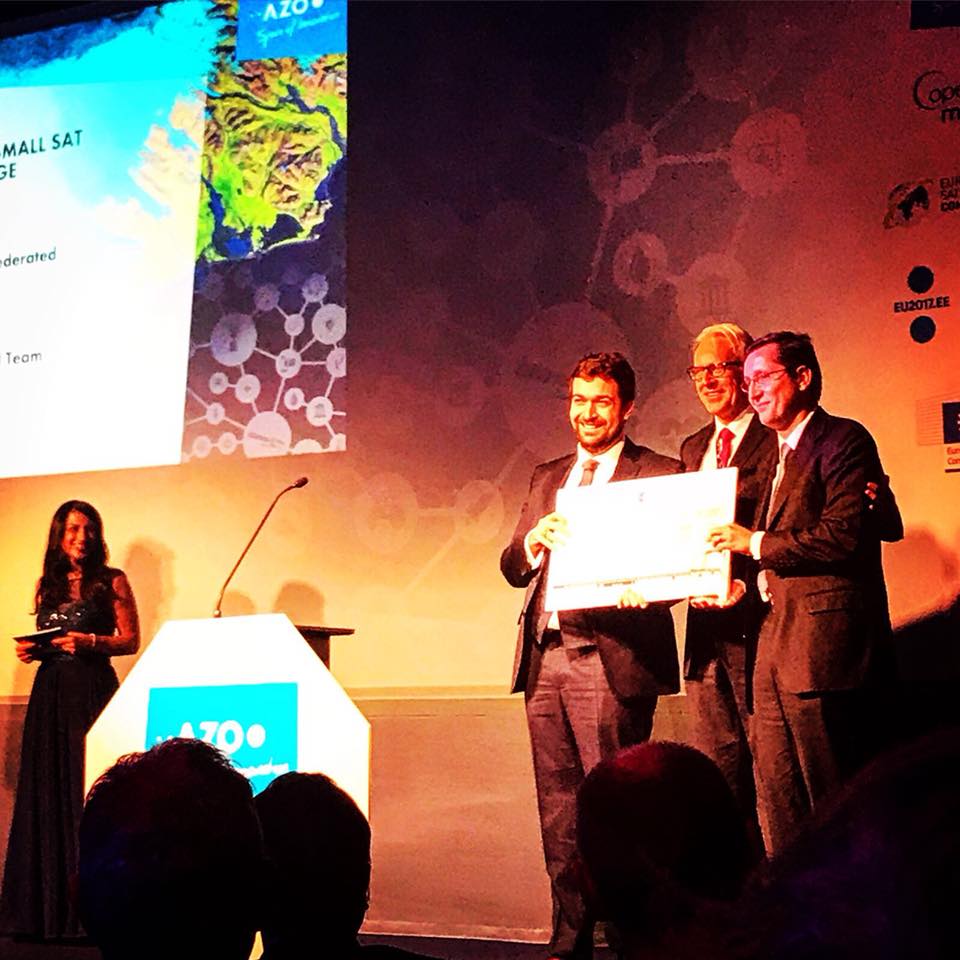 The event, known popularly as the “Space Oscars,”​ took place in the Estonian capital of Tallinn​ as part of European Space Week, a high-profile event organized by the European Commission that aims to bolster ties between the space and digital communities, and to provide visibility to the rapidly evolving space sector.

Golkar and Camps were at the ceremony to be honored for having won the ESA Sentinel Small Satellite Challenge.

But they were surprised to learn at the end of the night that they had also been chosen for the competition’s top honor, the Overall Winner Copernicus Masters 2017 Award, which is broadly revered as one of the most prestigious of its kind in the European space innovation community. Since the competition’s inception in 2011, it has attracted more than 1,100 cutting-edge ideas from researchers with origins across 50 countries around the globe. The 2017 prize pool alone reached upwards of EUR 1.5 million.

According to the official instructions: “Innovative satellite design, development and operations approaches may facilitate the exploitation of the technological advancements achieved by the earthbound consumer IT industry. Promoting the adoption of innovative approaches could foster growth and boost the competitiveness of the European aerospace industry.”

Golkar and Camps rose to the challenge with the FSSCat satellite mission, which consists of two small satellites equipped to collect data on Earth’s sea ice and soil moisture contents. The satellite constellation was developed to complement the land and marine environmental monitoring services of the ESA’s Copernicus Sentinel satellite missions.

The first part of the name of the project derives from Federated Satellite Systems (FSS) – a space systems paradigm that Golkar started developing at Skoltech. In short, FSS strives to enable companies and private users to exploit the unused capacity of satellites in orbit through the creation of a sharing-economy platform that has drawn comparisons to services like Uber and Airbnb.

The second part of the project name derives from Catalonia, home of UPC Spain, where the project design was conceived.

Golkar serves as Principal Investigator with respect to the optical communications intersatellite link (O-ISL) – the key technology underpinning the FSS, which makes it possible for satellites to exchange information using laser signals. “This is one of the first attempts at intersatellite optical communications with nanosatellites. This is truly state of the art,” Golkar said in a brief interview following the ceremony.

“We will demonstrate a new optical intersatellite link technology that we believe to be a key enabling technology of Federated Satellite Systems. It was incredibly satisfying to learn that our research is having a real impact on industry.”

Camps serves as Principal Investigator with respect to designing the two shoebox-sized satellites that comprise the FSSCat constellation, and to enabling them to effectively monitor soil moisture and sea ice.

Asked about their design strategy, Golkar said: “We do not want to reinvent the wheel; rather than trying to design a spacecraft anew, we will purchase a commercial, off-the-shelf platform and will focus our efforts on novel instrumentation. In our case, this is the O-ISL between CubeSats [ED: the two satellites that comprise the system].”

As the winners of the challenge, the team at UPC will receive EUR 1 million and in-kind launch services for their satellite system aboard the Vega launch vehicle from the French Guyana spaceport in late 2018 or early 2019 (date to be determined). They will also receive a cash prize of EUR 10,000 and tickets to observe the satellite launch in Kourou.