“There are no ‘potassium’ or ‘sodium’ startups in Russia”. Skoltech’s trailblazing K-plus startup proves the contrary 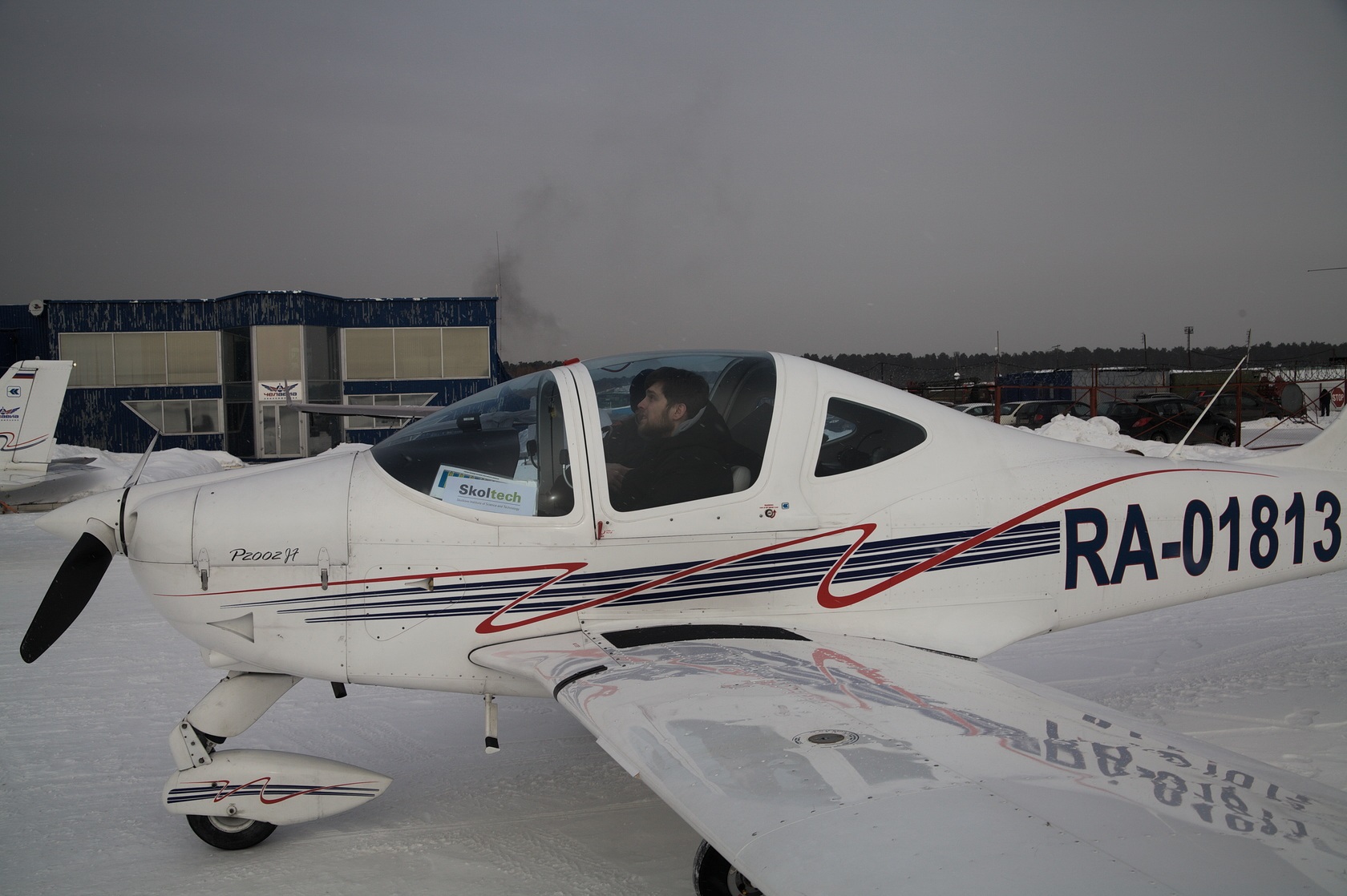 MSc student and ISP instructor Egor Burkov in an Italian aircraft at the end of Pilot School 2017. Photo: Skoltech.

Their fellow MSc students have picked up a rich patchwork of unusual skills as well: from effectively managing stress to speaking basic Esperanto, from quantum computing to reciting little-known facts about Russian intellectual history.

Each January, Skoltech hosts the Independent Studies Period (ISP) – an elective period during which students are encouraged to organize unique courses of their own design, and to pursue studies in fun, exciting and totally new fields.

“A key benefit of ISP is that it offers students a wealth of opportunities to be active, and to take courses that are not connected to their main course of studies. We strive to offer courses that combine practical skills, theoretical knowledge and fun,” said Skoltech Dean of Education Anna Derevnina, who played a key role in developing ISP.

This year, upwards of 40 courses were on offer. We sat down with the leaders of four of them to learn more about this unusual foray into experiential learning.

Pilot School: taking to the skies

Without a doubt, the most popular course of the term was Pilot School, where students rack up dozens of hours behind a flight simulator in hopes of being among the high-scoring few who will end the term behind a real flight deck, preparing for takeoff.

This year’s Pilot School was taught by second year MSc students Arsen Sagoyan, Egor Burkov, and Anton Marin. All three of them attended the course during ISP 2017. With their former teachers having graduated last spring, they decided to take the reins.

Though all three are yet to become professional pilots, Sagoyan and Burkov both became devout flight-simulator users as teenagers, and Marin is a prolific skydiver who has racked up some 98 jumps in just under two years.

Each day of Pilot School began with a lecture. “During our lectures, we taught them how to fly their airplanes safely and in the right direction, how wings work, how lift force is generated, and so on,” said Burkov.

The team then presented students with increasingly complex flight missions to complete.

The students – who numbered about 40 – took turns completing their missions on one of Skoltech’s six flight simulators.

“In addition to the in-class practice, we asked the students to practice on their own time. What was really surprising to us was that they were flying every chance they got. Every time one of us was at Skoltech, we found the simulators were in use,” said Marin. 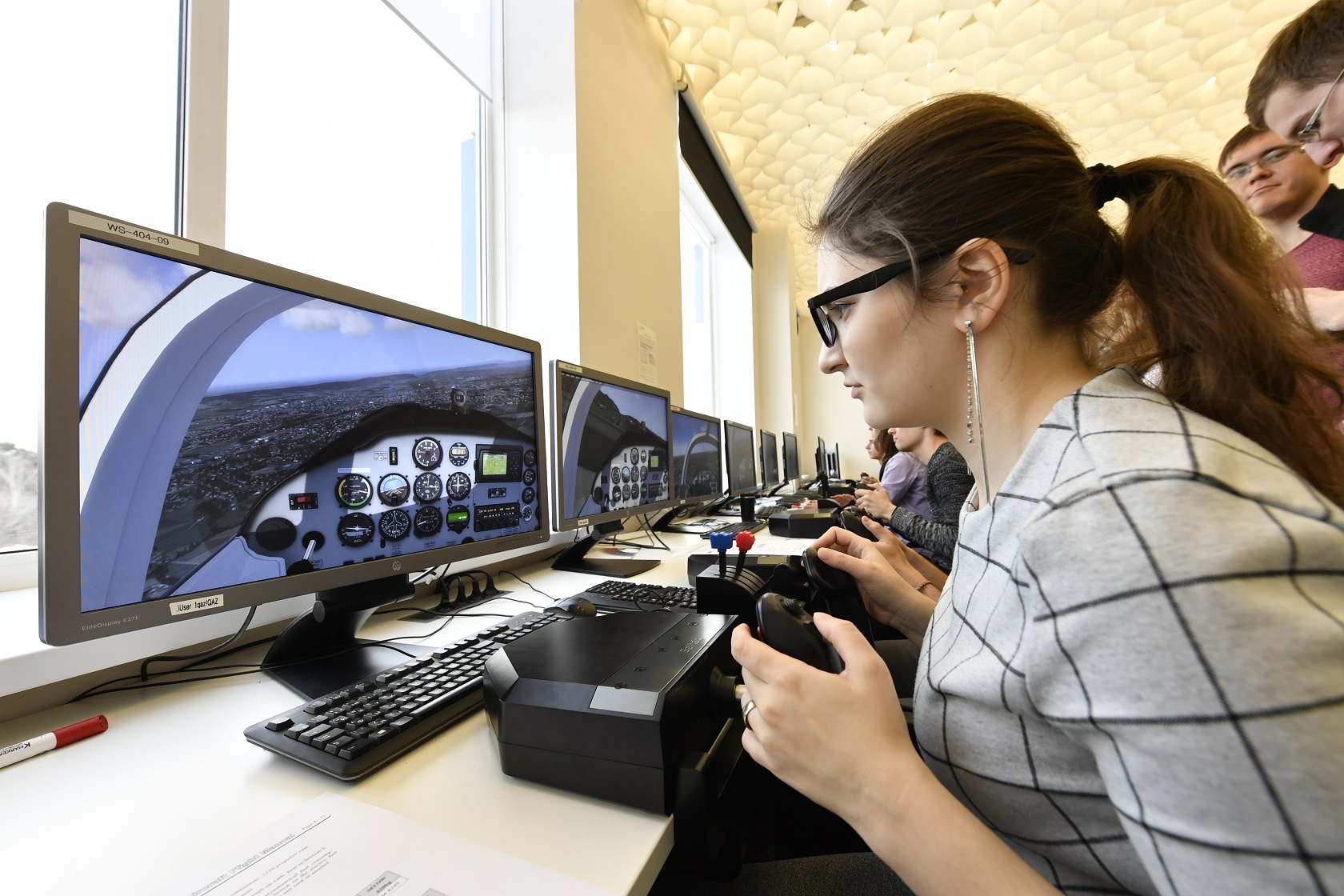 A student works on one of the Skoltech flight simulators. Photo: Skoltech.

Sagoyan added: “Even on weekends and days without classes, they came to Skoltech to practice.”

In the end, the students’ countless hours of hard work were measured in the form of a comprehensive exam – the top scorers of which would have the chance to fly a light aircraft.

“We knew that the most difficult challenge in running the course would be to properly assess student knowledge and skill. There are so many things to take into account. So we devised a formal assessment procedure, and created a special program to rate students’ flights,” Burkov said, explaining that the program automatically assigns penalties for all deviations.

A highlight for many of the students during the course was a visit to airline giant Boeing’s training and research center at Skolkovo.

“This was a great addition to the course as students had the opportunity to ask a high-ranking pilot with a ton of experience lots of practical questions. They were able to put themselves in the shoes of real airliner pilot trainees by witnessing live trainings and exploring giant simulators. Local research center staff also delivered a lecture, where the students learned about Boeing’s latest developments in aircraft design and flight safety,” said Marin.

Burkov added that he believes the Boeing trip played an invaluable role in attracting students to aviation careers – a key factor that inspired him to teach this year’s course. “Commercial and unmanned aviation have huge potential in Russia. I think Skoltech’s talented graduates could change the status quo and bring new innovations to the industry,” he said.

“When I first saw Esperanto on the course list, I was shocked,” laughed Derevnina. But once she asked the course leader for all the critical details, she realized that his case was as compelling as his passion was contagious.

The Esperanto language, developed by Polish ophthalmologist Ludwik Lejzer Zamenhof in the late 19th century, is the world’s most widely spoken constructed language. It was designed to be a simple-to-learn universal language, and its aim was to foster international communication.

Though it never took off as the global language, it still has many devotees, as we learned from ISP course instructor Artur Griogrev, who fell in love with the language while visiting a global conference in Kiev several years ago with his father, who is also an Esperanto enthusiast.

“At the conference I met people from all over the world – from America, Asia, Africa, etc. It was really fun to communicate with people from a lot of different countries. The Esperanto-speaking community is known for being really friendly,” said Grigorev, a first-year MSc student. 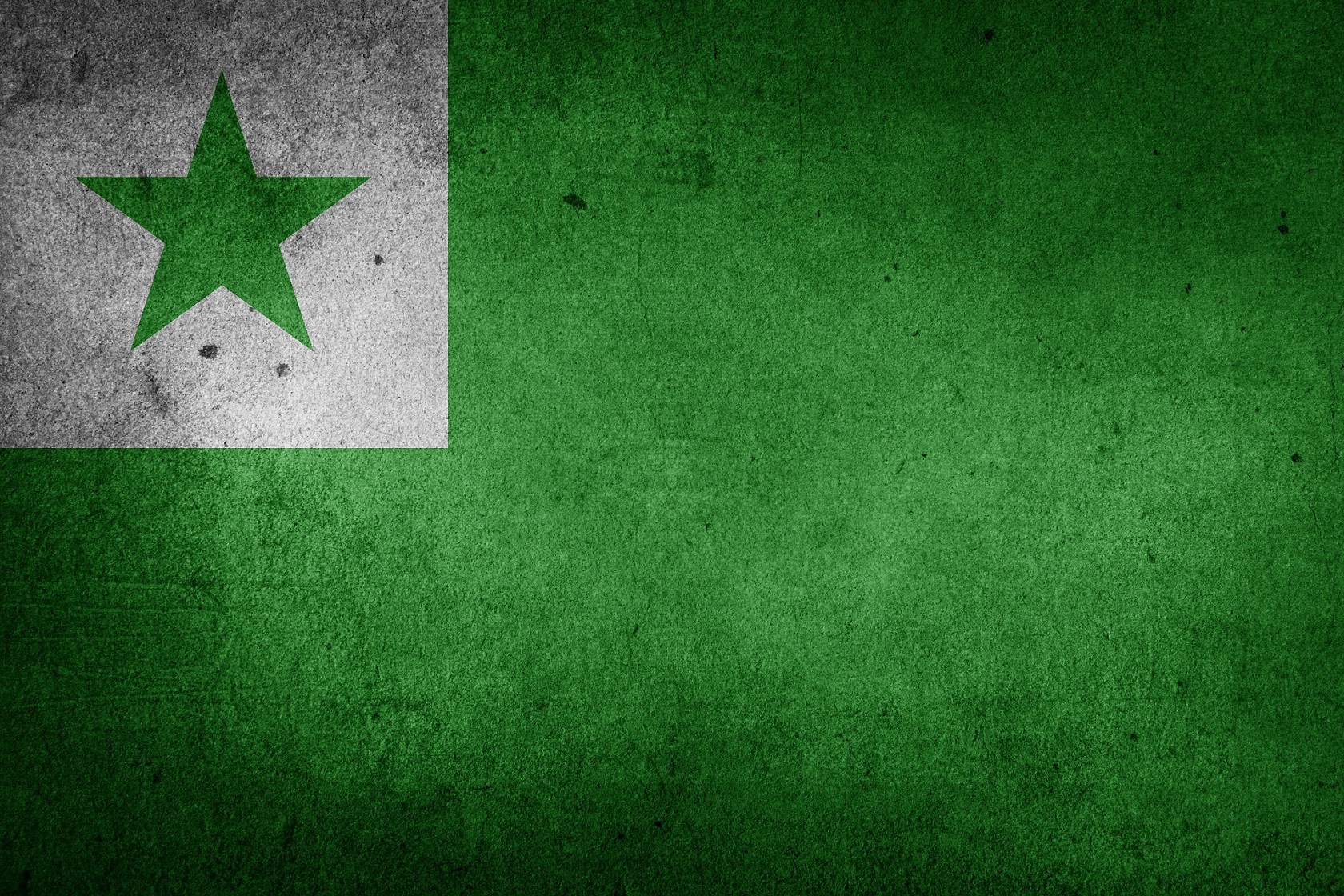 Soon after the conference, he moved to Moscow for university, and promptly joined a local Esperanto speaking club.

Asked why he decided to share Esperanto with his fellow Skoltech students, he said that he had wanted to try his hand at teaching. “It was my first experience teaching a course, and it was challenging for me. But Esperanto is also really fun to learn, and ISP is a period when people are inclined to have more fun than usual with their learning,” he said.

Though over the course of 30 hours, he succeeded in teaching his students the very basics of the language, he hopes next year to host a more time-intensive course.

“Venu al Esperanto kurso ĉe Skioltech sekvontjare!” he said in closing, a phrase that translates to: “Come to the ISP Esperanto course at Skoltech next year.”

Another course – Scanning, Printing, Casting, taught by Skoltech engineer Vadim Tarasyuk – aimed to familiarize novices with the whole of the 3D printing production chain. And in an unusual twist, this class was open to schoolchildren from the Skolkovo International Gymnasium.

“We had to reschedule the course a few times, and by the time we set the correct time, a lot of Skoltech students weren’t able to join, so we opened the course up to 10th graders from the local gymnasium,” Tarasyuk said. 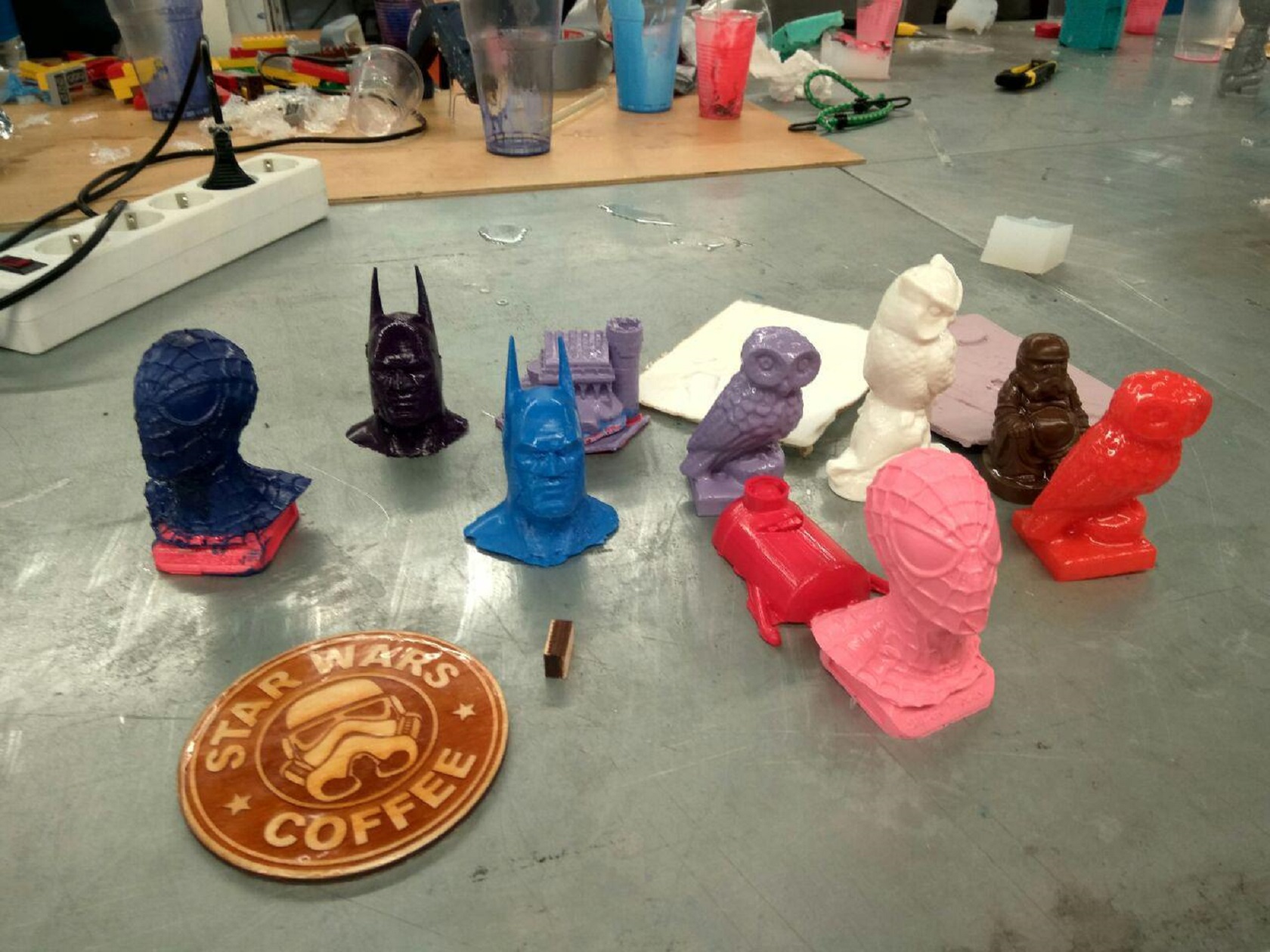 This turned out to be a key highlight for the instructor, who taught the kids to create several fun souvenirs, including the heads of popular superheroes and a storm trooper’s head on the body of a Buddha figurine.

“It’s easy to impress schoolkids,” he said. “The Skoltech students usually know something about the technique, but for the pupils, everything is more interesting. And in the end, most of them ended up creating really good models”

Over the course of three weeks, Ekimova led her classmates on such excursions as a production of Swan Lake at the Kremlin Palace and a day trip to the ancient city of Kolomna. Each excursion was laden with lessons in Russian history and language.

Organizing trips for upwards of 30 students was a challenge, she said, but to her, it was worth it.

“I really like Russian culture. I’m a patriotic person and a Russian language teacher. I taught the course to show our international students how wonderful and interesting our country is,” she said, adding that she also gained a great deal from teaching the course. “There are so many unique people at Skoltech, and it was great to have a chance to get to know so many of them.”

While the course was initially geared toward international students, Ekimova noted that it also has a great deal to offer their Russian counterparts. “Many students [of all nationalities] spend a bunch of time working hard on their research and don’t make time to get out and explore. But I believe that seeing more of our country can help students expand their horizons and come up with new ways to innovate or solve complex tasks. Plus many Russian students are from different towns, and don’t know all that Moscow has to offer,” she said.

According to Derevnina, this course proved to be a critical part of this year’s ISP offerings. “This course provides opportunities for our international students to visit Russian museums, theaters and other cultural institutions while learning about Russian culture and traditions. I think this is extremely important. After seeing how well it went, we have decided that we should launch a full [credit-bearing] course in Russian language, culture and history.”

Overall, Derevnina was satisfied with the success of this year’s ISP. “It provided a lot of opportunities to be active, to take some theoretical courses, to take some practical courses and to have some fun,” she said. “And it was all closely connected with Skoltech’s main educational principle of learning-by-doing.”

Among the more popular excursions during the course was a night at the ballet, featuring Russian classic Swan Lake. Photo: Public domain.