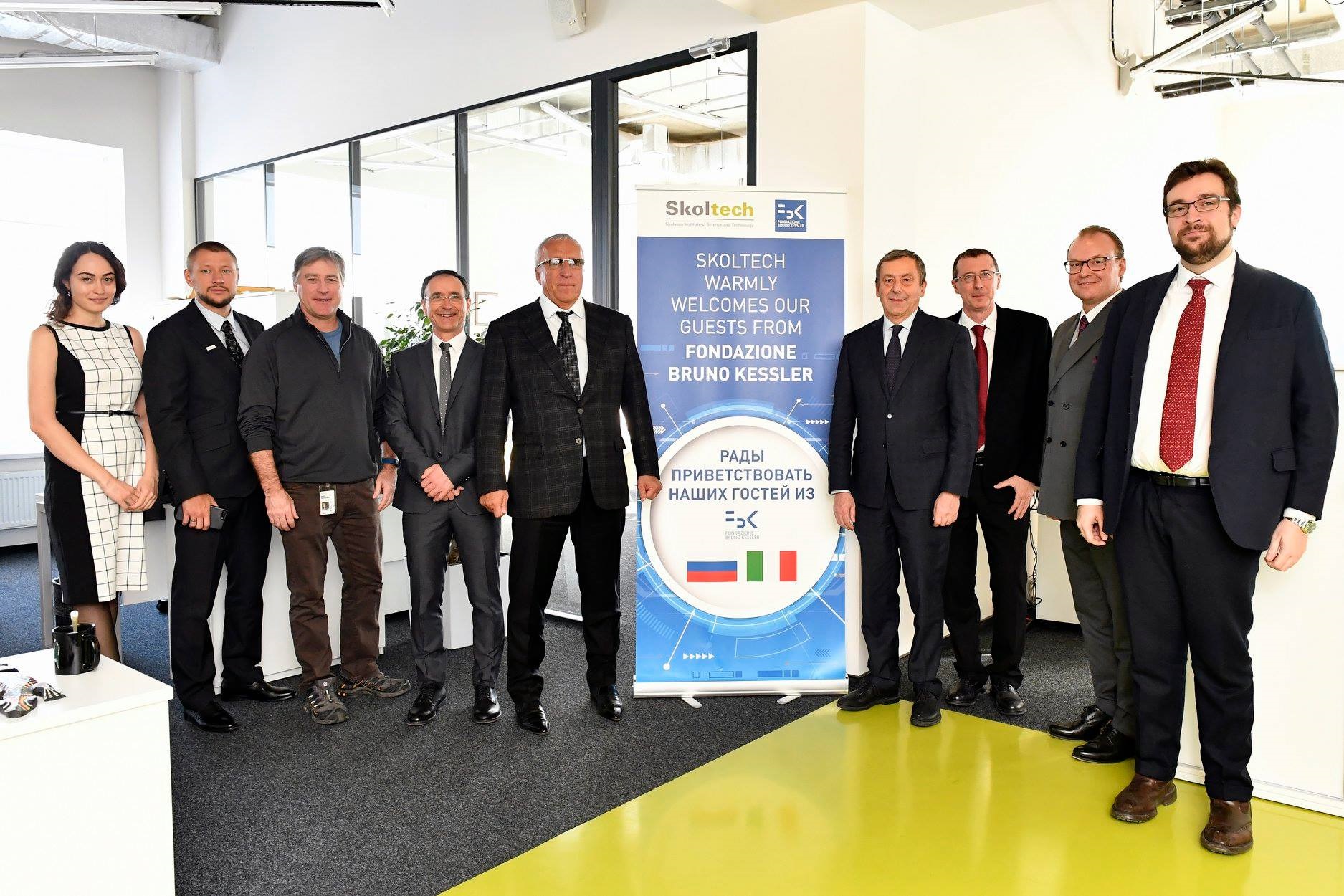 The two delegations meeting at Skoltech ahead of the signing. Photo: Skoltech.

The agreement was signed on Thursday by Skoltech President Alexander Kuleshov and FBK President Francesco Profumo, who flew to Moscow for the occasion.

FBK is a leading Italian research institute, which has frequently received top rankings for scientific excellence from the Italian National Agency for the Evaluation of University and Research Systems (ANVUR).

On the occasion of the signing, of the agreement FBK President Profumo said: “Among the numerous internationalization activities of [FBK], in recent months we have worked in particular on an agreement with this young, but already big Russian institution, Skoltech. The university was founded in 2011, but it has already attracted talents from many countries in the world. The model to which it refers is that of MIT and I think this is an excellent model for us too. The goal of our trip to Moscow [was] to meet the [Skoltech] president and the researchers who will be working with our FBK colleagues: this is a good sign that shows that the [FBK] is recognized, recognizable and has increasingly sought to establish new relationships.”

In the words of Skoltech President Kuleshov: “For Skoltech, as a young, innovative institute, it is extremely important to establish professional contacts with major international investors. FBK is among the best in this sphere. We had no difficulty finding projects which we hope in the near future will become joint initiatives.”

Skoltech Professor Alessandro Golkar, who played a key role in establishing ties between Skoltech and FBK, said, “FBK is a highly renowned research institution in Italy, with an important track record of achievements in science and technology. FBK and Skoltech share similar views on research, education and innovation. By working together on joint projects, both institutions will benefit and will open opportunities to students, researchers and faculty. We at Skoltech, among other topics, look forward contributing to joint initiatives in the space domain.”

The framework agreement establishes several joint initiatives, including the co-financing of two scholarships within the FBK PhD program. These scholarships will relate to research in the fields of energy and innovative solutions for 3D modeling.

The former will be hosted by the Skoltech Center for Energy Systems in conjunction with the FBK’s Applied Research on Energy Systems (ARES) unit. The relevant PhD research will focus on the behavior of ceramic composites for solid oxide fuel cell electrodes, with the aim of improving energy and mechanical characteristics.

The latter will draw together the FBK 3D Optical Metrology (3DOM) research unit and the Skoltech Space Center and will focus on innovative 3D modeling solutions for buildings to be used in urban planning and management, cadastral checks and other operations. As explained by Golkar, the applications the group is working on derive from space data.