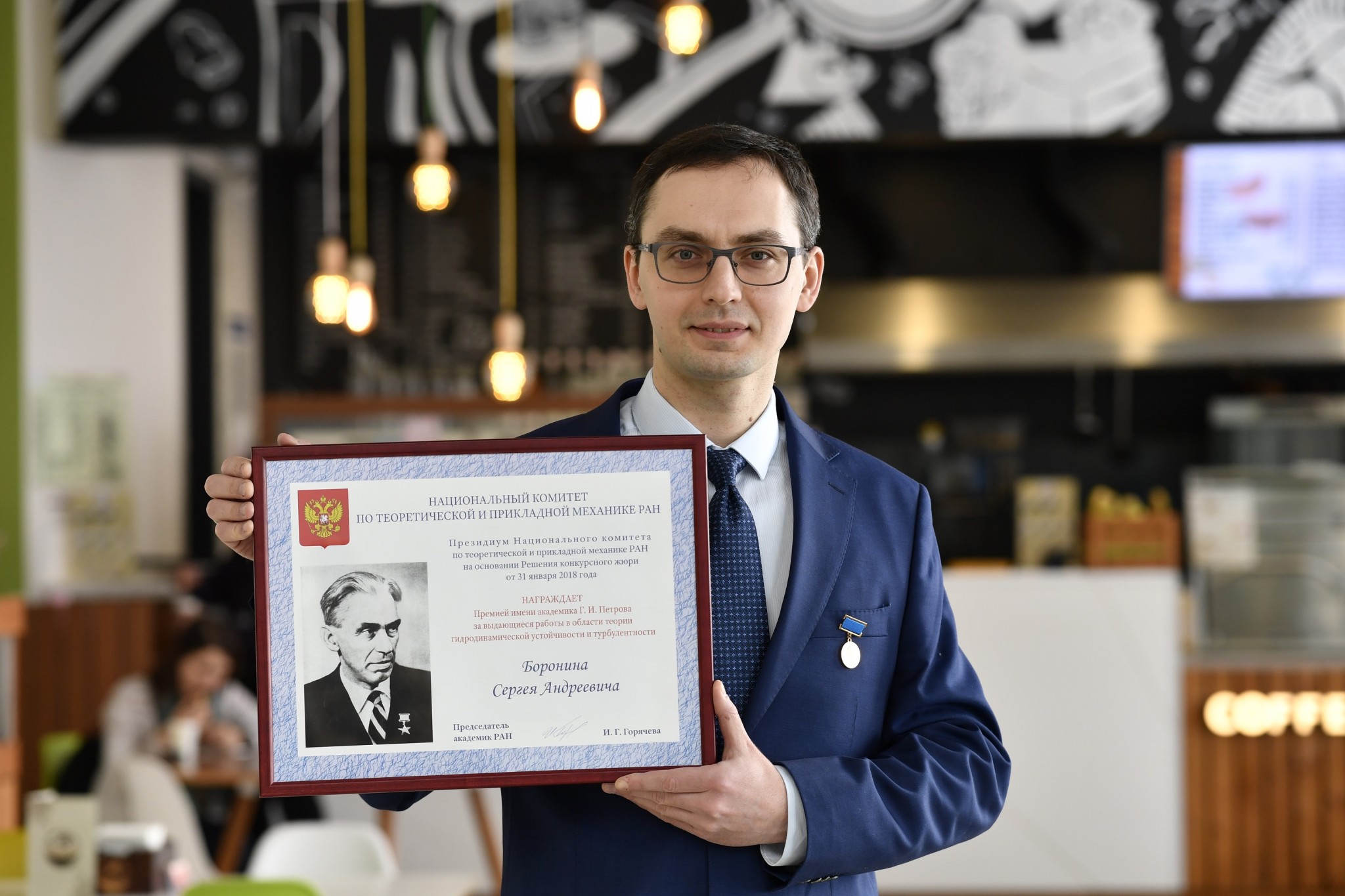 Sergey Boronin, pictured at Skoltech with his prize. Photo: Skoltech.

The honor is bestowed by the Russian National Committee for Theoretical and Applied Mechanics once every two years to Russian citizens who have achieved outstanding work related to the theory of hydrodynamic stability and turbulence. During each awards ceremony, two winners are selected. They can be either groups or individuals.

Boronin was chosen for his pioneering research on the hydrodynamic stability of multiphase and particle-laden flows.

“This is the result of about 15 years’ work, which I started as a student in the Faculty of Mechanics and Mathematics at Lomonosov Moscow State University,” he said.

He explained that this particular field is important, but also unique.

“Control of laminar-turbulent flow transition is required for the successful design and implementation of various technological processes involving particle-laden flows, to mention just a few, pneumatic conveying or hydrotransport in pipeline systems, chemical reactors and ventilation ducts. Several oilfield technologies, namely, hydraulic fracturing and well cementing, rely heavily on the control of instability triggered at interfaces between fluids with different physical properties, for example, Saffman-Taylor or Rayleigh-Taylor instability,” he said.

“The topic of hydrodynamic stability theory and transition to turbulence falls somewhere in between hydrodynamics and mathematics, as it requires deep knowledge in both these disciplines. To the best of my knowledge, there are only a few research groups around the world who are working on the instability of particle-laden flows, and there are no other groups working actively on the topic in Russia,” he said.

He explained that what truly distinguishes his studies are their consideration of novel physical factors related to flow configuration and the parameters of the particulate phase on the stability of particle-laden flows.

“These factors have never been considered by other authors,” he said. “The results we’ve obtained have provided for a significant extension of the applicability domain of theoretical hydrodynamic stability analysis to real dispersed and multiphase flows.”

Boronin’s studies have been published widely in leading fluid mechanics journals from Russia and abroad, including the Journal of Fluid Mechanics, Physical Review E, Physics of Fluids, Fluid Dynamics and Doklady Physics.

The official award acceptance ceremony took place during the opening of the recent Hydrodynamic Stability and Turbulence 2018 conference, where Boronin delivered an invited lecture.

“I feel a great sense of honor and responsibility after having won this award,” Boronin said. “It is a great pleasure when your work captures the attention of academic society; it provides new momentum for further work and high motivation for the continuation of these studies.”

He added that he feels compelled to evangelize this often overlooked area of research among young scientists and students in Russia and beyond.

The award’s namesake, Georgy Petrov, was a legendary Soviet scientist and professor at the same Moscow State University faculty where Boronin completed his studies. Petrov’s work had a significant impact on various areas of applied gas dynamics. He played a key role in shaping the scientific sphere of space gas dynamics. In particular, he contributed to the development of thermal protection technology in the earliest Soviet spacecraft. In addition to his strong scientific achievements, Petrov was reputed to be a great leader, having served as the head of the Department of Aeromechanics and Gas Dynamics at Moscow State University for 32 years, and having made significant contributions to the foundation of the Space Research Institute of the Russian Academy of Sciences.