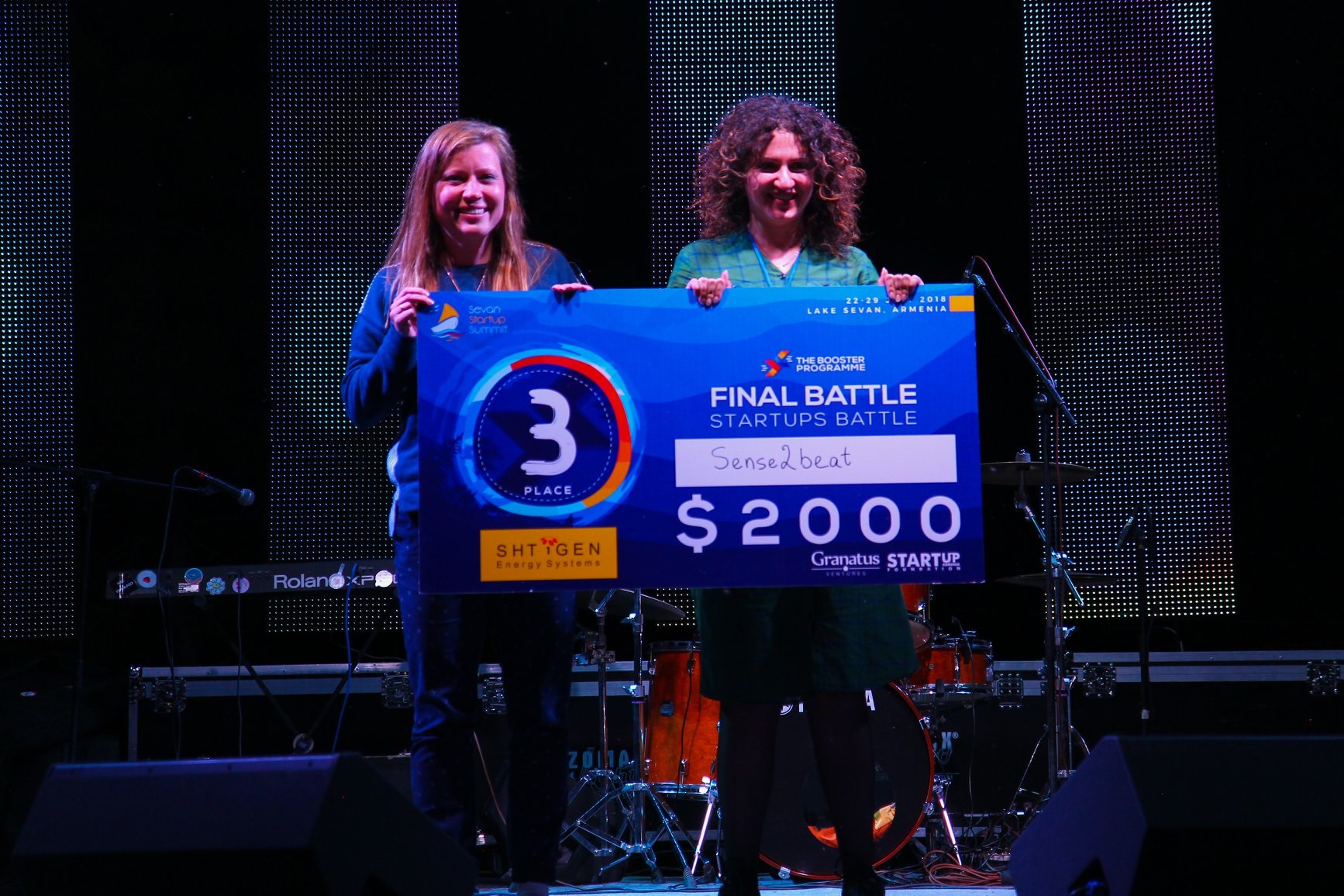 Skoltech PhD student Natalia Glazkova received a prestigious award and a cash prize at the Sevan Startup Summit in Armenia for her project Sense2Beat – a heart monitoring biosensor with clinical-grade accuracy.

Sense2Beat is a wearable prolonged electrocardiogram monitoring system. It was designed to record users’ heartbeats in order to gather diagnostically valuable data. The device can be used to screen for heart rhythm disorders, thereby promoting the early detection of cardiac disease and decreasing the load on healthcare systems. Glazkova developed the device with the support of Skoltech Professor Tatiana Podladchikova and recent graduate Daria Stepanova.

Since its inception in 2016, the Sevan Startup Summit has attracted up-and-coming entrepreneurs and investors from around the globe. This year, the event was attended by over 1,000 entrepreneurs from 35 countries, including upwards of 120 startup teams, as well as investors, representatives of venture funds, mentors and business professionals.

Armenian President Armen Sarkissian even attended the event to deliver a motivational talk and participate in the awards ceremony.

Skoltech was represented at the summit by Karina Gurgenova, Knowledge Transfer Program Manager at the institute’s Center for Entrepreneurship and Innovation, who served as a speaker and jury member for an educational startup competition.

Glazkova won third place in the Booster Final Battle – the summit’s top competition, which is open to startups that – like Sense2Beat – have already developed an early prototype and secured some funding. Of some 125 potential competitors, the top 18 applicants were selected. By the end of the summit, these 18 were narrowed down to seven competitors who vied for greatness in the Booster Final Battle.

Sense2Beat overcame fierce competition to take third – an honor that brought with it an award of USD 2,000.

In addition, Sense2Beat courted interest from the Science and Technology Angels Network (STAN) – a prominent group of Armenian professionals from around the world who have come together to invest in science and tech startups.

“Investors are looking for strong science and early data. Natalia has shown fantastic results over the past two years within the STRIP program. Today we received additional confirmation about her progress, despite the fact the Final Startup Battle presented some serious competition. We are proud to have such result-oriented young entrepreneurs and will support her as she moves forward; I hope her project will attract pre-seed funding soon,” said  Gurgenova.

Glazkova has been a member of the Skoltech community since she matriculated at the institute during its first academic year in 2014. She is now pursuing her PhD at Skoltech under the supervision of Professor Podladchikova, with support from Professors Rupert Gerzer and Clement Fortin.

During her time at Skoltech, Glazkova has gained various forms of support for her product; in addition to having earned a coveted Skolkovo residency, the project won backing from the Skoltech Translational Research & Innovation Program (STRIP).