Scientists from the United States and Russia looked into the peculiar change of phase in a quantum material exposed to the laser pulse. The results of this study perceived as a significant advancement in optoelectronics were published in the prestigious scientific journal Nature Physics. 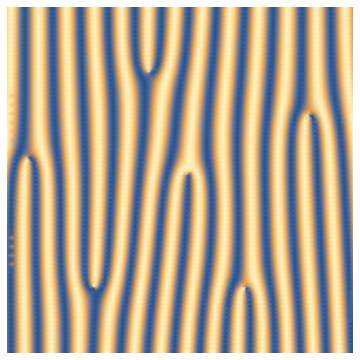 Topological defects in a charge-density wave – a conceptual sketch. (Courtesy of B.V. Fine) )

If you take a piece of ice in your hand, it will melt, i.e. go from the solid phase into the liquid one. Nature offers countless other examples of phase transitions triggered by a change in temperature. However, exposure to colder or warmer environment is not the only reason for phase transition that can also occur under the influence of the laser which is capable of changing the temperature very quickly.

In the paper published on 15 October, an international group of scientists, including researchers from the Massachusetts Institute of Technology (MIT) and Skoltech, looked into the effects of the laser pulse capable of causing a phase transition in a quantum material where electrons spontaneously form a charge density wave. The paper reported evidence that the laser pulse generates long-lived microscopic objects termed topological defects, that should be taken into account when designing new optoelectronic devices based on this class of materials.

A team of MIT researchers led by Professor Nuh Gedik conducted a series of staggeringly complex experiments to capture a material’s state at very short time intervals using state-of-the-art equipment: a change in the material subjected to the laser pulse was registered with time resolution of less than one-trillionth of a second!

A group of theoretical physicists from Skoltech led by Professor Boris Fine gave a helping hand to their American colleagues in interpreting their findings and spotting the topological defects.

“Our study revealed important differences between light-induced phase transitions and their equilibrium counterparts,” says Nuh Gedik. “By using an ultrafast laser pulse, we melted an ordered state and used a number of different methods to make “movies” of different physical observables during the subsequent recovery with femtosecond time resolution. By analyzing these movies, we discovered that, contrary to equilibrium phase transitions, defects are formed in the light-induced phase changes and the recovery of the ordered phase is governed by the healing of these defects.”

“Electrons behave oddly in quantum materials, where a charge density wave arises. This is very interesting from both the basic and applied research perspective,” Boris Fine explained. ‒ It is next to impossible to calculate this behavior directly, especially if the material is cooled very quickly, so we have to rely heavily on experiment. We work like detectives in the sense that we have to consider plenty of circumstantial evidence, which in our paper suggests that the topological defects brought about by the laser pulse prevent the system from quickly going back into a state with a homogeneous charge density wave.”

“Collaboration with Skoltech was key to figure out a physical picture that is consistent with all of the experimental data,” noted Gedik. The Russian researchers concurred with Gedis’s sentiment. “Collaboration with our colleagues from MIT was an invaluable experience for me,” said Skoltech PhD student Pavel Dolgirev. “Their relentless questions prompted by the experiment pushed us to give second thought to every aspect of our theoretical understanding,” ‒ added Dr. Alexander Rozhkov, Senior Research Scientist at Skoltech.

This joint study became possible thanks to the Next Generation Program (NGP) aiming to support the collaboration between Skoltech and MIT.