The dream scenario for quantum computing, when the concept was first proposed back in the 1980s, was to develop a system based on the principles of quantum mechanics that, for certain problems, could enable much faster computations than conventional computers. Now, as the technology is beginning to move from theory into practice, a shortage of available talent looms as a potential inhibitor of the technology’s growth. 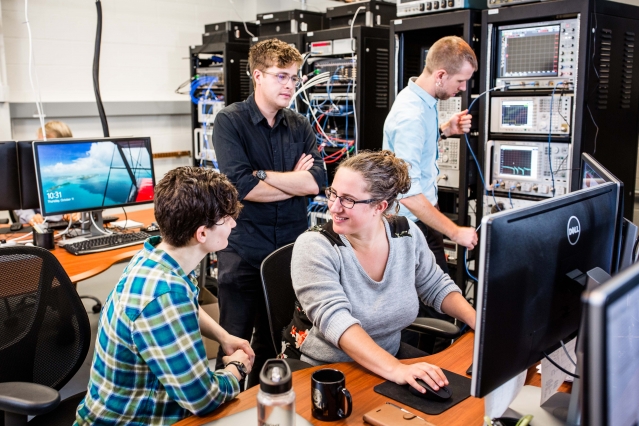 William Oliver says government research funding will have to be augmented with commercialization of quantum computing, and that will require trained scientists and engineers. Photo: Nathan Fiske

A: Quantum computing is transitioning from theory to practice, and there is a growing number of government programs supporting quantum information processing: The EU has a flagship, China has a substantial effort, as do England, Australia, Singapore, Canada, Sweden, Finland, and many more. The U.S. Congress recently passed the National Quantum Initiative, authorizing more than $1.2 billion investment in quantum science and technology over the next five to 10 years. With all of these initiatives, there’s a large increase in the number of positions in academia, government, and industry. It’s definitely an employee’s market right now.

Companies are also jumping in. If you’re a blue-chip hardware or software corporation, and you want to be competitive in quantum computing in the future, then you’ve got to be in the game right now. It’s no surprise, for example, that Intel is a leader today in electronic computer chip manufacturing, because Intel and its early employees were there from the very beginning. Quantum is not the kind of technology that can simply be copied; it’s different. Even if you’re not a “pure technology” company, you likely have a business model that depends on some of the areas that quantum will impact, such as optimization problems. Many companies also have encrypted data that they need to keep secure. The concern is not just how companies will keep their data secure in a future with quantum computers, but how the data they encrypt today will remain secure for decades to come.

Q: How is quantum computing talent being developed today?

A: Most of the people that we’d call quantum scientists and engineers are basically jacks-of-all trades who have been educated as physicists or engineers. But at some point they got interested in quantum and, basically, the engineers learned some physics and the physicists learned some engineering. Before a new technology goes mainstream, you don’t necessarily have academic disciplines that target that specific technology. That’s where we are now with quantum.

At MIT, we’re working to address this very question: How do we define what quantum engineering is? In my opinion, quantum engineering bridges both science and engineering. We want to ensure that MIT is synonymous with quantum engineering. We need to write the textbooks, develop its foundation and curricula. On the talent supply side of quantum, we’re training more and more people. We may eventually need to define a new academic discipline. It’ll probably start at the graduate level and with professional development courses, such as the MIT xPRO series I’m co-teaching. We’ll also likely see a gradual emergence of courses oriented toward quantum engineering in the undergraduate curriculum.

Q: What is the impact of the talent shortage?

A: As with many advanced technologies, there’s good and there’s bad, but with quantum in particular, there are both tremendous opportunities and some serious national security concerns. We need well-trained personnel entering both government and industry careers. Competition for talent between government and companies naturally leads to higher salaries for people with knowledge of quantum.

What can be done to close the talent gap? MIT xPRO is addressing the reality that on-campus students aren’t the only people interested in learning about quantum information. We need to educate engineers and physicists who are already in the workforce and have to pivot. There’s a huge talent pool within industry and government today. As companies get into these new areas, they’re shifting people over. The same pivot is happening in the US government and in government-funded laboratories, as we’ve done at Lincoln Lab. MIT xPRO’s focus is to help people make that pivot, and to provide a sufficient foundation from which they can self-learn.

Q: How do you view the promise of quantum computing?

A: The promise of quantum can be broken down into three fundamental areas. The holy grail is a universal quantum computer, one that can run any algorithm just as computers today can run any algorithm. This requires a universal set of quantum gates that can perform arbitrary quantum logic. And, there are a number of specific applications where a quantum computer can vastly outperform a classical computer. This holy grail will take at least 10-20 years to realize. That’s the type of computer than can perform cryptanalysis, such as break RSA, and perform very sophisticated simulations.

The second type of computer is a quantum simulator. What that does is simulate computationally-intensive materials properties or chemical reaction rates, for example. There are a number of important applications there where we just can not obtain good answers using today’s classical computers. Of course, we simplify the problems to the point where our classical computers can handle them, but then the answers get fuzzy. A good example is nitrogen fixation, a process used to create ammonia. Ammonia is used in fertilizers, and it’s estimated that about 1 to 2 percent of all energy usage worldwide goes into making ammonia. But we know that bacteria can do it with what their metabolism affords them, which is certainly not high temperature or high pressure. But the enzyme that catalyzes the nitrogen fixation is so large that its simply not feasible to simulate it precisely on a classical computer. If we could build a quantum computer large enough to do this simulation, get the reaction rates of that molecule and understand how bacteria can do it, then we’d presumably be able to develop an industrial process that’s much more energy efficient.

Another example is optimization. Optimization problems can be performed using either a universal quantum computer, a quantum simulator, or a quantum annealer. Quantum annealing is a different type of quantum computer, and whether it can achieve quantum advantage is not yet known. Unlike the first two, the quantum annealer may just be a faster classical computer. Developing either an annealing quantum optimizer or a simulator-based quantum optimizer are the nearest term applications that we’ll see. The hope is that we can answer those types of problems on the quantum computers we’ll have in the next five years.

Q: What are the challenges to developing the necessary talent?

A: For quantum to succeed and ultimately lead to a second information processing revolution, we need commercialization to kick in. The U.S. government alone is simply not going to be able to fund this at the level that’s needed to commercialize this technology over the long term. The government has an important role to seed this work, but then industry has to carry it forward, commercialize it, generate revenue, and use that revenue to develop a better product next year. And, for this to occur, we need to train tomorrow’s quantum engineers.