The collaborative effort of researchers from Skoltech, SB RAS Nikolaev Institute of Inorganic Chemistry, and RAS Institute for Problems of Chemical Physics translated into the development of advanced lead-free semiconductors for solar cells, based on complex antimony and bismuth halides. The results of their study were published in the Journal of Materials Chemistry A and showcased on the journal’s cover page. 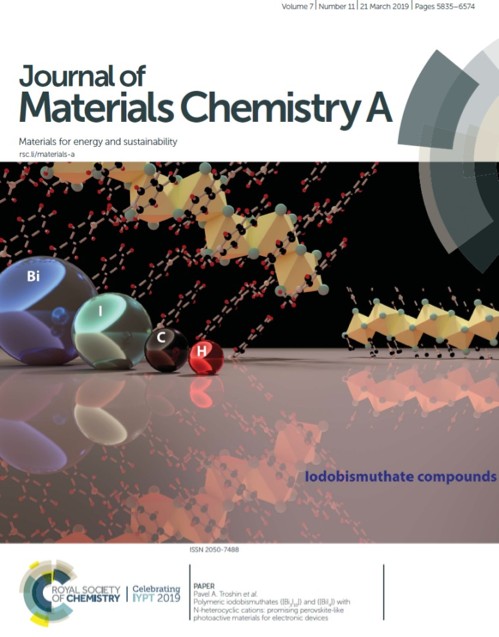 The solar cells, which are based on complex lead halides with a perovskite-type structure, are coming into sharp focus thanks to their low cost, ease of manufacturing and enhanced light-conversion efficiency of >24%. However, their mass production and wider use are hampered by toxicity and the low stability of complex lead halides. To overcome these obstacles, researchers worldwide are working on designing alternative lead-free photoactive materials, in particular ones that are based on bismuth and antimony halides. So far these solar cells have displayed poor light-conversion performance, which suggests that the charge carriers are not generated efficiently enough in the photoactive layer or have difficulty reaching the electrodes.

The team of researchers from Skoltech, SB RAS Nikolaev Institute of Inorganic Chemistry, and RAS Institute for Problems of Chemical Physics showed that the actual reason behind this is the non-optimal structure of the bismuth and antimony compounds.

“We found out that unhindered vertical transport of holes and electrons, which is essential for efficient operation of solar cells, is prevented by the low dimensionality of the anionic sublattice in these compounds, which is typically 0D and sometimes 1D or very rarely 2D. As a consequence, this class of materials can work efficiently in lateral photodetectors but not in solar cells,” explains professor Pavel Troshin of the Skoltech Center for Energy Science and Technology.

Earlier, the same team suggested increasing the lattice dimensionality in bismuth and antimony complexes by introducing linker molecules, such as molecular iodine. Using this approach, which was presented in Chemistry: A European Journal, the scientists have succeeded in creating new semiconductor materials based on complex halides of bismuth and antimony with iodine, which are currently the subject of intensive research worldwide.

The same team has also designed a fundamentally new family of solar cell materials based on the perovskite-like complex antimony bromides, ASbBr6 (where A is a positively charged organic ion). The ASbBr6-based solar cells have exhibited record-high light-conversion efficiency for antimony and bismuth halides. The results of this study were published in the journal Advanced Energy Materials. According to the project leader, Pavel Troshin, a real breakthrough in their research came with this study, opening up new horizons in the development of new semiconductor materials for perovskite electronics.