A group of researchers from Skoltech, the Institute for Problems of Chemical Physics of RAS, and N.D. Zelinsky Institute of Organic Chemistry of RAS, led by Skoltech Professor P.A. Troshin, has discovered a relationship between the structure of photochromic molecules and electrical characteristics of memory devices built using these compounds. Their findings open new opportunities for the rational design of new functional materials for organic electronics. The results of their study were published in the Journal of Materials Chemistry С and featured on its cover page. 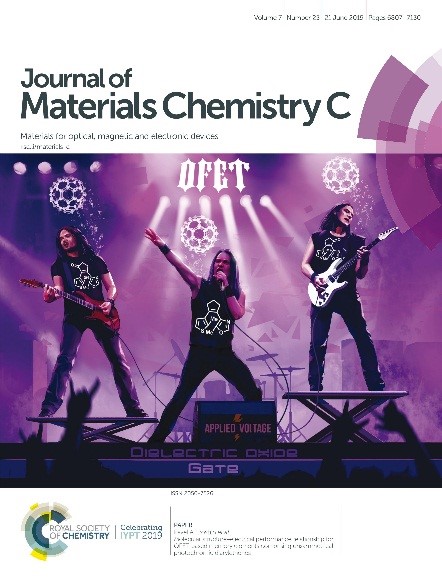 Organic electronics has been developing at a blistering pace over the last decade. Flexible thin-film electronic circuits, sensors, displays, solar light converters and batteries, LEDs and other components have already found valuable applications in product packaging (smart packaging), clothes (wearable electronics, electronic textile), electronic skin, robotics and prosthetics, and particularly in smart prosthetic limbs and exoskeletons that are sensitive to touch, pressure, heat and cold. Further advancement of organic electronics should result in the creation of a functional interface between the classical “solid-state” electronics and live objects, such as the human body. The Smart Healthcare concept, enabling continuous monitoring of the human condition and its timely adjustment in response to the first signs of a disease, is believed to be having a game-changing impact on healthcare. The focus will be on prevention rather than treatment at the advanced stage of a disease when the vast arsenal of treatment methods is not enough to save a patient or improve the quality of life.

Practical applications of organic electronics require that all of its functional components, including organic memory elements, are fully developed. From this perspective, of particular interest are the photochromic compounds, whose molecules, by nature, are single-bit memory cells that undergo reversible isomerization between two quasi-stable states when exposed to light (similarly to “0” and “1” in the binary system.) Unfortunately, the current lack of technical capability makes it almost impossible to reliably switch a single molecule and register its state. This means that photochromic molecules need to be integrated into more complex and larger systems, where the transition from one state to another will produce a response that can be captured; for example, as an electrical signal.

Earlier, Professor Troshin’s team developed the structure of organic field-effect transistors with a photosensitive photochromic layer and demonstrated the possibility of their optolectrical switching between multiple electrical states. However, the effect of the photochromic material structure and properties on the device electrical characteristics has been unclear until now. In their recent study, the researchers from Skoltech, the Institute of Problems of Chemical Physics, RAS, and N.D. Zelinsky Institute of Organic Chemistry, RAS, have succeeded in identifying the relationships between the structure of photochromic materials and their electrical performance in devices.

“We studied three different photochromic materials of similar structure in optical memory elements based on organic field-effect transistors and found some meaningful patterns following a detailed analysis of the characteristics, such as the switching speed and amplitude, memory window width, and operating stability in the multiple data write-read-erase mode. We showed that having a carbonyl group in the photochromic dihetarylethene bridge moiety makes the switching easier, while reducing the stability of induced states. In contrast, a photochromic compound with an unsubstituted propylene bridge and a relatively narrow memory window ensures reliable switching and long-term device stability. The correlations that we found between the molecular structure of photochromic compounds and the electrical characteristics of the devices made using these materials provide a solid background for the rational development of a new generation of materials for organic memory elements and photodetectors,” says the first author of the study Dolgor Dashitsyrenova.