Scientists from the Skoltech Center for Photonics and Quantum Materials (CPQM) have developed a novel method to fine-tune the optoelectrical properties of single-walled carbon nanotubes (SWCNT) by applying an aerosolized dopant solution onto their surface, thus opening up new avenues for SWCNT application in optoelectronics. The results of their study were published in The Journal of Physical Chemistry Letters.

This year has witnessed the appearance on the market of foldable and bendable screens, bolstering the development of unique materials and paving the way for the next generation of products of virtually all shapes and sizes. Transparent conductive films (TCF) made using an advanced solution, SWCNT, are seen as the key element of flexible and transparent electronics. As opposed to the customary n-type transparent rigid conductors, such as tin-doped indium oxide or aluminum-doped zinc oxide, the flexible and stretchable SWCNT films have p-type (hole-type) conductivity. However, poor control over SWCNT’s electronic properties is the main hindrance for their broad industrial use. This is particularly true for optoelectronic applications, which often require efficient control over conductivity and Fermi levels, amongst other things.

Carbon nanotubes are commonly treated with a doping agent. 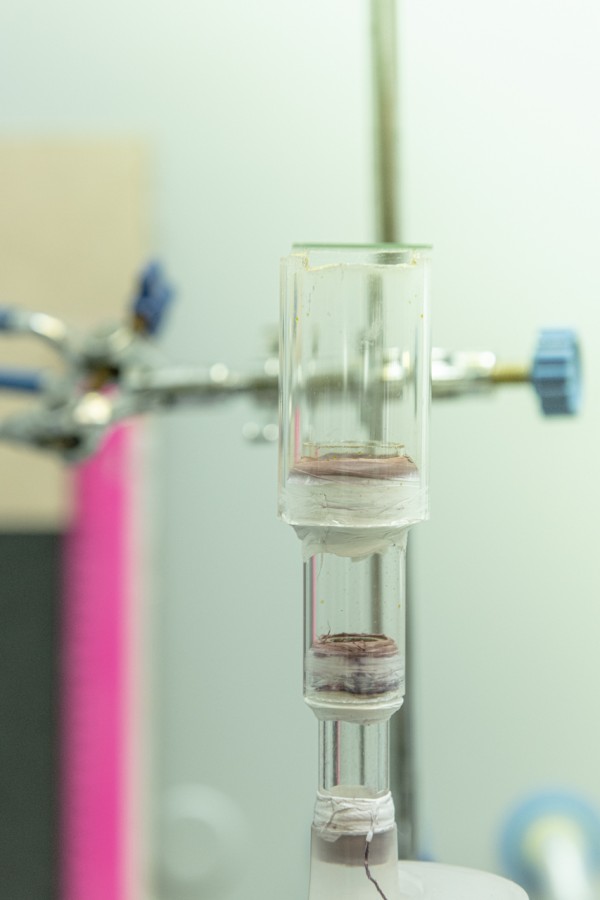 “SWCNT conductivity is enhanced using one of the three most common doping methods: drop-casting, spin-coating or dip-coating, which can significantly decrease the resistance of pristine SWCNT films (up to 15 times) but fail to ensure spatial uniformity and have poor scalability. This leads to non-uniform evaporation of the liquid solvent, resulting in a coffee-ring effect. Moreover, none of these techniques enable precise control over the Fermi level in the SWCNT films,” explains Skoltech PhD student, Alexey Tsapenko.

Scientists from the Skoltech lab directed by Professor Albert Nasibulin developed a new approach ensuring uniform, controllable and easily reproducible aerosol doping of SWCNT. The performances obtained with the new method break new ground, prompting the replacement of the currently prevalent rigid transparent metal-oxide conductors by flexible and transparent electronics, and the creation of new applications based on highly conductive transparent films.

The researchers involved in the project note that the new fine-tuning approach developed specifically for carbon nanotubes can be applied for electronic structures of other low-dimensional materials.