An international team of scientists led by researchers from the Laboratory of Nanomaterials at the Skoltech Center for Photonics and Quantum Materials (CPQM) has shown that the nonlinear optical response of carbon nanotubes can be controlled by electrochemical gating.  This approach  enabled designing a device for controlling the laser pulse duration. The results of the study were published in the prestigious international journal Nano Letters.

Optical phenomena that we encounter in our everyday life, such as reflection, refraction or absorption of light, do not depend on the intensity of incident light. However, at very high radiation intensities, a new class of phenomena arises, that causes changes in the refraction index, self-focusing of light or emergence of radiation at new wavelengths. These and other phenomena that are dependent on the intensity of light are studied by a section of physics called nonlinear optics. Normally, the efficiency of nonlinear optical response is material’s invariable characteristic determined by its structure. 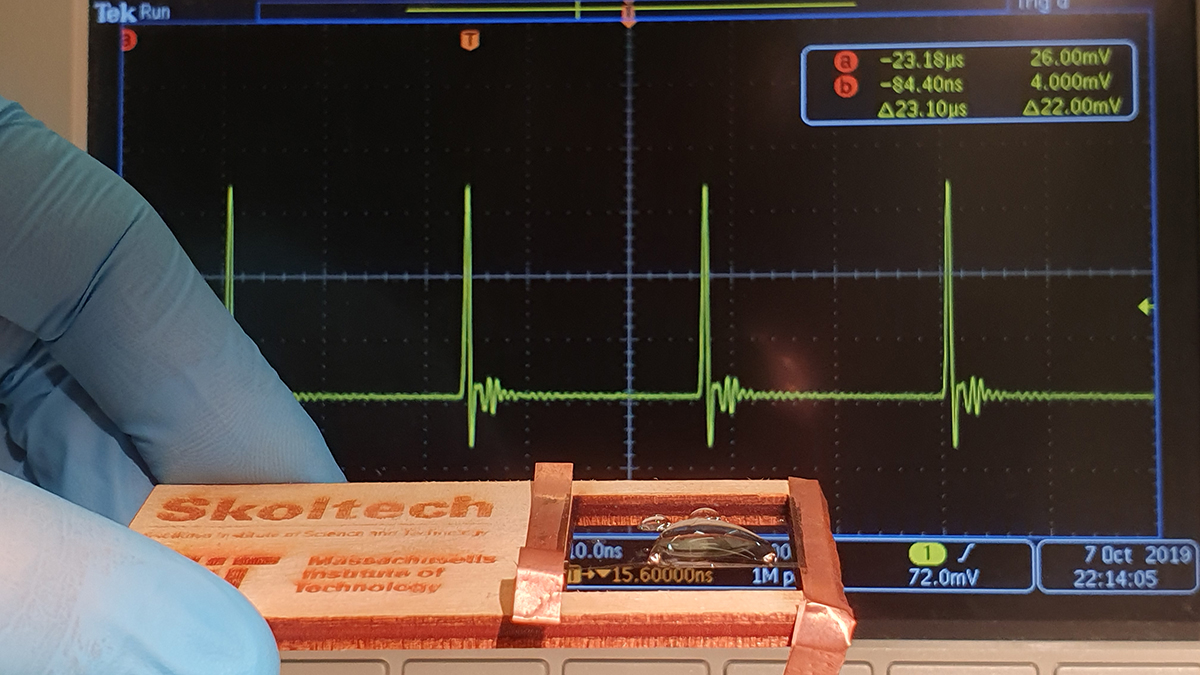 Using nanomaterials as an optical nonlinear medium opens up new perspectives for nonlinearity control thanks to the fact that the majority of its atoms are exposed to the surface. This enables controlling a material’s electronic structure and thus changing its nonlinear optical response.

Skoltech scientists in collaboration with their colleagues from the Fiber Optics Research Center of RAS, Novosibirsk State University and the University of Warwick (UK) have proposed a method for controlling the saturable absorption of carbon nanotubes using electrochemical gating. Saturable absorption is a nonlinear optical effect when the absorption coefficient decreases with increasing power of incident light. Thus, the material gets more transparent under intense laser radiation. “We showed that magnitude of the nonlinear transparency can be controlled by placing the material in an electrochemical cell. It has been known that, if placed in the electrochemical cell, nanotubes can accumulate a considerable amount of electrical charge on their surface. What has not been known thus far is that the charge accumulation leads to a significant change in the material’s nonlinear optical response and, in particular, a reduction in saturable absorption,” says the first author of the study and Senior Research Scientist at Skoltech, Yuriy Gladush.

Also, the authors have looked into one of the potential practical applications of a material with a controlled nonlinear response. Saturable absorption is widely used in laser systems to generate femtosecond light pulses. All you have to do is place a saturable absorber with given parameters in the laser cavity. “We assumed that the laser generation regime can be controlled by adjusting the material’s nonlinear response. To do so, we built an electrochemical cell with carbon nanotubes placed on the optical fiber surface and integrated it into the fiber optic laser cavity. We discovered that by applying voltage to the device, one can switch from continuous laser generation regime to pulsed regime in the femtosecond and microsecond ranges. This invention paves the way for universal laser systems with a controllable pulse duration that can be used in laser processing of materials, laser surgery, and aesthetic medicine,” explains Albert Nasibulin, Head of Skoltech’s Laboratory of Nanomaterials and Professor of RAS.