On September 30, the Chinese Friendship Award ceremony was held in the Great Hall of the National Assembly of China. The winners included Professor at the Skolkovo Institute of Science and Technology (Skoltech) and Professor of RAS, Artem Oganov, who received the prestigious award from Mr. Liu He, Member of the Central Politburo of the Communist Party of China and Vice Premier of the State Council of China. The ceremony was held in celebration of the 70th anniversary of the People’s Republic of China.

A founder and head of Kaspersky Lab, Evgeny Kaspersky, is one of the previous Russian winners of the Award. This year, the only Russian winners are Professor at Skoltech and Professor of RAS, Artem Oganov, and Full Member of RAS, Vladimir Pavlyushin (St. Petersburg.) 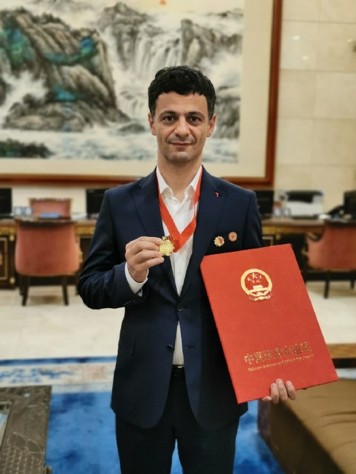 The ceremony was followed by a meeting with Premier of the State Council of China Li Keqiang and a gala dinner with the attendance of President of China Xi Jinping.
Professor Oganov was invited to participate in the drafting and implementation of China’s “National Medium and Long-Term Science and Technology Development Plan till 2035”.

Artem Oganov is a professor and Head of the Computational Materials Design Laboratory at Skoltech and Professor of RAS, a winner of the megagrant of the Government of the Russian Federation, and a 1000-Talents Professor (China).