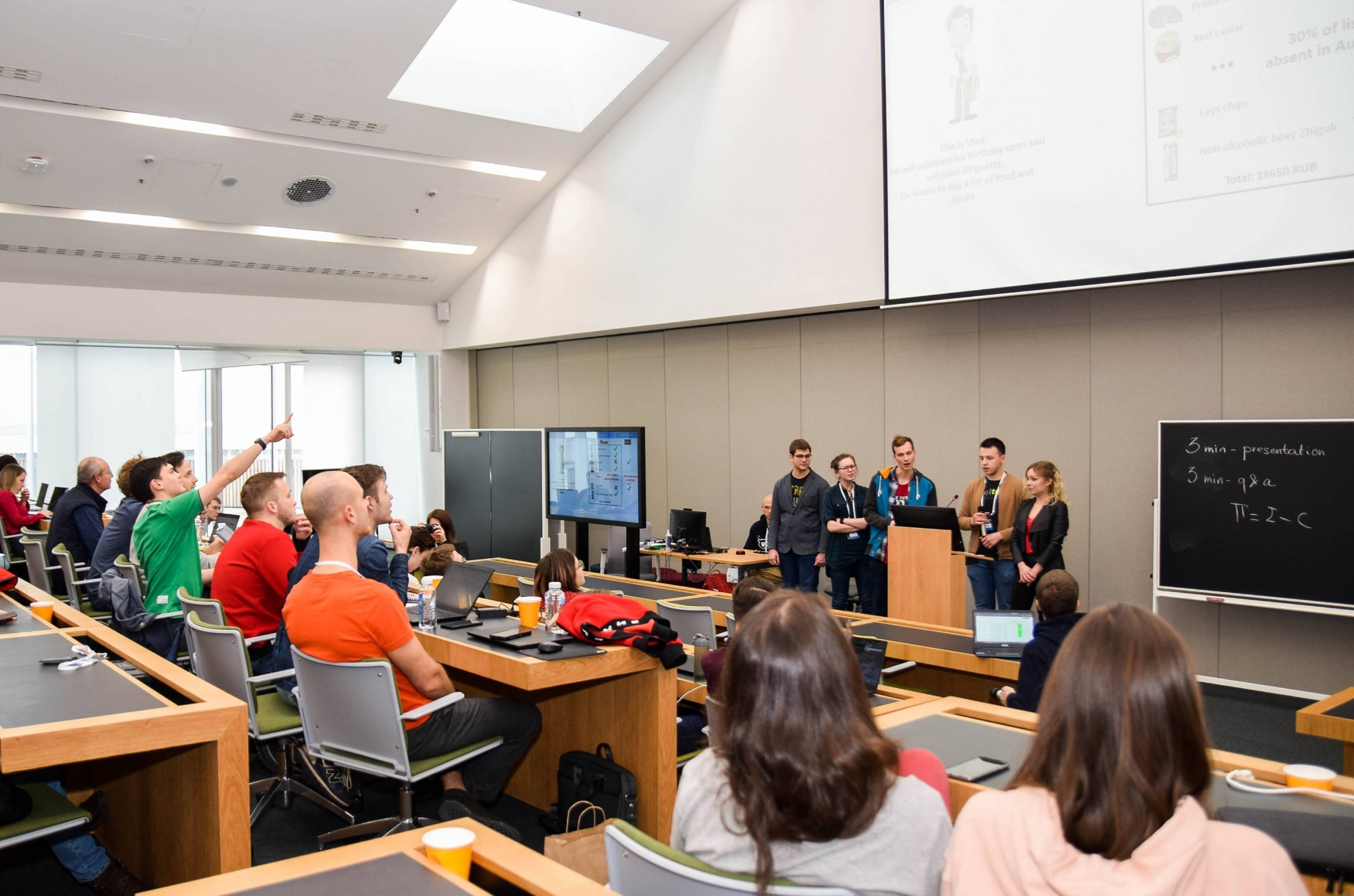 Extracting Value from Data: the McKinsey Challenge, (aka the McKinsey Hackathon), was a big event in the Independent Studies Program (ISP) and a great opportunity for Skoltech students to put themselves on the map in working to find a solution to a major real-world business problem.

This hackathon was a grueling 24-hour competition in which 70 students divided into 14 groups worked to fix a problem that Sbermarket, a major player in the online retail market, faces day to day. The company’s own team is experimenting with different approaches for how to solve the issue, and they have turned to Skoltech’s best students to get new ideas and test their own thinking.

The Hackathon was initiated by Assistant Professor Zeljko Tekic (Skoltech Center for Entrepreneurship and Innovation) and organized in close collaboration with Skoltech’s recent graduate Aleksey Marakhin, who is currently with Phystech.Genisis. 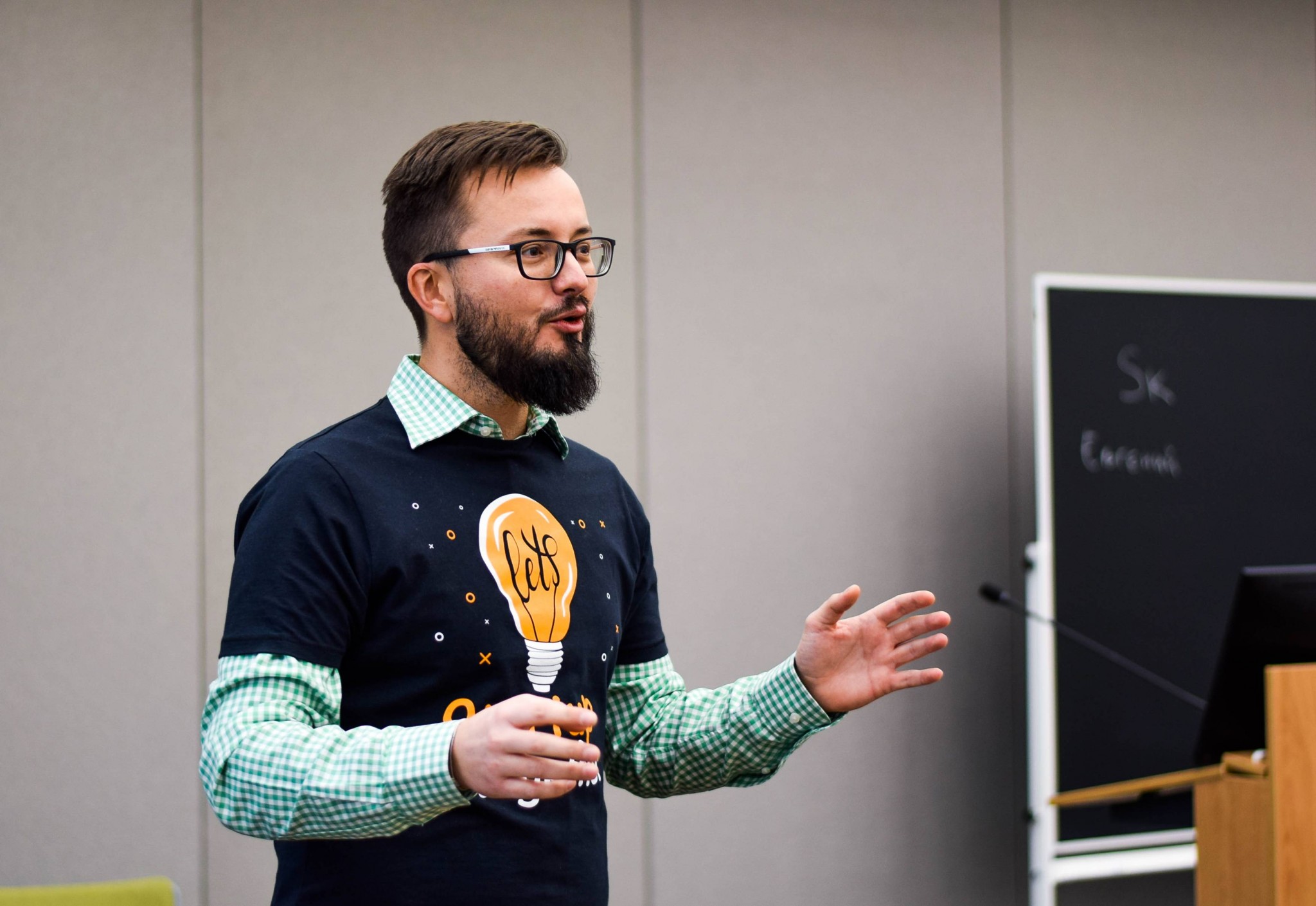 Professor Tekic explained the motivation behind the course’s creation:

“In today’s digital world, data is the most important source of value, while a company’s ability to successfully manage data is a key measure of whether or not a company will remain relevant through the digital revolution. Thus, understanding and practicing how to extract value from data is one of the most important new knowledge domains. In this ISP course, I partnered with McKinsey & Company, Sbermarket and Phystech.Genisis to help students learn exactly this, through team and hands-on work that is both inspiring and fun.”

Sbermarket does home deliveries of goods from shops such as Auchan, Lenta, Azbuka Vkusa, VkusVill, and Metro. Once a customer places an order through the Sbermarket webpage, which displays what products are available at the stores, a Sbermarket shopper goes to the store and buys the list of groceries.

The problem is with outdated information. Products on the company website that are displayed as “available” may in fact be out of stock. This is because stores only share their stock data with Sbermarket each morning.

This is also a problem for other companies abroad with a similar business model. Within the Russian market itself, three of Sbermarket’s competitors went bust at the beginning of this year because of this issue. The company’s availability forecasting model had been providing moderate results, so Sbermarket was searching for improvements. 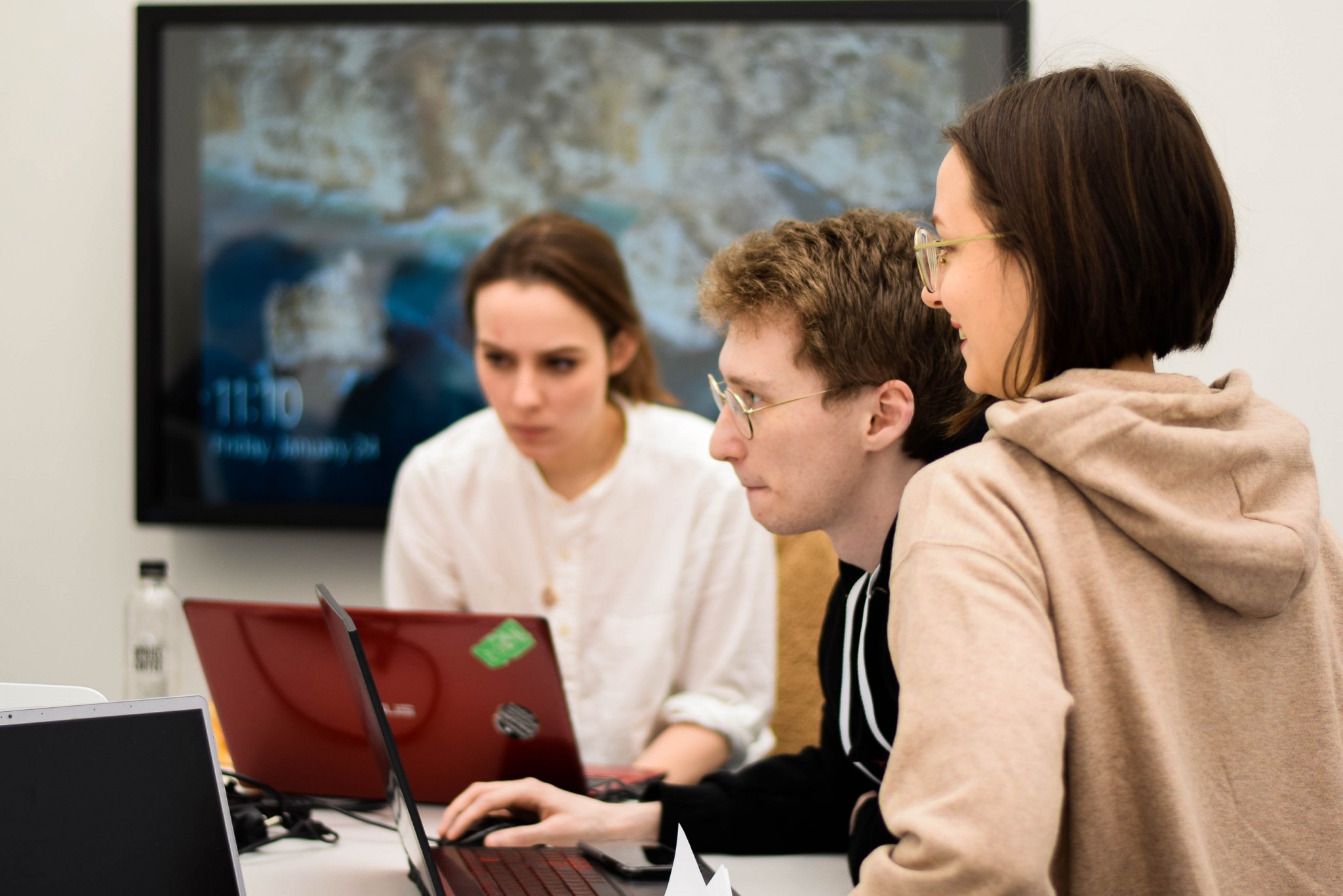 And, Skoltech students accepted the challenge. They were inspired by the fact that the problem and data came from the real market, and that experts’ support was available all the time.

Anton Voronov, one of the participants, told us: “The problem was very interesting, because it’s a common and real business task. Also, the data was nicely organized.” Emil Zakirov, another student who took part in the hackathon, added: “Kaggle competition made it easy to understand how well your solution performs and to compare it to other solutions in real time”. Sofya Dymchenko highlighted continuous support participants got from mentors: “It was very useful to have a possibility to be mentored by McKinsey, Sbermarket and Phystech.Genesys guys throughout the hackathon”.

The solutions that Skoltech students proposed contained two parts, one part relating to data science and the other to business.

In the data science section, they used machine learning algorithms such as CatBoost, XGBoost and combined them, adjusting parameters of the algorithms to maximize the selected quality metrics. In the business section, which was of equal importance to Sbermarket, most participants considered three ways to implement a solution: 1) show items as “out-of-stock” 2) remove products from the search list 3) replace products with analogs. Some teams conducted cohort analysis and considered additional features such as “loyalty.” They estimated Sbermarket’s possible income by applying different methods and selecting the best one.

Andrey Oblupin from team 404 Found explained what his team did: “We implemented a prediction service, proposed an auto replace button for goods (if they are out of stock), suggested giving people the option to leave a comment for any particular listing, and offered alternatives based on the prediction.” 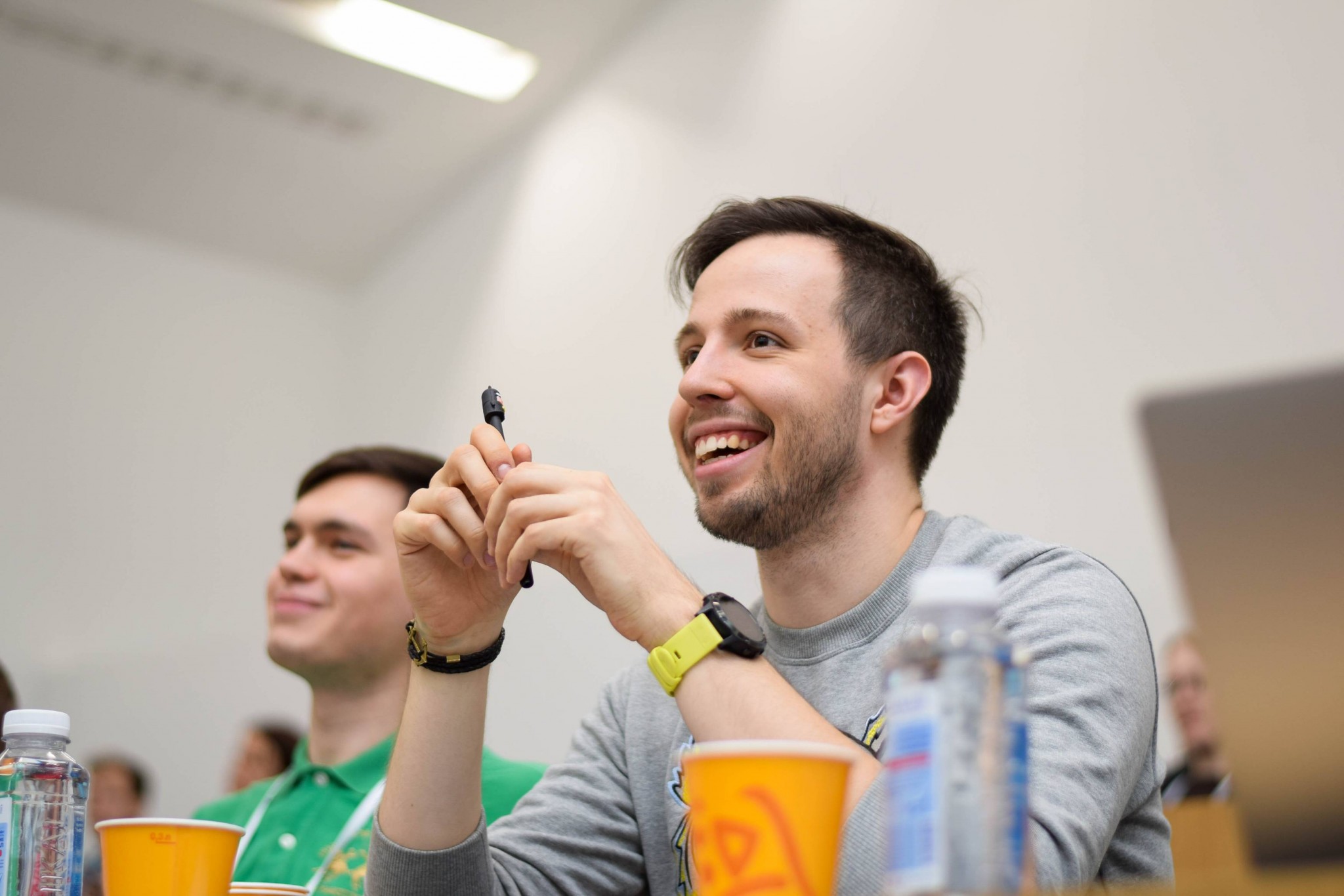 Dmitry Zborovskiy, the Data & Growth Director of Sbermarket, placed a high value on the proposed solutions and clarified why the hackathon was a success for Sbermarket: “We successfully validated our initial hypotheses regarding operational / product implementation. In addition, we have increased the quality of our prediction model after evaluating the prizewinners’ models.”

Apart from improving their programming and business skills throughout the challenge, students learned several other important lessons.

“I learned two very important things through this hackathon,” said Andrey. “No teams will develop exactly the same solution, and one team cannot achieve more than two teams working together. This came at the end of the competition and we tried to combine our solution with that of another team. The result was a huge advancement in our prediction model!

Sofya, who was part of winning AtlantRasparsilFichi team, highlighted teamwork: “Teammates are very important, but managing team well is even more important. And, it is very nice feeling to win!”

However, Aleksandr Pletnev learned perhaps the most important lesson, which is about the importance of ethics and integrity. “During the final presentation, early on we noticed an error in the calculations of the impact of the model. We could have said, ‘this is not an error, this a feature,’ which would have been to pretend that our calculations are correct. Instead, we decided to admit to the error, explaining why it happened and how it influenced the solution. Because of that, I felt that our chances of a good result were lost as well as the credibility of all the other slides, calculations and conclusions. Yet, imagine our surprise when we found ourselves among the winners! Moreover, we were given bonus points because of our integrity and honesty. I guess this is a perfect example for all of us as to why it is essential to always be honest and never fall into a lie in professional life.”

Saturday morning, January 25, and the teams presented their solutions before a panel of judges from McKinsey, Skoltech, Sbermarket, and Phystech.Genisis.

The winners were as follows: 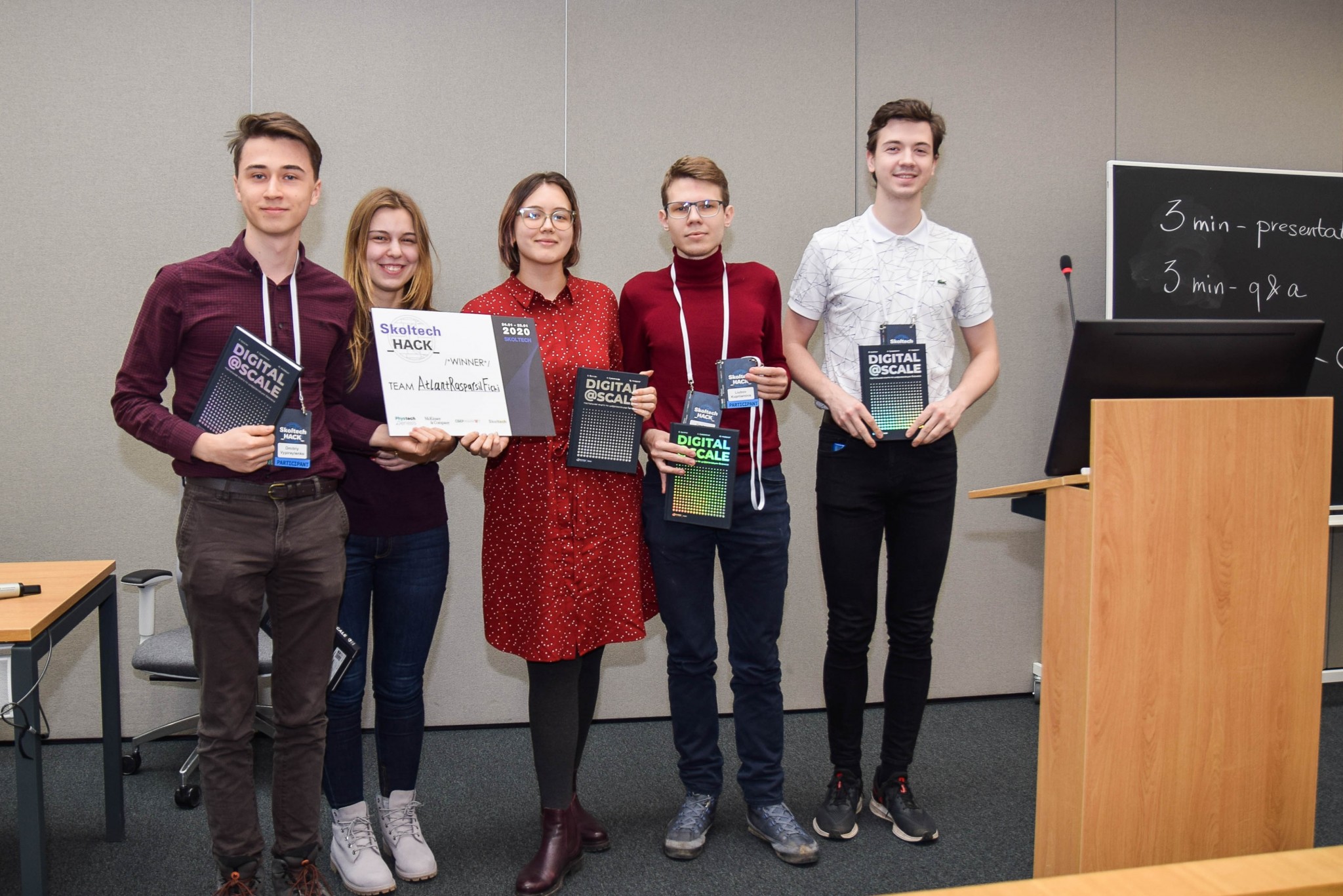 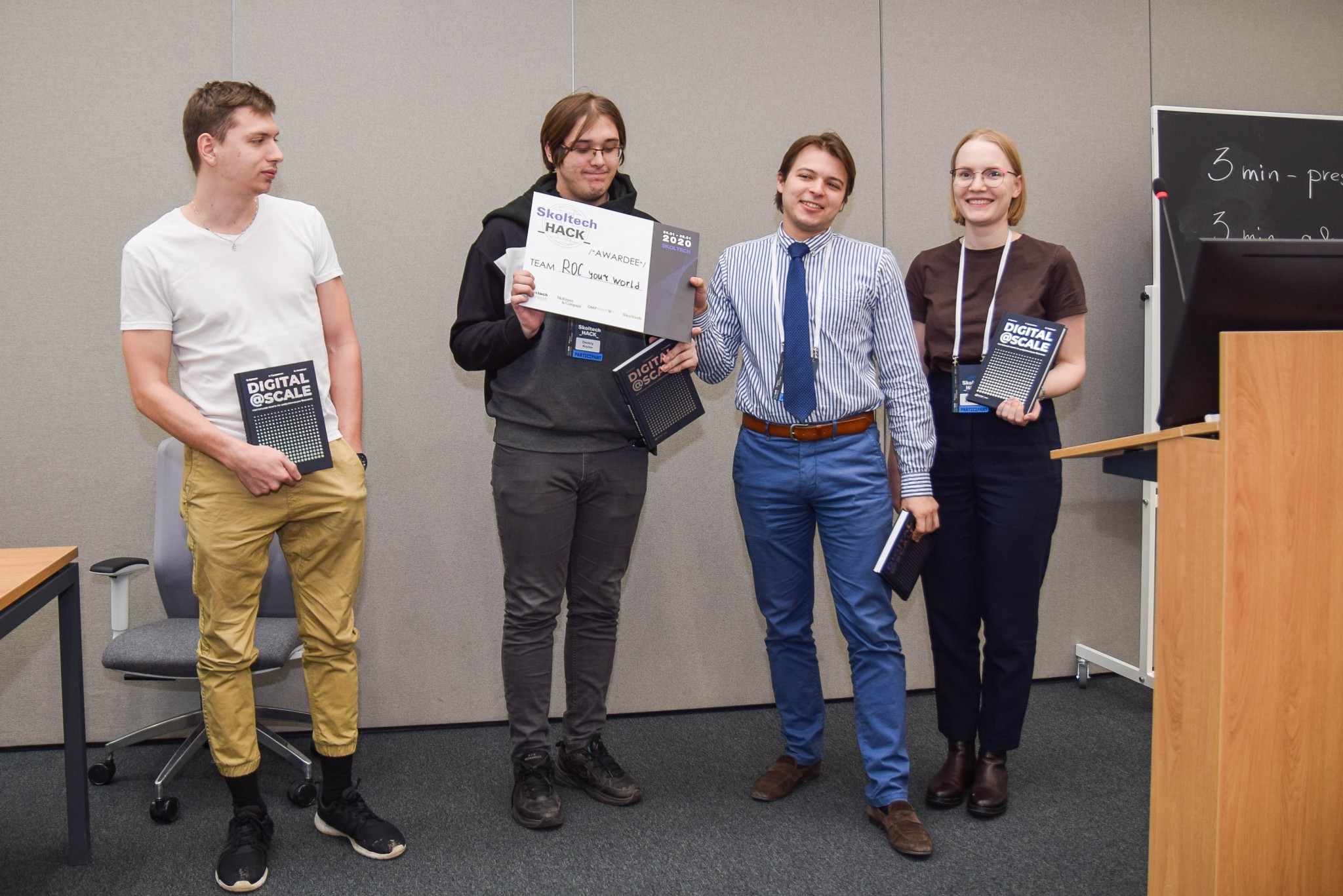 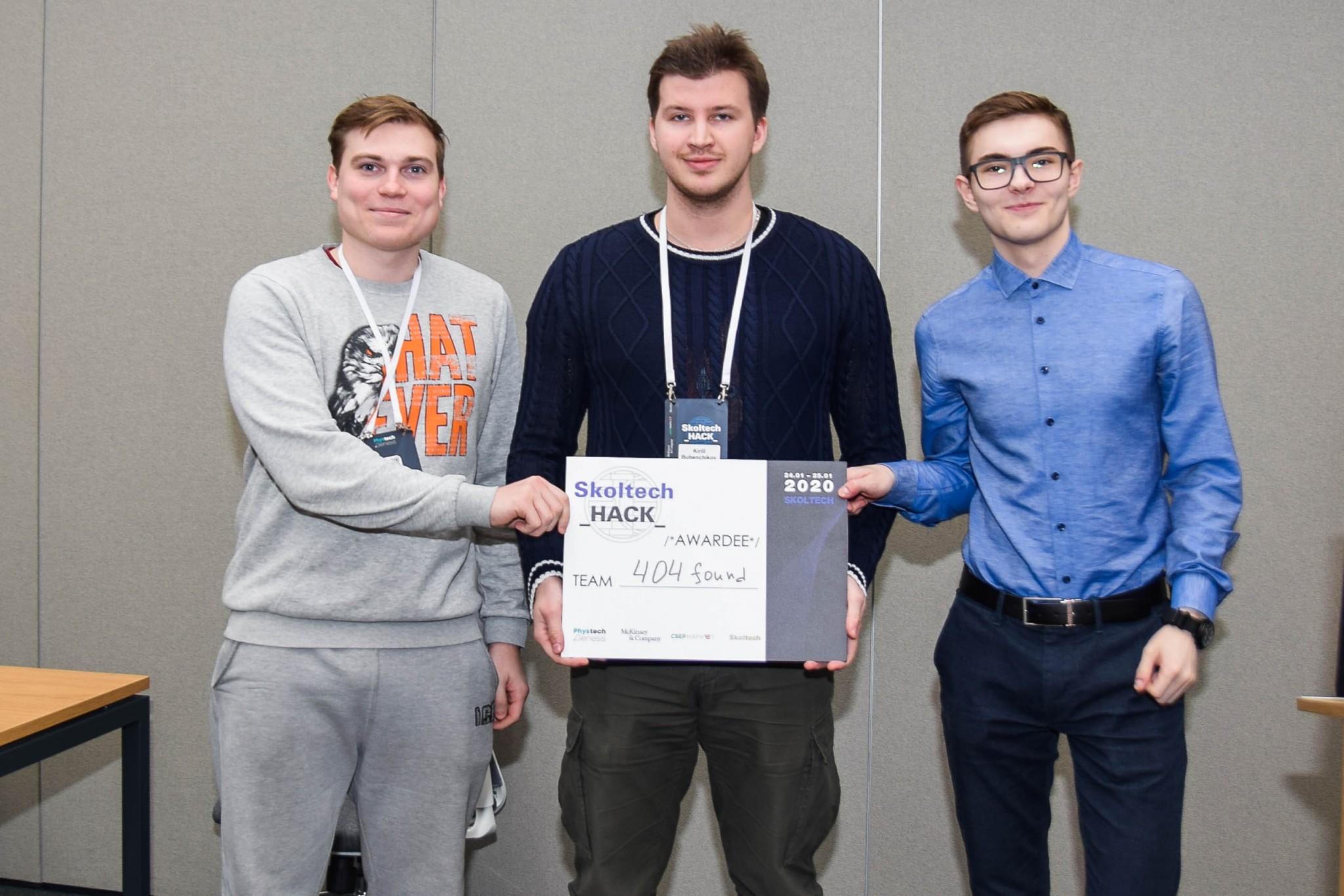 The organization of the event was rated highly by students. “The organization was on a top level.” told us Emil. “I’ve been at couple of hackathons before and can compare. I don’t remember anything that bothered me during that day. So, zero complaints.”

The McKinsey Challenge is a great opportunity for Skoltech students to combine their knowledge in solving a current, real-life problem, which is a rare chance for most people their age. In providing a solution that could save a big market player from bankruptcy, they are setting themselves up for a promising future career!

Sbermarket’s Dmitry Zborovskiy who, together with several other experts from Sbermarket and McKinsey, spent many hours at Skoltech on that Friday and Saturday mentoring our students, offered a nice summary: “I was truly impressed by the dedication of these students! I was standing in front of a brainstorm room and, from literally every corner, teams were loudly discussing their models. Every wall was completely covered with charts and formulas. It felt amazing! In addition, of course, I’m very happy that Skoltech offers such opportunities to its students. I think it is the best way to get hands on experience while studying.”