In their search for new superhard compounds, researchers carried out a prediction of stable molybdenum borides and their crystal structures. They revealed that the highest borides contain four to five boron atoms per each molybdenum atom. The estimated Vickers hardness of MoB5 is 37–39 GPa, which makes it a potential superhard material. The study supported by Russian Science Foundation was published in The Journal of Physical Chemistry Letters.

Earlier, a group of researchers led by Artem Oganov, professor at Skoltech and MIPT, published a study in the Journal of Applied Physics, in which they compiled a list of hard and superhard materials that may have many industrial applications. This list, made using the evolutionary algoritm USPEX and new model of Vickers hardness (pressure required to leave a pyramid-shaped indentation in the material) and fracture toughness (ability of a material to resist propagation of a fracture), was dubbed a “treasure map” for experimenters by its authors. 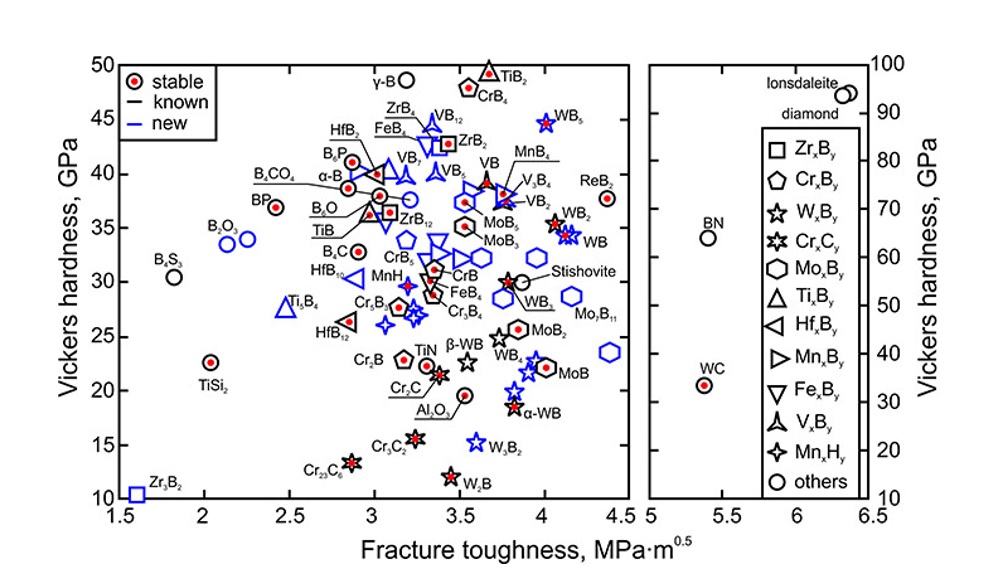 High valence electron density of the metal atoms resists compression (due to electrons starting to repel each other) and covalent boron–boron and boron–metal bonds resist elastic and plastic deformations.

“The simulated X-Ray diffraction (XRD) patterns are usually compared to the one suggested in the experiment in order to determine whether the predicted structure is compatible with the experimental one. However, considering transition metal borides, such as molybdenum borides, the XRD pattern will only show signals from the heavier atoms while positions of the light boron atoms will be essentially invisible. This is why crystal structure models built based only on experimental data are often unrealistic and unstable. Therefore, a comprehensive approach to determining crystal structures requires state-of-the-art theoretical calculations,” says Alexander Kvashnin, one of the authors and a senior research fellow at Skoltech and MIPT.

Molybdenum pentaboride MoB5 was found to be the stable highest boride, however the simulated XRD patterns were close but not identical to the experimental data. The predicted pentaboride had a few weak peaks that were not observed in the experiments. This hinted towards a higher symmetry in the experimental sample. Key structural elements of the new compound are boron atoms arranged in graphene-like layers, molybdenum layers, and triangles of boron atoms. Boron and molybdenum atoms are arranged in alternating layers with some Mo atoms replaced with B3 triangles spread evenly throughout the crystal’s volume.

“We made a hypothesis that the structure of the highest boride is disordered and boron triangles statistically replace molybdenum atoms. In order to prove that, we developed a lattice model that enabled us to define the rules that governed how the boron units should position themselves to achieve the lowest energy,” says Dmitry Rybkovskiy, research fellow at Skoltech and A. M. Prokhorov General Physics Institute and the first author of the work.

The brute force search for the positions of molybdenum atoms and boron triangles, sampling different variants, allowed the researchers to reveal the patterns related to stability. Stable phases contain four to five boron atoms per one metal atom, and MoB4.7 is the most stable of such compounds and gives the best match to the experimental XRD pattern.

“This study is an interesting example of interaction between theory and experiment. Theory predicted a compound that demonstrates peculiar properties and new structure but the experiment suggested that the actual material is more complex and its structure is partially disordered. The theory we formulated based on these findings allowed us to reproduce all experimental observations and understand the exact composition and structure of this material, as well as its detailed properties. In particular, the calculated hardness is close to the range of superhard materials,’ said Artem Oganov, professor at Skoltech and MIPT, and the leader of the team of authors.

Superhard materials have a wide range of industrial applications, such as machine tool building, jewelry, or mining. They are used in cutting, polishing, grinding, drilling, so the search for new superhard compounds is an important task.