The search for coveted high-temperature superconductors is going to get easier with a new ‘law within a law’ discovered by Skoltech and MIPT researchers and their colleagues, who figured out a link between an element’s position in the Periodic Table and its potential to form a high-temperature superconducting hydride. The new paper is published in the journal Current Opinion in Solid State & Materials Science. The research was supported by the Russian Science Foundation.

Superconducting materials, with zero resistance and thus no dissipation of energy to heat, would be extremely useful for our electronics and power grids. Superconducting magnets are already used in the MRI machine at your local hospital and in particle accelerators such as the Large Hadron Collider at CERN. 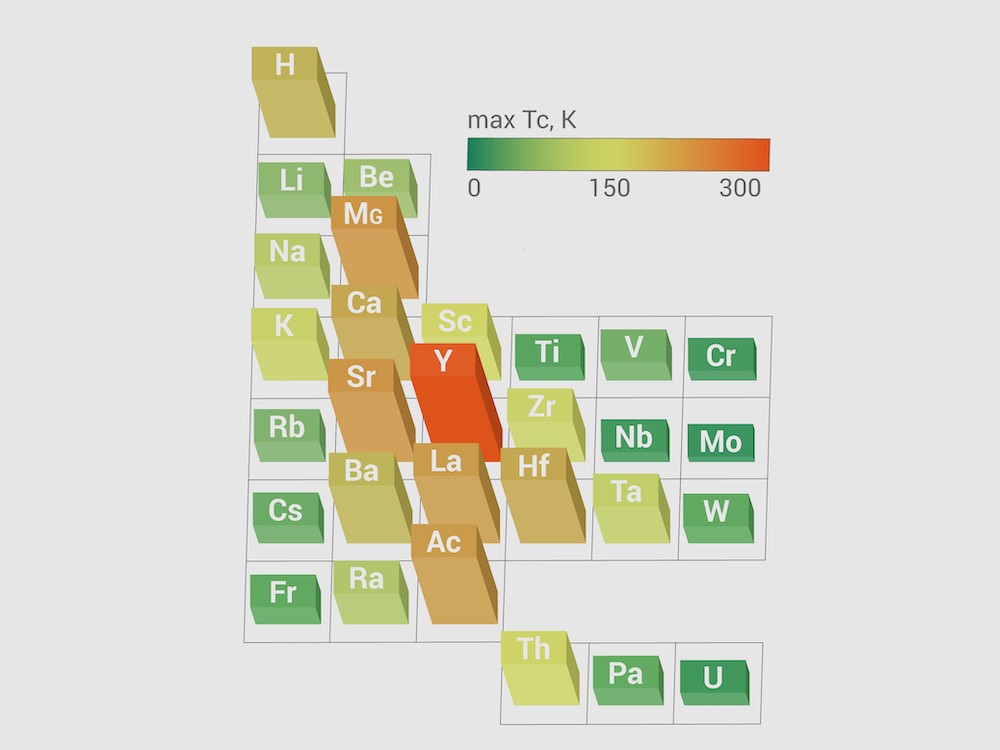 Right now there are two ways to get to superconductivity, both at the extremes: very low temperatures or very high pressures. Some of the “warmest” superconductors of the first kind, cuprates, still require to be cooled down to some 100 K (-173 °C), which is a far cry from normal conditions. There are predictions that metallic hydrogen can show superconducting properties at almost room temperature; the catch is in the pressure required, which is more than 4 million atmospheres, almost at the limit of our technical capabilities.

That is why scientists are looking at hydrides, compounds of hydrogen and another element, and it has been shown that they work as superconductors at relatively high temperatures and lower pressures. The current record of up to minus 23 °C was shown last year for LaH10, lanthanum decahydride, at the pressure of 170 gigapascals, or 1.7 million atmospheres. Even though pressures are still too high to enable practical use, research in superconducting hydrides already has important implications for other classes of superconductors, which could function at normal pressure and temperature.

Skoltech PhD student Dmitrii Semenok and Skoltech and MIPT Professor Artem R. Oganov together with their colleagues have found a rule that allows predicting the maximum superconducting critical temperature, maxTC, for a metal hydride based only on the electronic structure of metal atoms. This means that the search for new superconducting hydrides is going to get easier.

“The connection between superconductivity and the Periodic Table was puzzling at first. We are still not fully certain about its origin, but we think that it is because elements at the boundary between s- and p- or s- and d-elements (roughly between 2nd and 3rd groups of the Table) have electronic structure unusually sensitive to the crystal field, and this is perfect for the electron-phonon coupling, which is the cause of superconductivity in hydrides”, said Artem R. Oganov, a co-author of the work.

In addition to discovering a qualitative rule, they also trained a neural network to predict maxTC for compounds where no experimental or theoretical data was available. For some elements, previously published data on Tc of hydrides seemed to deviate from regular behavior. The researchers then set out to check these data by using USPEX, the evolutionary algorithm developed by Oganov and his students for predicting thermodynamically stable hydrides of these elements.

“For elements where the published values of maxTc were (based on the discovered rule) too low or too high, the group performed systematic searches for stable hydrides. Their new data confirmed the discovered rule and yielded new hydrides for magnesium (Mg), strontium (Sr), barium (Ba), cesium (Cs) and rubidium (Rb). For instance, a predicted strontium hexahydride, SrH6, has a maxTC of 189 K (minus 84C) at 100 GPa, while BaH12, a theoretical barium superhydride, may have a relatively high maxTC  up to 214 K (minus 59C).”, said Alexander Kvashnin, Skoltech and MIPT senior research scientist and a co-author of the research.

Earlier in 2019, Oganov and his colleagues from Russia, the US and China synthesized cerium superhydride CeH9, which has superconducting properties at 100-110 K and at a (relatively) low pressure of 120 GPa. Another superconductor discovered by the research group (Dmitry Semenok, Ivan Troyan, Alexander Kvashnin, Artem R. Oganov, and their colleagues), thorium hydride ThH10, has a high critical temperature of 161 K.

“Now, using the newly discovered rule and the neural network we can focus on more complex compounds which are even more promising in our quest for room-temperature superconductivity – ternary superhydrides that contain two elements and hydrogen. We have already predicted a number of hydrides that can rival or exceed LaH10”, said the first author of the work, Dmitrii Semenok.

Other organizations involved in this research include the Dukhov Research Institute of Automatics (VNIIA) and the Research Computer Center of Lomonosov Moscow State University.