Skoltech researchers and their colleagues have shown that LATP, a solid electrolytes considered for use in next-generation energy storage, is highly sensitive to water, which has direct implications for potential battery performance and lifetime. The paper was published in the journal Chemistry of Materials.

Although renewable energy sources attract much interest all over the world due to green technologies and high conversion efficiency, their integration remains a challenge as renewables are inherently cyclic and inconsistent. As night follows day and calm follows wind, the idle mode follows power generation. Evidently, such an unpredictably intermittent power supply will hardly meet consumers’ expectations, but there is a solution that can overcome this obstacle, namely energy storage grids. These systems are expected to collect spontaneously generated energy and then distribute it on-demand, providing stable and flexible power delivery. 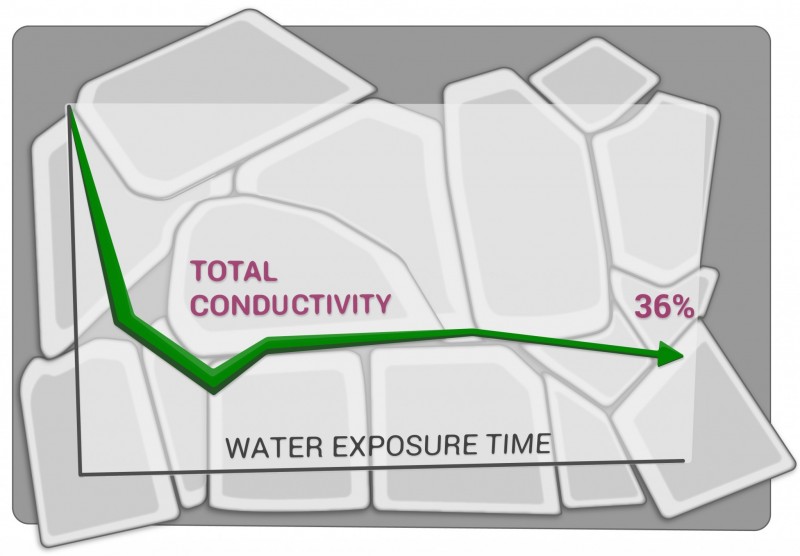 Among the wide range of energy storage systems, redox-flow batteries seem to be the most appropriate due to easy scalability, operation, and controllable output power. A redox flow battery is, in a way, a conventional battery turned inside out: electrodes become liquids (anolyte and catholyte) while the ion-conductive electrolyte becomes a solid membrane. The properties of this membrane determine final performance and lifetime of the battery, so scientists are considering various materials, both inorganic and polymeric, that would be suitable for this purpose.

One of these compounds is Li1.3Al0.3Ti1.7(PO4)3, or LATP. It is a well-known lithium conductive material belonging to the NASICON-family (named after the first well-described sodium-conductive representatives — Na Super Ionic CONductor). This family is defined by a similar crystal structure that determines its high ionic conductivity.

LATP conductivity and structural features are described quite thoroughly, yet its stability towards ordinary environmental factors, such as air and water, remains poorly understood. So Mariam Pogosova of the Skoltech Center for Energy Science and Technology and her colleagues decided to find out whether pure water influences LATP properties.

“LATP triggered our scientific curiosity. A well-known superionic conductor, LATP has a high potential for further chemical and technological improvement. We knew its limitations, such as poor mechanical properties (brittleness) and instability towards metallic lithium. However, these limitations were quite acceptable as we planned to compensate them through the creation of composite material. So, we started our experiments,” Pogosova explains.

Earlier studies by the group showed that LATP ceramics were losing conductivity rather drastically when stored for several days in both ambient air and argon. The researchers hypothesized that humidity might play a key role in this degradation and set out to explore LATP exposure to water.

First, the scientists synthesized LATP through the original two-stage solid-state reaction. They then put their samples in deionized water and left for different periods of time up to 12 hours and conducted subsequent electrochemical, structural, chemical, morphological analyses supported by theoretical modeling.

The experiments showed that LATP ceramics degrade significantly in contact with the water, losing up to 64% in total ionic conductivity after approximately two hours of exposure. The scientists also observed a bunch of other evidence of degradation: microcracking, grain’s shape distortion, formation of nanoparticles, chemical composition shifts, unit cell shrinkage, and intrastructural polyhedra and strain changes. All of this led them to conclude that LATP ceramics are highly sensitive to water and probably unsuitable for use in aqueous redox flow batteries.

“Evidently, the impact of water is a concern for pure LATPs and their suitability for redox-flow systems, especially aqueous ones. I want to stress that the deionized water/LATP system analyzed in this study doesn’t represent the real redox-flow battery conditions, as the anolyte/catholyte solutions are more complex. Therefore, at this point, I wouldn’t try to predict the future of LATP. Nevertheless, I believe the fundamental knowledge obtained is already valuable and applicable: any kind of water is now clearly a reason to be on the alert. For example, now we can preserve the initial performance of LATP ceramics through a simple drying-and-vacuum treatment,” Mariam Pogosova says.

She also notes that, surprisingly, their research is the first thorough and versatile study of water impact on LATP. “So we are surely planning more studies in order to refine LATP behavior in other media, to reveal whether it is going to perform well under redox-flow conditions”, Pogosova adds.