Researchers from the Skoltech Center for Design, Manufacturing and Materials (CDMM) proposed using sulfonimide-based dendrimers to make one-molecule thick films and actually created such protective water-repellent film from the new material that can be modified to achieve other desired surface properties. Their findings were published in the journal, Applied Surface Science. 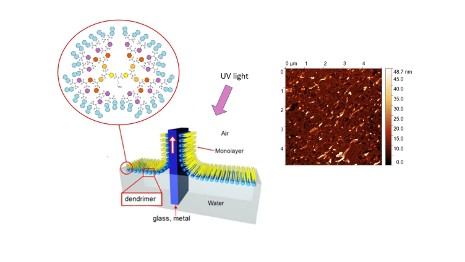 Rapid advancement of new materials spurs the need for advanced surface protection and modification techniques. Scientists are busy looking for ways to extend the materials’ service life and create new useful features while keeping their natural properties intact. Thus far, polymers have typically been used for this purpose. However, using polymers alongside other kinds of protection can alter the material’s natural properties, such as transparency, conductivity or hardness. A promising line of research would be to create thin monomolecular layers that can endow a surface with useful properties without affecting the material’s intrinsic characteristics, and dendrimers rank among potential candidates for monolayers.

“Dendrimers are unique molecules with a highly-ordered homogeneous monodisperse structure and high-level tree-like branching, that measure at least 1 nm and have a strictly defined molecular weight,” says Julia Bondareva, a PhD student at Skoltech. The synthesis and research into the properties of sulfonimide-based dendrimers was initiated by Oleg Lukin, a senior research scientist at Skoltech. His investigations prompted the idea of ​​using dendrimers for functional surface coatings. Earlier, a CDMM research group led by Oleg Lukin had published a paper on the synthesis of sulfonamide-based naphthyl-decorated dendrimers in Synthetic Communications. As the naphthyl groups along with the long alkyl chains make the molecule hydrophobic, the scientists decided to create water-repellent film based on the structures they had obtained previously.

There are many ways to create and apply films on a surface, but few enable controlling the film thickness. The scientists used the well-known Langmuir-Blodgett technique to obtain ultrathin film with an ordered structure and apply it to the surface. “It transpired that the dendrimer’s naphthyl group not only controls the film’s hydrophobic properties but also enables the additional bonding of the dendrimer molecules to form a dense and stable film,” Julia Bondareva explains.

Interestingly, the study revealed that the surface wettability depends on the film roughness. Further investigations should enable predicting the dendrimer film wettability based on the spatial arrangement of hydrophobic functional groups. This will be a big step forward in the dendrimer synthesis planning and implementation.