Researchers from Skoltech and their colleagues spent more than two years studying a 20-meter wide and 20-meter deep crater in the Yamal Peninsula in northern Russia that formed after an explosive release of gas, mostly methane, from the permafrost. They were able to deduce potential formation models for the discovered crater that has implications for geocryology and climate change studies. Two papers outlining the results of this project, supported by Total, were published (1, 2) in the journal Geosciences.

Permafrost, which amounts to two thirds of the Russian territory, is a huge natural reservoir of methane, a potent greenhouse gas. As the Arctic warms and permafrost degrades due to climate change, scientists are concerned that this methane may start leaking into the atmosphere in massive amounts, further exacerbating global warming.

Right now methane is already quietly seeping from underground in the Arctic, but sometimes it does more than just that: a giant 40-meter wide alien-looking crater, dubbed the “Yamal Crater”, captured everyone’s imagination in 2014 when it was found just 42 kilometers from the Bovanenkovo gas field. Explosive events like this produce impressive “scars”, but scientists are still not sure where the gas that causes them comes from. 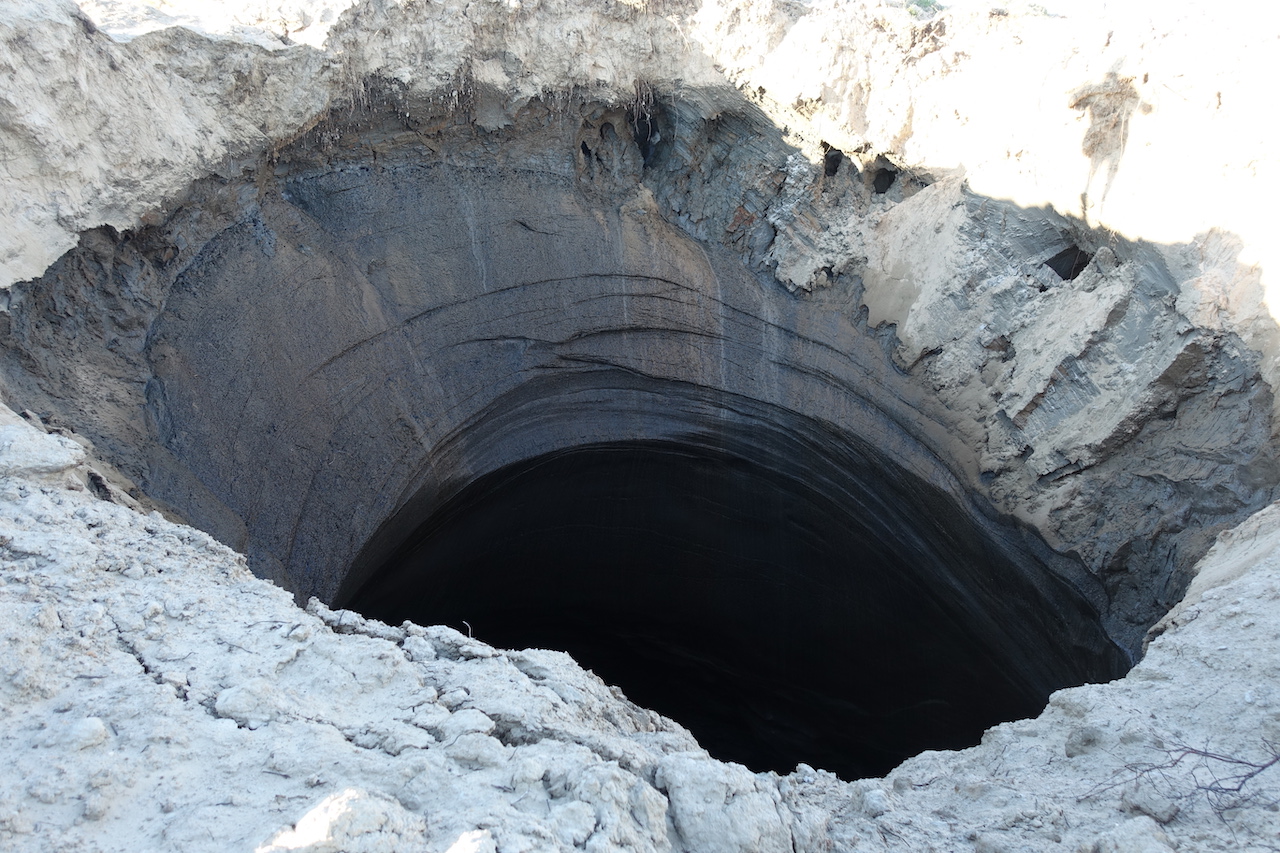 “Arctic craters are relatively rare phenomena that mostly occur in the remote tundra. The frost heaving that precedes a crater usually happens quite quickly, over one to two years, and this sudden growth is hard to observe, so almost all craters were discovered after everything had already happened. We have only piecemeal evidence from locals who say they heard a noise or saw smoke and flames. Plus, a crater turns into a lake in another one to two years, which is then hard to distinguish from common thermokarst lakes in the Arctic,” says Evgeny Chuvilin of the Skoltech Center for Hydrocarbon Recovery, the paper’s first author.

The Skoltech team decided to study the Erkuta gas-emission crater, accidentally discovered in the summer of 2017 in the floodplain of the Erkuta-Yakha River on the Yamal Peninsula by biologists interested in falcon nesting-places in the area. According to Dr Chuvilin, the Skoltech team was lucky to get to the much less famous Erkuta crater during its first year — and just one year before it too turned into a lake. Thus, theirs is probably the only team in the world who got to look into the origins of the Erkuta crater.

The researchers took samples of permafrost soil, ground ice and water from the rim of the crater during a field trip in December 2017 and conducted drone observations six months later. They found that the strongly negative δ13C (a measure of the ratio of stable carbon isotopes 13C to 12C) of methane from ground ice samples was characteristic of biogenic hydrocarbons, yet the ratio of methane to the total amount of its homologs, ethane and propane, pointed to a deeper thermogenic source.

Based on these observations, the scientists built a model for the formation of the crater, which “matured” in one of the dried-up lakes that formed from an oxbow lake, a former paleo-channel of the Erkuta–Yakha River. This lake probably had a underlake talik— a zone of unfrozen soils that started freezing gradually after the lake had dried out, building up the stress that was ultimately released in a powerful explosion.

“Cryovolcanism, as some researchers call it, is a very poorly studied and described process in the cryosphere, an explosion involving rocks, ice, water and gases that leaves behind a crater. It is a potential threat to human activity in the Arctic, and we need to thoroughly study how gases, especially methane, are accumulated in the top layers of the permafrost and which conditions can cause the situation to go extreme. These methane emissions also contribute to the rising concentrations of greenhouse gases in the atmosphere, and climate change itself might be a factor in increasing cryovolcanism. But this is still something that needs to be researched,” Chuvilin notes.