Skoltech researchers and their colleagues from Aalto University have discovered that electrochemical doping with ionic liquid can significantly enhance the optical and electrical properties of transparent conductors made of single-walled carbon nanotube films. The results were published in the journal Carbon.

A single-walled carbon nanotube (SWCNT) is a seamless rolled sheet of graphene, a list of graphite that is one atom thick. Just as other new carbon allotropes, SWCNTs demonstrate unique properties which can be employed in novel electronic devices that we use in our everyday life. One of the most promising applications is transparent conductors, which can be useful in medicine, green energy, and other fields: here, SWCNT films can replace the industrial standard indium-tin oxide (ITO). They are highly conductive, flexible, stretchable and can be easy doped due to the fact that all atoms in the nanotube are located on its surface. 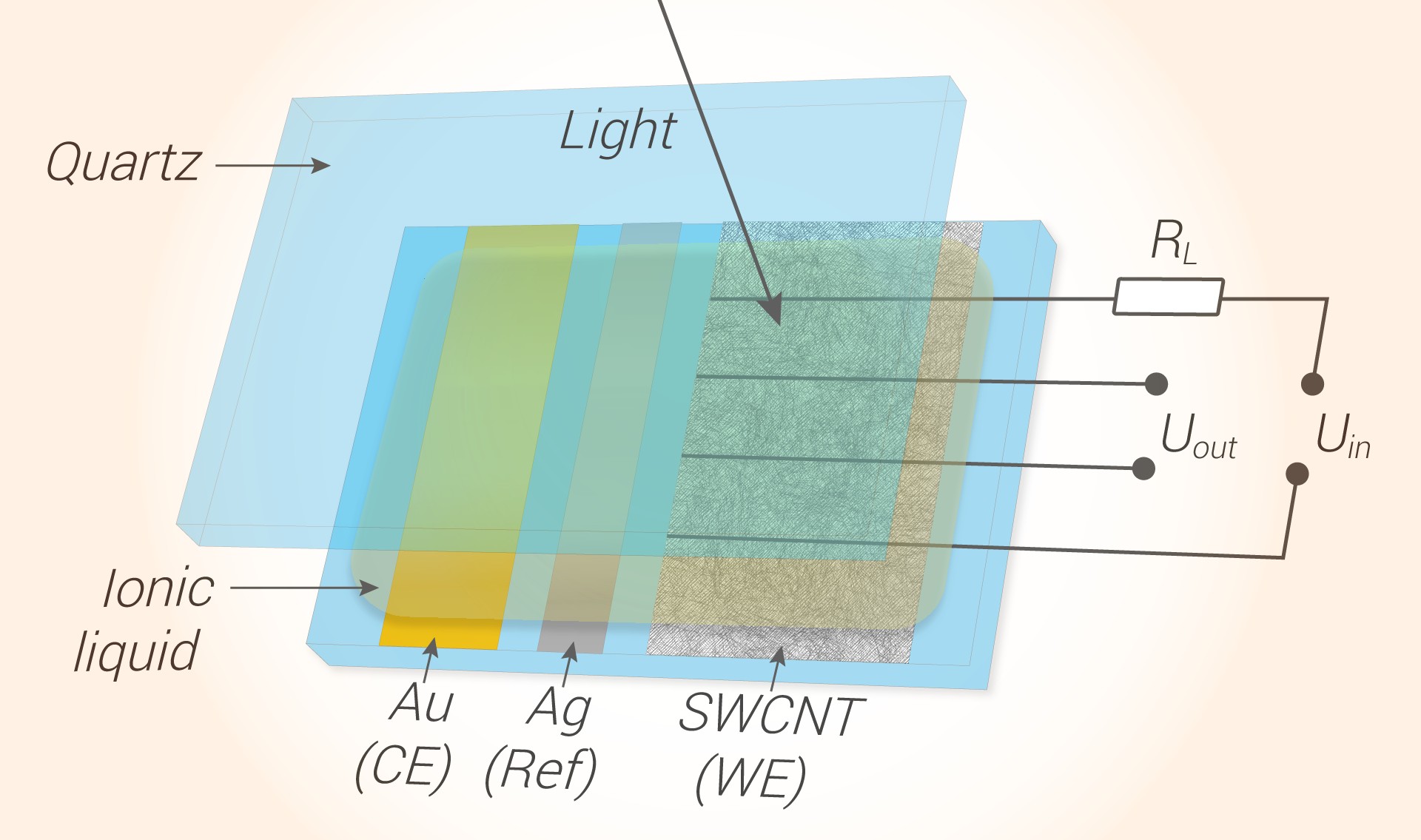 An outline of the experiment. Credit: Pavel Odinev / Skoltech

Doping of SWCNTs allows to significantly increase film conductivity by eliminating the Schottky barriers between the tubes with different nature and increase the concentration of charge carriers. Moreover, the doping process leads to an increase in the transmittance of the films due to supersession of optical transitions.

While adsorption doping remains one of the most promising techniques for SWCNT modification, this method lacks uniformity and reversibility. In the new study, researchers propose a new reversible method to fine-tune the Fermi level of SWCNTs, dramatically increasing the conductivity while the optical transitions are suppressed. For this, they used electrochemical doping with an ionic liquid with a large potential window, which facilitates a high level of doping.

“We placed the SWCNT thin film into electrochemical cell and used standard three electrode scheme to apply potential to the nanotubes. With applying the negative/positive potential to the SWCNT film, an electrical double layer is formed at the SWCNT/ionic liquid interface. The latter acts as parallel plate capacitor causing positive/negative charge injection to SWCNT film surface and consequently the Fermi level shift,” explains Daria Kopylova, the first author of the study and senior research scientist at Skoltech.

The scientists were able to show that their electrochemical method can help achieve extremely high doping levels, comparable to the best results for doped SWCNTs films recently published in the field.

“The process is fully reversible so that it can be used to fine-tune the electronic structure of the single-walled carbon nanotubes in real time. Operating with the gate voltage, you can drive both optical transmittance and electrical conductivity of the films. The results open new avenues for future electronics, electrochromic devices, and ionotronics,” says Albert Nasibulin, head of Laboratory of Nanomaterials at the Skoltech Center for Photonics and Quantum Materials.