Skoltech scientists in collaboration with researchers from the University of Stuttgart showed that the concentration of short-lived ions (H3O+ and OH-) in pure liquid water is much higher than that assumed to evaluate the pH, hence significantly changing our understanding of the dynamical structure of water. The results are published in Scientific Reports. 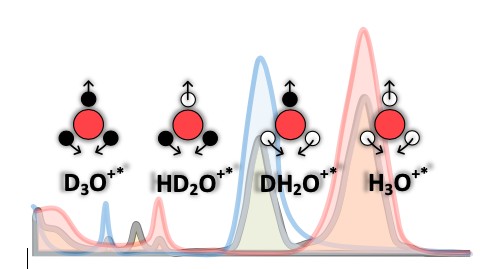 Intrinsic ionic species of liquid water play an important role in the redox processes, catalytic reactions and electrochemical systems. A low-barrier tunneling of hydrogen atom between the H2O molecules, caused by nuclear quantum effects, is expected to generate short-lived excess proton states. However, to date, there has been no information on the concentration of such excess protons states in pure water.

Skoltech scientists in collaboration with German researchers measured the ion-molecular composition of liquid water on the sub-picosecond time scale. The result surprised scientists as they observed that up to several percent of H2O molecules were temporarily ionized.

“We used water isotopologues: ordinary (H2O), heavy (D2O), and semi-heavy (HDO) water, to identify excess-proton states. By gradually substituting the hydrogen atoms (H) with deuterium (D), we changed the relative concentration of excess-proton-related species, such as HD2O+, DH2O+, H3O+ and D3O+, and identified their contributions to the cumulative infrared absorption. We found concentration-dependent spectral features near molecular bending modes of semi-heavy water spectra that no known model was able to explain. We associated these features with excess protons that may be expected to exist on the picosecond time scale,” said one of the co-authors, Prof. Henni Ouerdane from the Skoltech Center for Energy Science and Technology (CEST).

“While previous studies of water structure were based on crystallographic experiments, and did not reflect the dynamics of water, our research brings new insights into the intricate water structure at ultra-short time scale. The finding anticipates new effects of electric field interaction with water, as well as other anomalous properties of water,” concluded the lead author, Dr. Vasily Artemov, Senior Research Scientist at CEST.