Skoltech researchers together with their industrial colleagues and academic partners have cracked a 1960s puzzle about the crystal structure of a superhard tungsten boride that can be extremely useful in various industrial applications, including drilling technology. The research, supported by Gazpromneft Science & Technology Center, was published in the journal Advanced Science.

Tungsten borides first captured the imagination of scientists in mid-twentieth century due to their hardness and other fascinating mechanical properties. One long-standing puzzle has been the crystal structure of the highest W-B phases, the so-called “WB4”, which varied wildly between experimental models and theoretical predictions. 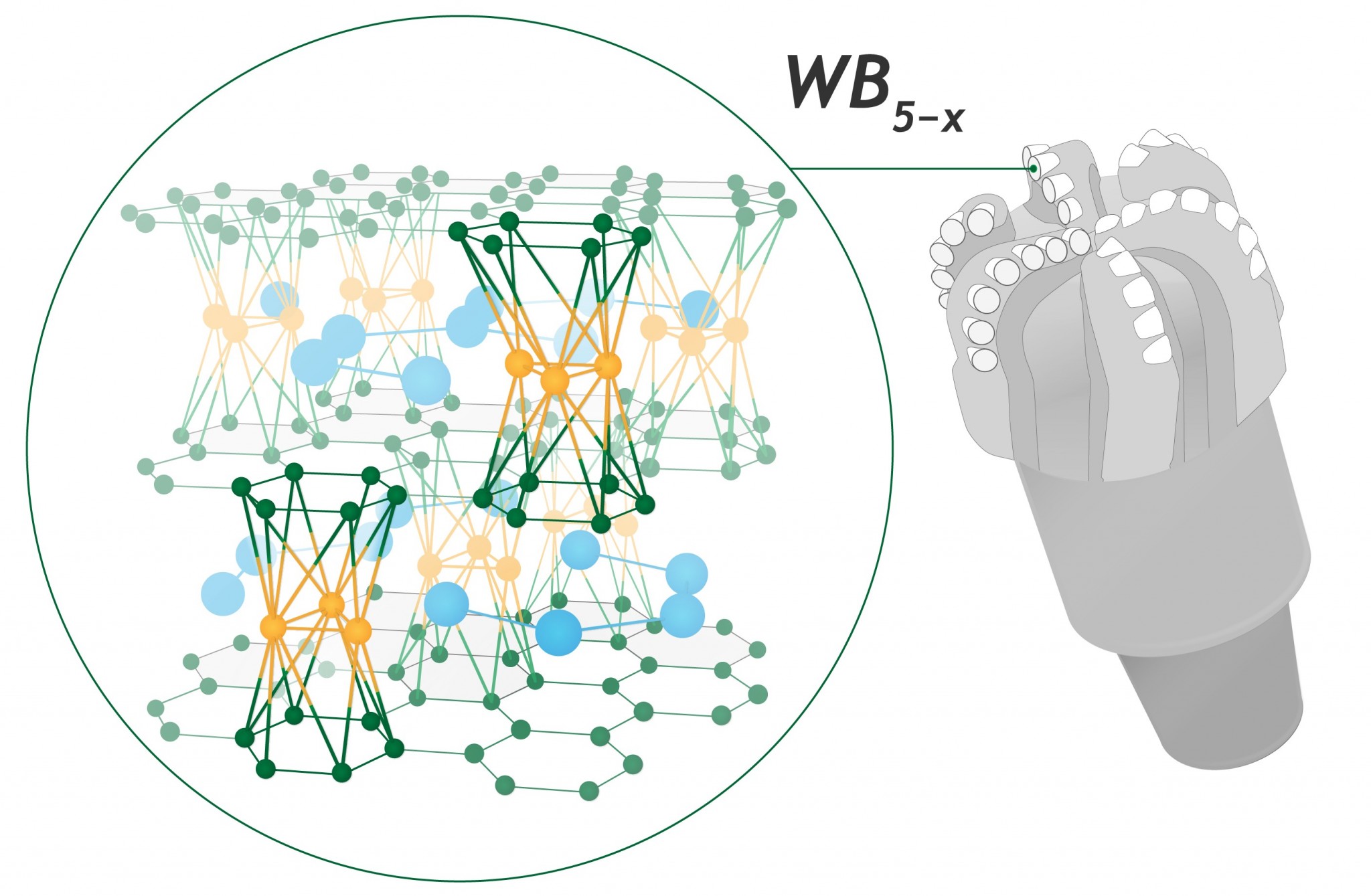 Researchers have cracked a 1960s puzzle about the crystal structure of a superhard tungsten boride. Credit: Pavel Odinev / Skoltech

“Experimentally, the crystal structure is determined by X-ray structure analysis. But the large difference in atomic scattering cross sections (heavy tungsten compared to light boron) renders positions of boron atoms in transition metal borides hardly discernable by X-ray diffraction. This can be resolved by neutron diffraction, but any diffraction method can only give the average structure. If the material is disordered, the complete knowledge of its crystal structure (including local arrangement of the atoms) can be obtained only using a combination of experimental techniques (X-ray, neutron diffraction) and computational methods of materials science,” Alexander Kvashnin, Skoltech senior research scientist and first author of the study, explained.

In 2017, Andrei Osiptsov and Artem R. Oganov at Skoltech proposed an idea to search for superhard materials to be used for producing composite cutters installed on bits, which are used for drilling oil and gas wells. The idea was well received by Gazpromneft STC LLC, and the collaboration began between the company, Skoltech, and the Vereshchagin Institute for High Pressure Physics of the RAS. Researchers led by Artem R. Oganov of Skoltech and MIPT predicted the existence of WB5, tungsten pentaboride, which was expected to be harder than the widely used tungsten carbide and having comparable fracture toughness. The compound was successfully synthesized in the lab at Vereshchagin Institute to complete the research loop. In the new paper, Oganov and his colleagues show that the long-debated “WB4” and the newly predicted WB5 are actually the same material.

“We studied the W-B system in order to predict stable structure of higher tungsten borides as we had already known about this long-standing puzzle. Predicting a new WB5 structure was a surprise, especially as it has exciting properties as high Vickers hardness and fracture toughness and remains stable at very high temperatures. Then we thought this material should find application in the industry. Our colleagues from the Vereshchagin Institute successfully synthesized it. The diffraction patterns matched theoretical prediction very well, except a few weak peaks that were present in theory, but not in the experiment. Our predicted WB5 has perfect single crystal structure, but as we showed, experiments produced a closely related disordered WB5-x material,” Kvashnin explained.

The researchers synthesized this new material, measured its properties, and revealed an unexpected connection between the two compounds: the new material has a crystal structure derived from the WB5 structure, with some amount of disorder and nonstoichiometry (this means that proportions of its elemental composition cannot be represented by a ratio of small integer numbers). Thus, the new material was denoted not as WB4 but as WB5−x. Its crystal structure was utlimately predicted by USPEX, an evolutionary algorithm developed by Oganov and his students, and elaborated by a microscopic lattice model.

Since WB5-x is relatively easy to synthesize, its excellent mechanical properties and stability at high temperatures make it a very promising material for many technologies where tungsten carbide-based composites dominated in the last 90 years.

“This puzzle is solved in full detail. We have a detailed microscopic description of this material and its structure, we know the range of chemical compositions it can adopt, and its properties. Other exciting puzzles are waiting for theorists’ attention,” said Artem R. Oganov.

Other organizations involved in this research include A. M. Prokhorov General Physics Institute of RAS and Vereshchagin Institute for High Pressure Physics of RAS.