The ‘Arche’ Center and the Skolkovo Institute of Science and Technology (Skoltech) present on October 8, 2020 at 19:00 a lecture by Anton Ivanov “Space revolutionaries. How small satellites have changed exploration of space”

Today, more than 16 thousand satellites are orbiting our planet, and about a thousand of them are small spacecraft, or CubeSats. Since the beginning of the 21st century, CubeSats have taken over large and expensive vehicles, and they have revolutionized the field of Earth remote sensing. Nowadays, commercial companies that started from “garage” offer images of the Earth that are updated daily. 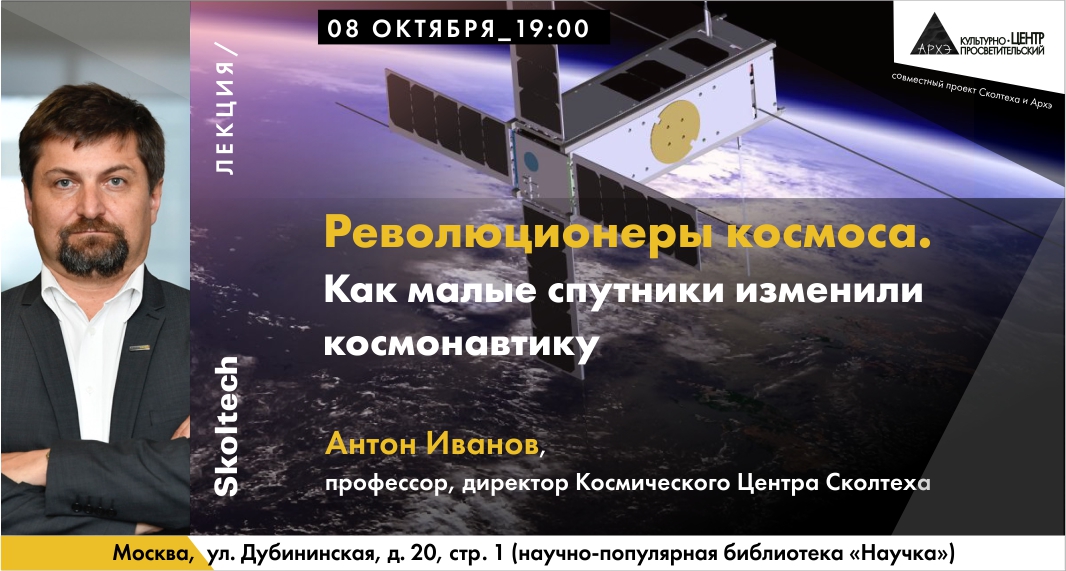 The miniaturization of electronics technology has spawned more than 20 startups in the field of M2M mobile communication for the  Internet of Things, and small devices make it possible to compete with industry leaders while being attractive to investors. For what purposes do CubeSats plow the vastness of the universe? Why has their number increased dramatically in the last decade? What startups are operating in space? How is artificial intelligence used on board spacecraft, and how are swarm structures used to explore the solar system?

Three fascinating stories about how small satellites revolutionized the use of space from the director of the Skoltech Space Center, Anton Ivanov, in a lecture on October 8.

Anton Ivanov is a graduate of MEPhI, Director of the Skoltech Space Center, Professor. In 2000 he received his PhD in planetary science from the California Institute of Technology. He worked at the Jet Propulsion Laboratory (NASA JPL), where he participated in the Mars Global Surveyor, Mars Odyssey, Mars Express and Mars Science Laboratory.

He was engaged in research at the Space Center of the Swiss Higher Polytechnic School in Lausanne (EPFL). Professor Ivanov participated in the CubETH and Astrocast projects, led the draft design for the CHEOPS satellite. The center, headed by Anton Ivanov at Skoltech, is engaged in the strategic development of next-generation space systems.

An online broadcast will also be accessible at the link: http://arhe.msk.ru/stream